Professor Tsumoru Shintake and the Quantum Wave Microscopy Unit at OIST are working on a new power generation system that could reap huge benefits. The project is called Sea Horse and it aims to harness energy from the Kuroshio ocean current that flows from the eastern coast of Taiwan to the southeastern parts of Japan. Sea Horse would use submerged turbines that anchor to the sea floor using mooring cables to convert the kinetic energy of sustained natural ocean currents into electricity.

That power is then delivered through to the land by cables. The researchers say that the initial phase of the project was successful and that it is now searching for industrial partners for the next phase. Many of the coastal areas in Japan are already studded with tetrapods, which are concrete structures shaped a bit like pyramids to help prevent soil erosion.

The turbines could be anchored on or near those pods. Shintake says that using only 1% of the seashore of mainland Japan and his turbines could generate 10 gigawatts of energy. That is an output equivalent to about ten nuclear power plants. 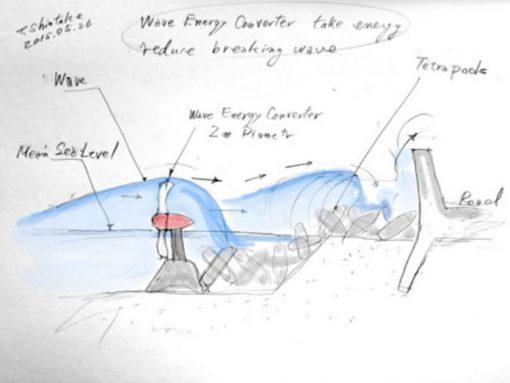 The turbine placed into the water could also help dissipate wave strength and protect the shoreline. The turbines could also be maintained using existing maintenance routes for the tetrapods. The turbines would be able to withstand strong forces, including typhoons.

The diameter of the turbine is about 0.7 meters and it has five blades inspired by dolphin fins. The team is preparing to install haf scale turbines with 0.35-meter diameter. Two of these will be installed and will power LEDs for a demonstration.