Scientists use AI to design self-replicating xenobots from frog cells

Last year, a team of scientists announced the development of “living robots,” a new type of organism made using cells harvested from frog embryos. That same team is back with an update on these “robots,” which they call xenobots, detailing a new scientific milestone: the ability to self replicate using existing cells.

Though life abounds, it nearly universally replicates in the same way — by growing, then eventually “shedding,” offspring. The xenobots detailed in the new study (via PNAS), however, are able to produce a new generation of offspring in a different way. As detailed in the study, the xenobots cluster together single cells into piles, which turn into new, slightly smaller xenobots a few days later

The next generation of xenobots — the “baby” ones — can then go out and form their own cell clusters to produce yet another generation of living robots, a type of biotechnology seemingly out of science fiction. The researchers took things a step farther, however, leveraging artificial intelligence to design a xenobot with more efficient self-replication.

Without the AI redesign, the researchers explain the xenobot “parent” is made from around 3,000 cells. The cell cluster forms into a sphere-shaped xenobot that struggles to produce a second generation and typically dies out afterward. An evolutionary algorithm was used to identify a xenobot design that increases the ability to reproduce. 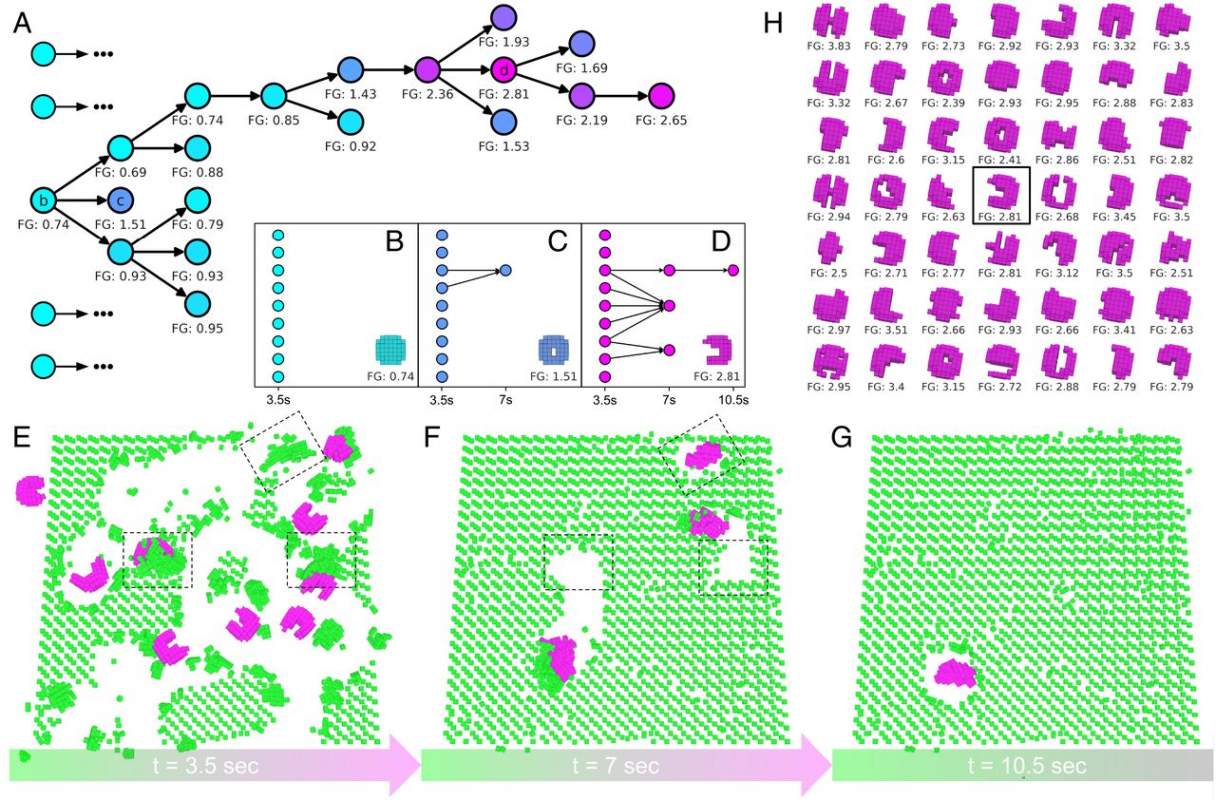 Billions of different potential xenobot shapes were analyzed by AI, which zeroed in on a Pac-Man-shaped xenobot parent that features a wedge-shaped “mouth.” The xenobot replicates using motion to gather the cells, which in this case are easier to essentially scoop up with the simple design. As a result, the xenobots produced four generations of offspring.

The result is self-replicating biotechnology that, the researchers say, may prove useful for addressing current and future issues in need of rapid solutions. One potential use for living robots, the researchers say, is leveraging these tiny organisms to gather microplastics out of water — a growing issue that has raised health concerns but that is difficult to address.

The University of Vermont notes in its announcement about the biotechnology that these xenobots are “entirely contained in a laboratory,” in addition to being “easily extinguished, and vetted by” ethics experts and government authorities.

Joshua Bongard, a robotics expert and computer scientist with the university, points to some of the exciting possibilities this work ushers in, noting, in part:

What presents risk is the next pandemic; accelerating ecosystem damage from pollution; intensifying threats from climate change. This is an ideal system in which to study self-replicating systems. We have a moral imperative to understand the conditions under which we can control it, direct it, douse it, exaggerate it.

The idea of using tiny structures to address pollution isn’t new — though most of those concepts focus on tiny nanobots, not self-replicating xenobots. In 2016, for example, a team of researchers developed graphene-coated nanobots that can be controlled using magnetic fields (via Science Alert). The graphene coating enables the nanobots to absorb lead, one of many pollutants in bodies of water.

Xenobots present a fascinating evolution in this concept, however, as they’re able to replicate, therefore introducing more xenobots without any additional human activity. The researchers point toward the AI aspect of this work as another promising solution for innovation.

Bongard elaborated, saying, “If we can develop technologies, learning from Xenobots, where we can quickly tell the AI, ‘We need a biological tool that does X and Y and suppresses Z,’ [and] that could be very beneficial. Today, that takes an exceedingly long time.”