Coffee, America’s favorite beverage, just got a little more convenient thanks to some food scientists with Martin Luther University Halle-Wittenberg (MLU). The researchers have created what they call a milk capsule; it is a puck-shaped solid bit of coffee creamer that dissolves after being put into a cup of hot coffee. Unlike the little cups of liquid creamer that currently exist, you can’t accidentally spill the milk capsule on your clothes.

If you want cream in your coffee at the moment, you have limited options: a large container of fresh cream, a small plastic container of portable liquid cream, or powdered creamer product. Fresh cream, while ideal, isn’t practical if you’re traveling, at work, or similar. Powdered creamer isn’t all the great tasting, and so you’ll left with the small plastic containers of cream. 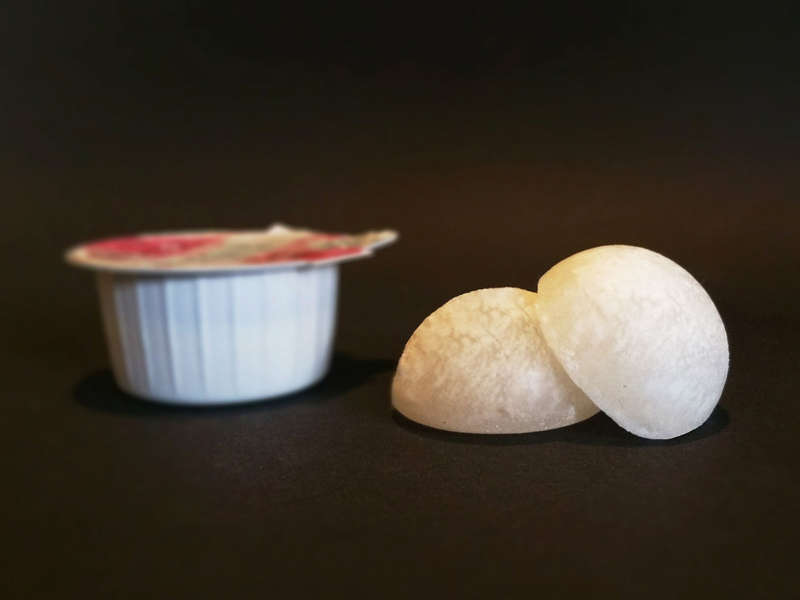 Those, however, are somewhat perilous in terms of transportation and they result in a lot of packaging waste. Addressing both issues is the researchers’ new milk capsules, which are shaped something like a puck with a dome. There are multiple benefits, one being that less packaging is necessary for a solid product, and the other being the lack of potential mess.

Production of the milk capsule is described as being fairly simple, and depends on a ‘crust’ around milk. In the case of a sweetened capsule, sugar is used to form a crust in a mold with milk in the middle. Putting the capsule in coffee causes the crust to melt, releasing the ‘milk-sugar’ product into the drink. A non-sweetened ingredient can be used in the place of sugar to produce ‘lightly sweetened’ milk capsules.

In the future, the researchers hope to also produce a non-sweetened version that doesn’t have sugar for those who don’t want it or can’t consume it. Milk capsules remain fresh for at least three weeks after production, and so while they’re not as shelf-stable as packaging coffee creamers, they’re still more convenient than fresh cream or milk. Assuming the now-patented milk capsules can be authorized by regulatory bodies as safe for sale and consumption, we may see them on grocery store shelves.