Samsung has taken the wraps off The Premiere, an ultra-short-throw projector offering a 4K resolution and a number of other high-end features. The Premiere joins Samsung’s Portfolio catalog, giving consumers a new option for setting up their home theater. The company says its new projector, among other things, has a mode that presents movies exactly as the director intended them to be viewed.

You may be familiar with Samsung’s Lifestyle portfolio due to The Serif and its newer The Frame, a unique television that looks like a piece of artwork hanging on the wall. The Premiere joins these televisions, offering a larger, more immersive experience for those who want a movie-like environment in the comfort in their own home.

Because this is an ultra-short-throw projector, it can be positioned right under the wall where the image is projected, bypassing the otherwise unsightly appearance of a large projector hanging from the ceiling or mounted high up on a wall. Samsung says this laser projector will be available in 120-inch and 130-inch models respectively listed as LSP7T and LSP9T. 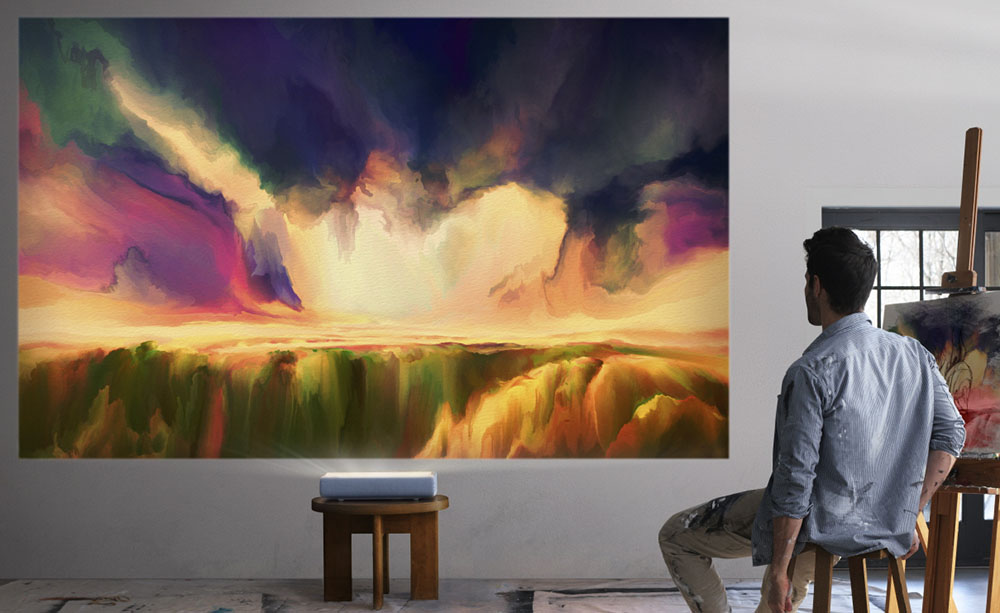 In addition to offering a 4K resolution, The Premiere model LSP9T will be the first triple laser projector certified with support for HDR10+, according to Samsung. Users will enjoy up to 2,800 ANSI lumens, as well as a Filmmaker Mode that presents movies the way the director intended them to be watched, Samsung explains. This emphasizes the company’s ‘home cinema’ marketing.

The Premiere packs the Samsung Smart TV platform, including mobile connectivity features like screen mirroring and Tap View, as well as support for all of the major streaming apps like Netflix and Hulu. Audio, meanwhile, includes Acoustic Beam surround sound and built-in woofers. Samsung will release The Premiere in multiple markets, including the United States, Europe, and Korea, among other unspecified regions. The price is unclear at this time.