Samsung takes the lead in the global smartphone market for Q3

Q3 2020 was very good for the smartphone market as more devices than expected shipped during the quarter. According to IDC, 353.6 million devices were shipped during Q3. While shipments are strong, it was a decline of 1.3 percent year-over-year. IDC had predicted a nine percent year-over-year decline. IDC says that growth is largely attributed to the reopening of economies globally as restrictions due to COVID-19 were eased.

Some markets grew faster than others. India, the second-largest global market, saw strong volumes during the quarter despite concerns from the pandemic. Other emerging markets, including Brazil, Indonesia, and Russia, experienced strong growth. IDC says that while there was some pent-up demand that fueled growth, it was mainly heavy promotions and discounts accelerating growth in those markets. Lots of the increase was in the low-end market, which adds pressure on vendors.

During the quarter, Samsung regained the top position globally, with 22.7 percent market share shipping 80.4 million devices. That represents a 2.9 percent year over year growth. India was the largest market for Samsung, accounting for 15 percent of its volume and helping the brand grow nearly 40 percent year over year. Much of its strong performances in the under $250 price range. In the US, Samsung did well with its A series, Note 20, and Note 20 Ultra, with those devices making nearly 20 percent of its total volume. 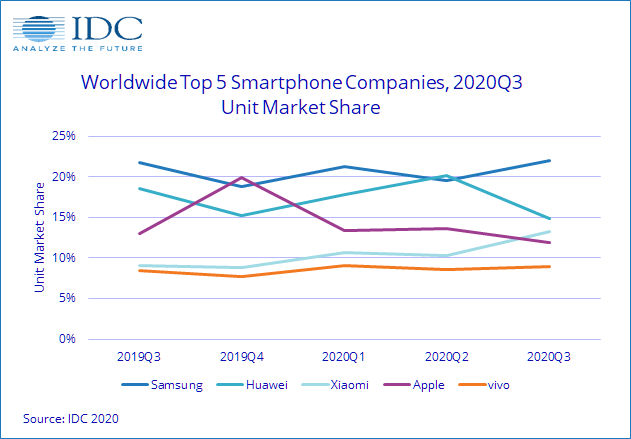 Huawei fell from the top spot into the second position, shipping 51.9 million smartphones and holding 14.7 percent of the market. That’s a significant drop of 22 percent year-over-year partly attributed to increased impact from US sanctions and a stiff decline in China. Xiaomi shipped 46.5 million devices taking the number three spot globally, beating Apple for the first time. Xiaomi had 13.1 percent of the market and 42 percent growth.

Apple landed in fourth place globally, with 41.6 million units shipped, a decline of 10.6 percent year-over-year. The quarter marks the first time the company landed in fourth place with an 11.8 percent market share. The decline is mostly due to the delay in launching the iPhone 12 series, typically launched in Q3. Most Apple devices shipped were iPhone 11 range, with the iPhone SE still selling very well. Fifth place went to Vivo, shipping 31.5 million units with a 4.2 percent increase year-over-year and 8.9 percent of the market.