Samsung has just announced a new pair of OLED displays with unique features: one is transparent and the other is a mirror. The mirrored display offers up a typical reflection of someone standing in front of it, but is also able to add augmented imagery overtop, like a necklace around the user’s neck. The transparent display was demonstrated as a billboard ad, with advertising information appearing on a clear panel, and background scenery still visible.

Both displays feature Intel’s RealSense 3D camera technology. This is especially apparent with the mirror screen, which Samsung already has plans to use as a virtually enhanced fitting room. Customers could simply stand in front of the display to see how items like clothing or jewelry would look on them, then decide if they want to try it on. 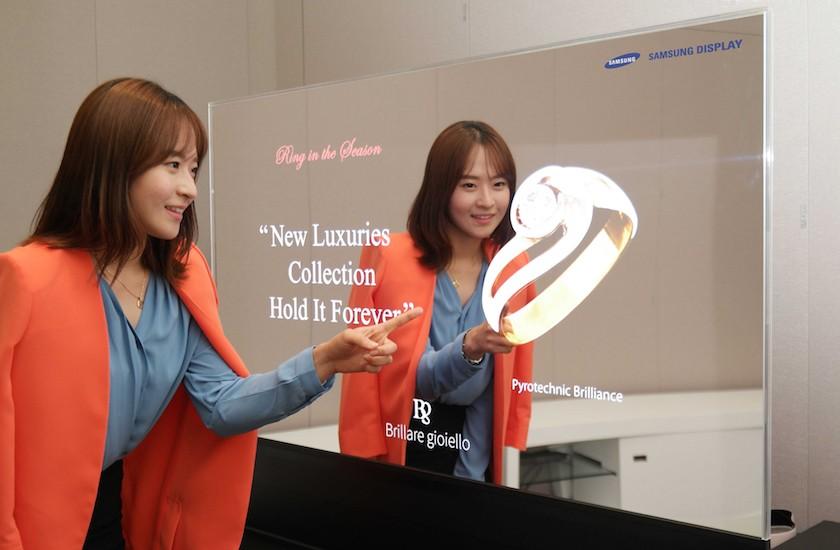 Samsung didn’t present any concepts for the clear display other than for advertising purposes. The company isn’t the only one working on transparent screens, but they boast a number of improvements over rivals, such as a sharper and more colorful image, wider viewing angles, and transparency levels up to 40%, much more than the 10% possible with LCDs.

The mirrored display definitely won’t be making its way into consumer products soon, but Samsung hopes it can be used to introduce augmented reality into situations such as retail, smart home, automotive, and medical markets. The mirror OLED is said to have advantages like a sharper, higher contrast image, with faster response times than LCD.