You run your social life in the cloud. You handle your email in the cloud. You might even write your documents, store your music and keep your backups in the cloud. Why not do away with local computing altogether? That’s the premise of Google’s Chrome OS, relying on just a browser to be your window to the all-purpose web. The Samsung Chromebook Series 5 is one of the first notebooks to give Chrome OS a go, in the case of our Three powered machines offering 3G to release you from the WiFi teat, too. Can we really live in the cloud, or are we destined to tumble back to earth with a bump? Check out the full SlashGear review after the cut.

Chromebooks are built to a budget – Samsung is offering the Series 5 in the US at $429.99 for the WiFi-only and $499.99 for the 3G version, while in the UK it’s £349.99 for the WiFi-only model and £399.99 for the 3G – and so you get a mixture of laptop and notebook functionality and style. Our white review unit is eye-catching, certainly, with a glossy lid and gently rounded black plastic elsewhere. Stylistically it reminds us of the N310 netbook, though we wish the rubberized chassis had been carried over too.

Open the thin lid up, and there’s a reasonably sized bezel around the 12.1-inch 16:10 display. Samsung has used one of its so-called SuperBright LED panels, running at 1280 x 800, and we can’t fault the quality or colors; it’s also non-gloss, which makes it easy to use without reflections. Above is a 1-megapixel webcam. The whole thing weighs in at 3.26-pounds, which makes it heavier than a netbook but reasonable for a notebook. 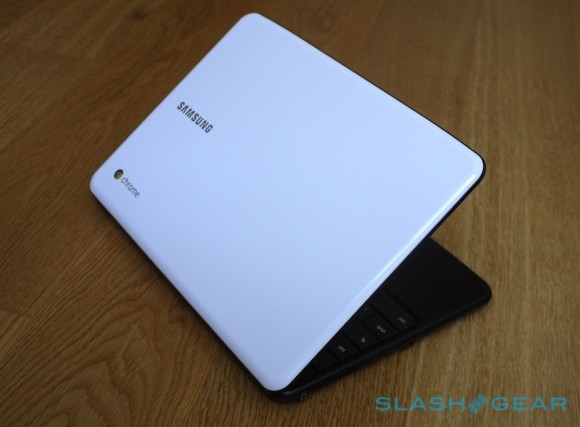 The keyboard and oversized touchpad look somewhat cheap but are decent to type on, the keys themselves being large and nicely spaced. Cost constraints mean you don’t get backlighting. Because of the new Chrome OS the layout is somewhat different to what you might be used to on a Windows or OS X notebook: “ctrl” and “alt” in the lower left are broader than normal, the caps-lock has been swapped for a dedicated Google search key, and the function key row has been replaced by feature buttons. As well as dedicated back/forward keys, there’s a refresh button, full-screen button, window-switching, brightness and volume control.

We may be expected to start our new lives scurrying around the internet pipes, but Samsung and Google do at least realize that we still have peripherals we might want to plug in. Ports on the Series 5 include a proprietary VGA out (with a bundled adapter cable in the box) and two full-sized USB 2.0, along with a mic/headphones combo, a SIM slot (with a Three SIM preloaded) and a full-sized SD card reader. No ethernet port, however, with WiFi b/g/n or, on certain models, 3G to get you connected. 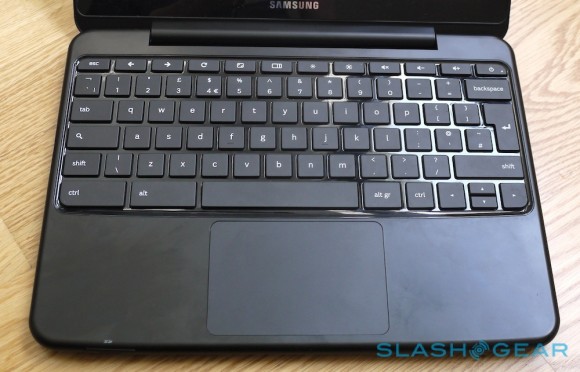 Inside is where things get shaky. The Chromebook Series 5 may be larger than a netbook, but it uses the same Intel Atom processor as you might find in one: a 1.66GHz N570, to be precise, paired with integrated graphics and 2GB of RAM. Samsung’s speakers are weedy and underwhelming too, lacking bass and grating at the top end of the volume range. 16GB of flash storage underlines the web-centric focus.

Overall, then, it all works, but it doesn’t exactly feel premium. That’s okay when you’re spending a couple of hundred on a netbook, but the Chromebook Series 5 occupies the blurred middle-ground between netbook and notebook. It’s a space where strong competition has driven regular Windows laptop prices down to tempting levels.

The browser is undoubtedly the most commonly-used app on most people’s computers these days, so Google’s argument makes quite a bit of sense: why not junk the rest and just live online? Chromebooks promise resilience from viruses and malware – because just about everything is held at bay in the cloud – and utter simplicity, too. If something stops working then you close the browser tab and start again.

For those suffering the blue screen of death or Word disappearing and taking their carefully-crafted thesis with them, that all sounds tempting. Even if you’re an adept computer user yourself, you probably have friends and family who aren’t so skilled, and who likely turn to you for their unofficial tech support. Wouldn’t it be better to point them to a Chromebook and let them scamper freely across the web? 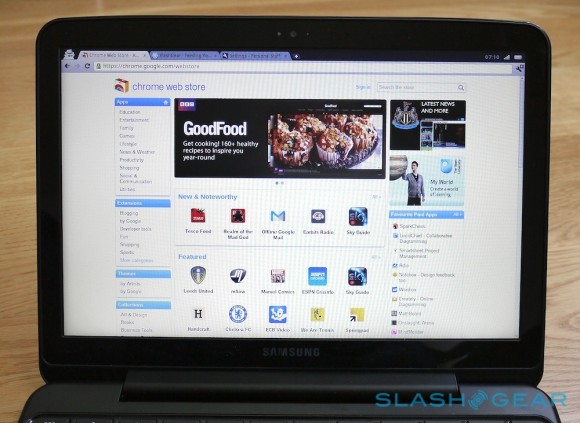 In some ways, yes. Chrome is familiar from the regular browser already available for Windows and Mac, only now you can’t escape it: Chrome OS has no Start menu or dock bar, no way to minimize the app and see the desktop. In fact, Chrome is the desktop. Where a Windows user might expect to find minimize/maximize and close controls in the top right corner, there’s a clock, wireless indicator and battery gage. The settings icon to the right of the address bar now not only controls browser configuration but the few options Chrome OS allows you: user accounts, touchpad sensitivity, wireless networks and the like.

Go to Gmail, or YouTube, or Google Docs and it’s just as you’d expect from your regular computer. Your bookmarks – if you’re a regular Chrome user – are pulled across too. In fact, if you’ve already committed your online life to Google’s various services, getting up to speed is a simple matter of mashing in your password. Various optional apps bring things like IM+ (for instant messaging), TweetDeck (for Twitter) and Angry Birds (for, well, hurling birds) into your life.

Unfortunately, around about here is where things start to go rough at the edges. Angry Birds may be a suggested game in the Chrome App Store, but it doesn’t play nicely with the Atom CPU. Glitchy graphics are something we didn’t expect to see on a title that plays problem-free on our phone. Full HD YouTube videos were also more than the Series 5 could cope with, though 720p was manageable. Other cloud services – like Spotify, for instance – fall foul of the missing local app support; their music catalogs may be online, but they require a local client in order to access them. 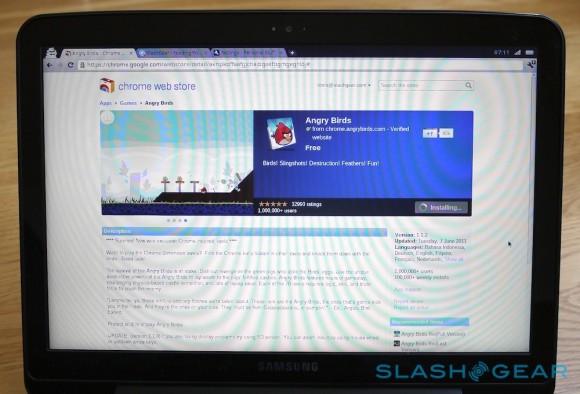 Then come the headaches of trying to step outside Google’s garden. Plugging in a mouse or a USB keyboard is fine, but try to access files on a USB stick or SD card and there are headaches galore. Some of those are merely UI head-scratchers – dragging & dropping may be a common practice on regular notebooks, but try to drag a file from your Chromebook to the little file explorer window that pops up when you plug external storage in and you’ll have no luck; instead, you have to save the file through the browser’s dialog – but others are more frustrating. The range of supported local file types is limited – JPG and PNG for images, MP3 and M4A for audio, MP4 and MOV for video – whereas Google’s online services like Gmail can handle a broader range. Ironically we often resorted to emailing a file back to ourselves so that Google’s online file viewer could display it.

If you want the cloud then you need a connection. Google was much maligned when Chrome OS first launched – on the Cr-48 developer machine – for the absence of offline support. Gmail, Google Calendar, your Google Contacts, everything demanded access to the internet in order to work. If you didn’t have a WiFi network handy or a 3G mobile connection, then your Chromebook was pretty much useless.

Google’s recent update to Gmail, Calendar and Docs, adding offline support, has partially addressed that. Just as in the regular Chrome browser, it’s now possible to cache certain aspects of each service locally, so that even without a connection you can continue to work. In the case of Gmail, that means you can browse through anything up to a week’s worth of messages in your inbox, assign labels and stars, create new emails and reply to existing ones. They’re saved until you next get online, when Gmail can sync again. 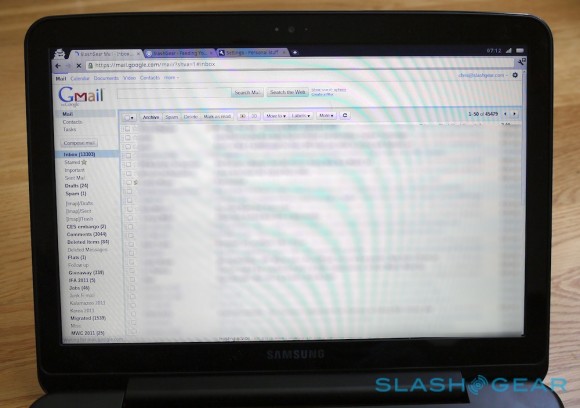 Calendar support is less flexible, allowing you to view your appointments and send schedule acceptances, but not actually create a new appointment. Similarly, Google Docs will let you read text and spreadsheets when offline, but you can’t create new ones or edit any existing ones. Presentations are completely inaccessible: forget running your next meeting from your Chromebook if you can’t get online while you’re there.

Altogether, it means the 3G-enabled version of the Samsung Series 5 makes a whole lot more sense than the WiFi-only model, unless you know for certain you’ll only be using it amid blanked WiFi coverage. Whereas integrated 3G is generally a luxury in a notebook, for a Chromebook it can be the difference between being able to work or being sat in front of a “can’t connect” message. In our test unit, Three UK charges £15.99 per month for 15GB of data, a healthy amount; in the US, Verizon offers 100MB per month free (for two years) or various prepay plans ranging from daily to monthly. Bear in mind you’re browsing the full internet, however, not some cut-down mobile version on your phone, and as such general use will consume more MB than you might expect.

Google and Samsung’s decision to use Intel’s Atom processor is, in part, because of the promise of longer battery life. The spec sheet promises up to 8.5hrs from the non-user-accessible 8,280 mAh pack; in practice, with a WiFi connection, we managed over seven hours of use before we needed to recharge. Of particular note are the standby times, with very little power used up between us closing the lid and opening it later. 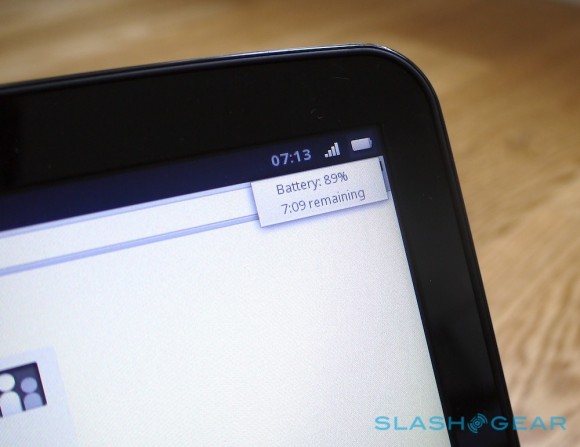 In many ways the Samsung Chromebook Series 5 – and indeed Chromebooks in general – makes perfect sense. Being able to throw open the lid of your notebook and get online in seconds, with little in the way of config or battery concerns, is a liberating experience. The Samsung design isn’t going to give Apple any sleepless nights, but it delivers in most of the places it matters: the keyboard, the display, the battery.

Unfortunately it also drops the ball when it comes to power, and the Atom processor proves incapable of handling even Chrome OS’ constrained list of applications. Google’s offline support, though recently improved, still makes connectivity assumptions that our daily use couldn’t live up to. With no WiFi or mobile signal the Series 5 was of less use than our smartphone. 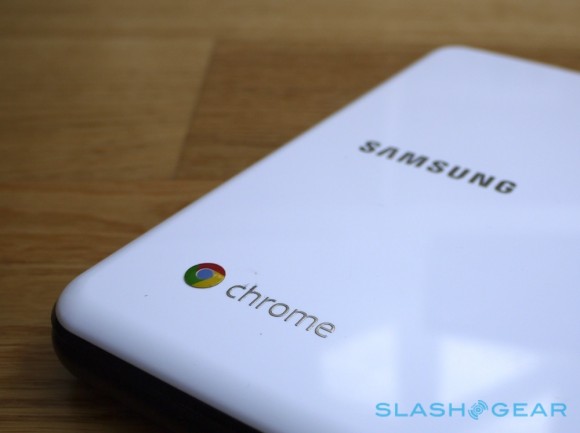 Chrome OS has promise, certainly. A simple platform for everyday users remains a tempting prospect; unfortunately, those we gave the Chromebook to in order to test the theory generally came back with questions about file support and other issues. In short, the problems had migrated from over-complexity in a regular notebook to under-complexity in the Samsung. We spend a lot of our time in the browser, yes, but not all of it, and ironically Chrome OS does a very good job of reminding us of that fact. If it was priced to suit its part-time companion functionality – perhaps a hundred or so less off the MRSP – then it would make far more sense. As it stands, though, we’d still opt for a regular notebook over Chrome OS.