The Samsung Galaxy Tab S7+ is a professional Android tablet the likes of which have not been available before now. We’ve used plenty of tablets over the past decade with Android inside, but none have really come close to being the pro-level piece of work that this Samsung unit represents. The Samsung Galaxy Tab S7+ is what every high-end tablet should be at launch: The best tablet* on the market today.

The front panel is 12.4-inches diagonally with 1752 x 2800 pixels across its face. This display works with Super AMOLED technology and an 84.6% screen-to-body ratio. There is just enough bezel here to be able to comfortably hold the device without touching the touchscreen, but not so much that said bezel seems to be in place without purpose.

This display has a 120Hz image refresh rate and HDR10+ capabilities. With 16M colors (NTSC) and the brightness we’re able to get with this panel, this is easily one of the most gorgeous display panels in a tablet device today. 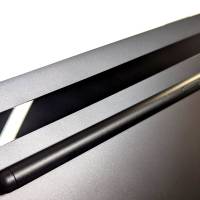 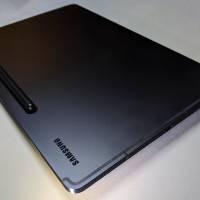 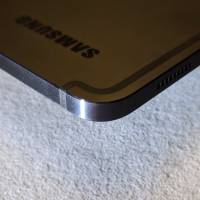 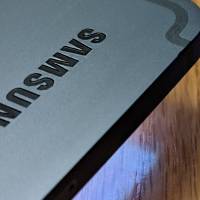 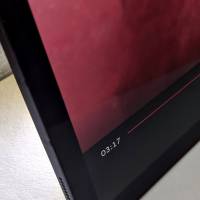 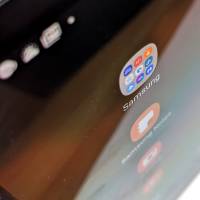 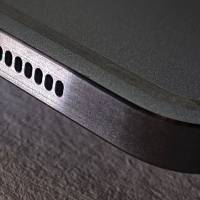 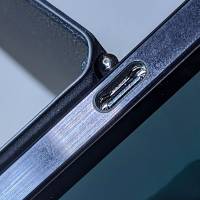 I’ve been using this tablet with the official Samsung Book Cover Keyboard since I took it out of the box. While I have no reason to believe that any part of this tablet is particularly fragile, its fine craftsmanship and full frontside glass panel make me feel like I cannot live without a case. The Samsung Book Cover Keyboard provides a front and back cover for the tablet, both sides attached by magnets, and they provide an encasement that makes the tablet feel complete, in more ways than one. 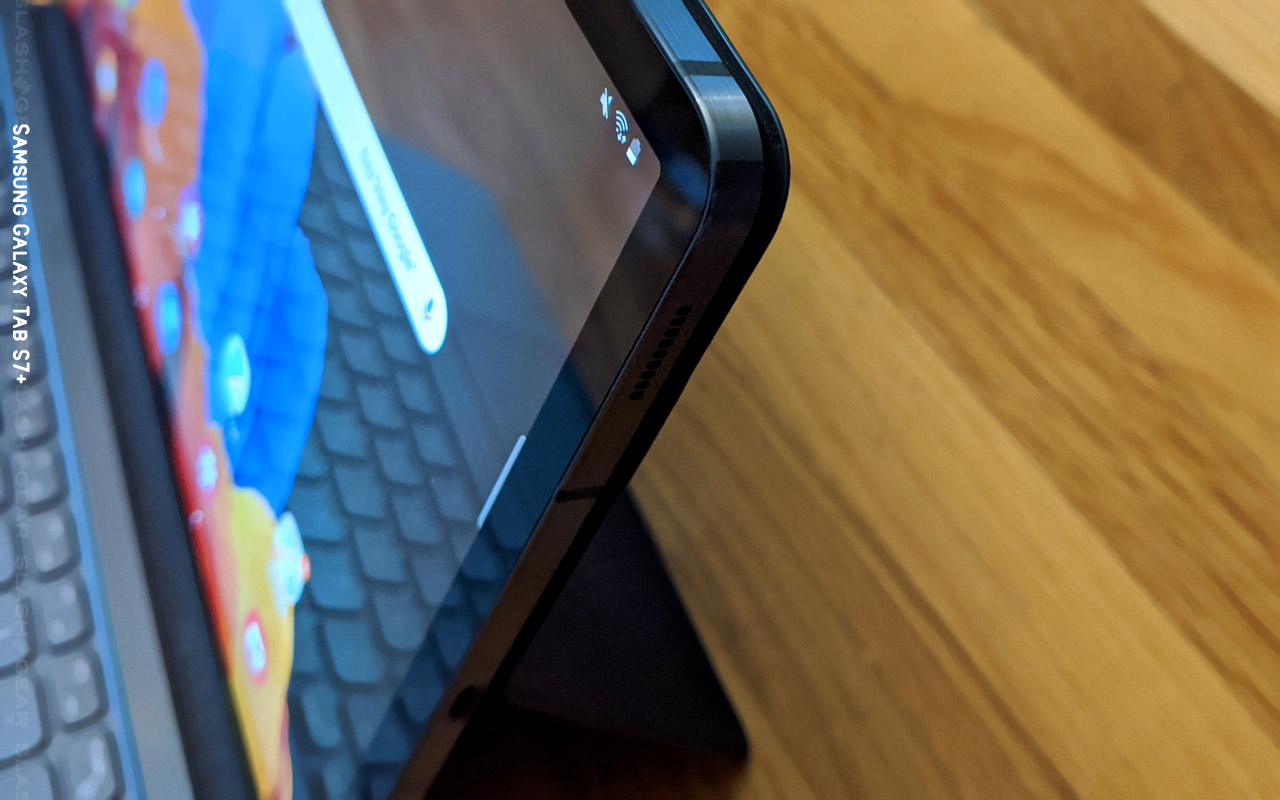 The back panel cover that comes with the Samsung Book Cover Keyboard also has a space for the tablet’s S Pen. It creates a sort of shell cover for the S Pen as the S Pen charges through the backside glass panel on the tablet. It feels like such a complete package that I’m legitimately surprised that the Book Cover Keyboard doesn’t come standard with the tablet in the first place. 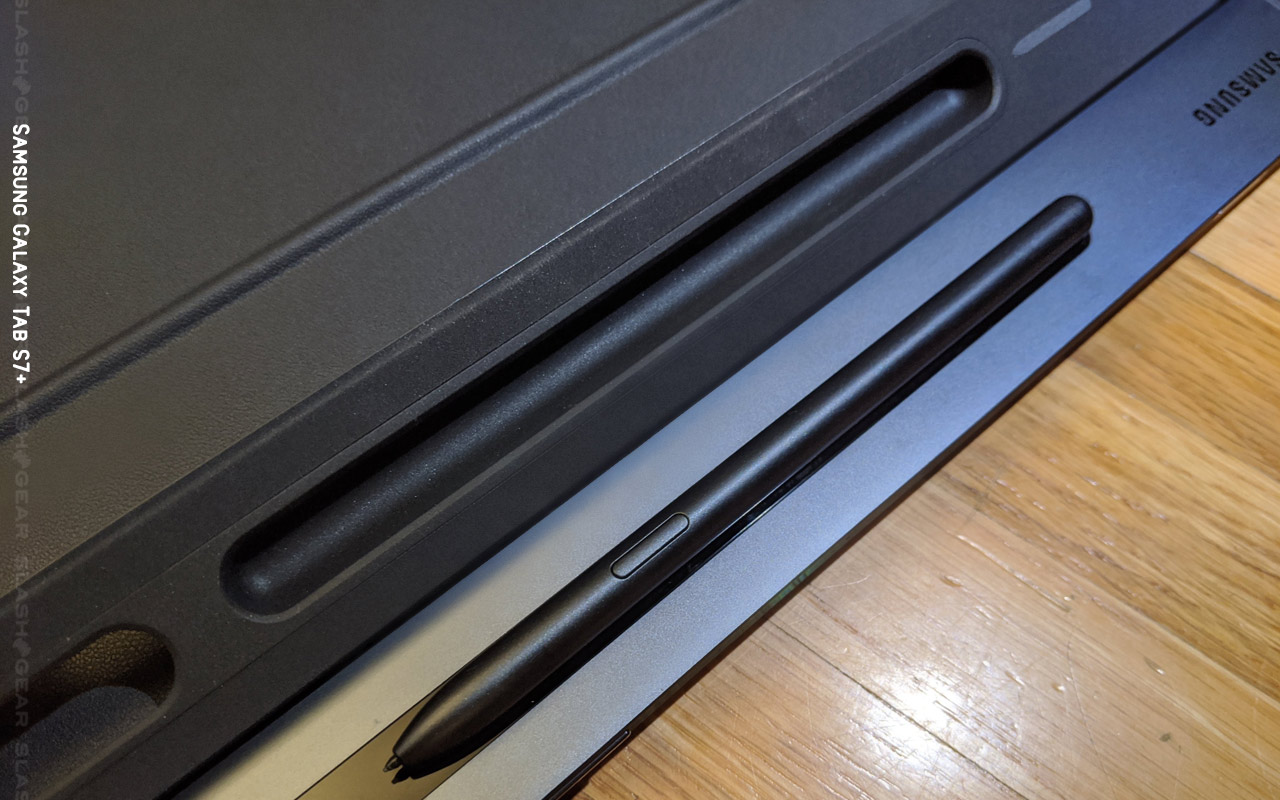 Battery life on this device is absurdly abundant. The easiest way to run it out is to work with augmented reality sketching and a display panel blasting at 100% brightness.

Because we’ve got a 10090mAh battery under the hood, it’s been difficult to run said battery out in under a day. Working non-stop throughout the day with the keyboard, typing text for emails and browsing the web won’t run the battery out in less than 8 hours.

If you use this tablet for design and art work, media consumption, and general gaming, you’ll find no trouble running it for a few hours a night for several days in a row before charging. When testing this tablet and charging every other night, we never really came close to running out of battery.

While I’d still rather have front-facing or even front-ported speakers on a device like this, Sony’s quad speaker system remains highly decent. We’ve got AKG Harman tuning here with Dolby Atmos sound, and it blasts more than enough volume with professional-sounding range for most users.

The camera setup on this device is fairly decent. Below you’ll see a collection of examples of photos captured with the back-facing camera setup.

The back-facing camera takes very, very nice looking photos just so long as it’s at least a couple feet away, and so long as it’s decently lit. Balancing the device so it’ll sit still – or better yet, using the Book Cover Keyboard to keep it sitting still – results in far better photos than any hand-held photo in anything indoors – or in the shade. 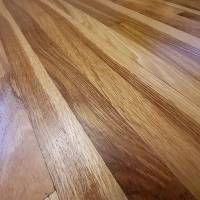 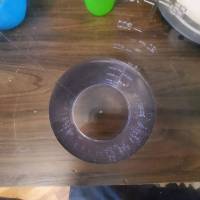 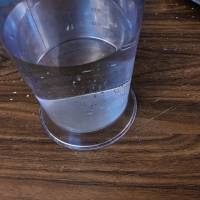 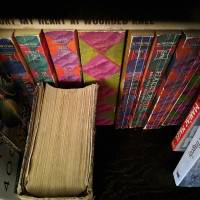 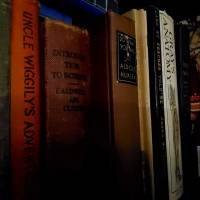 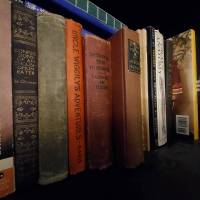 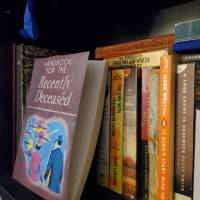 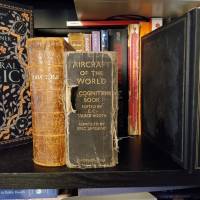 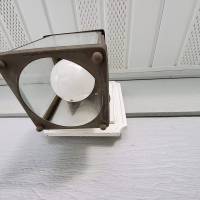 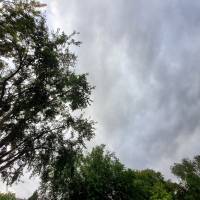 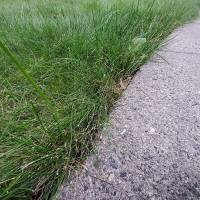 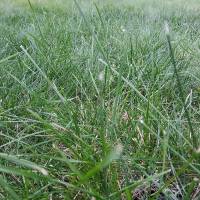 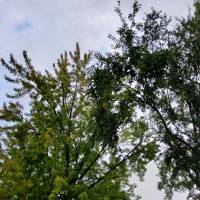 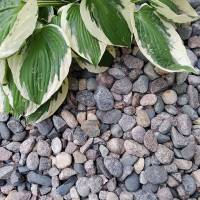 Apple has a clear focus on tablet software – they’ve literally re-named their iOS for their iPad lineup iPadOS. Microsoft has been focusing on touch-friendly inroads for Windows since the dawn of Windows 8, so the Surface line can essentially be a full powered laptop – in effect more powerful than any mobile tablet. 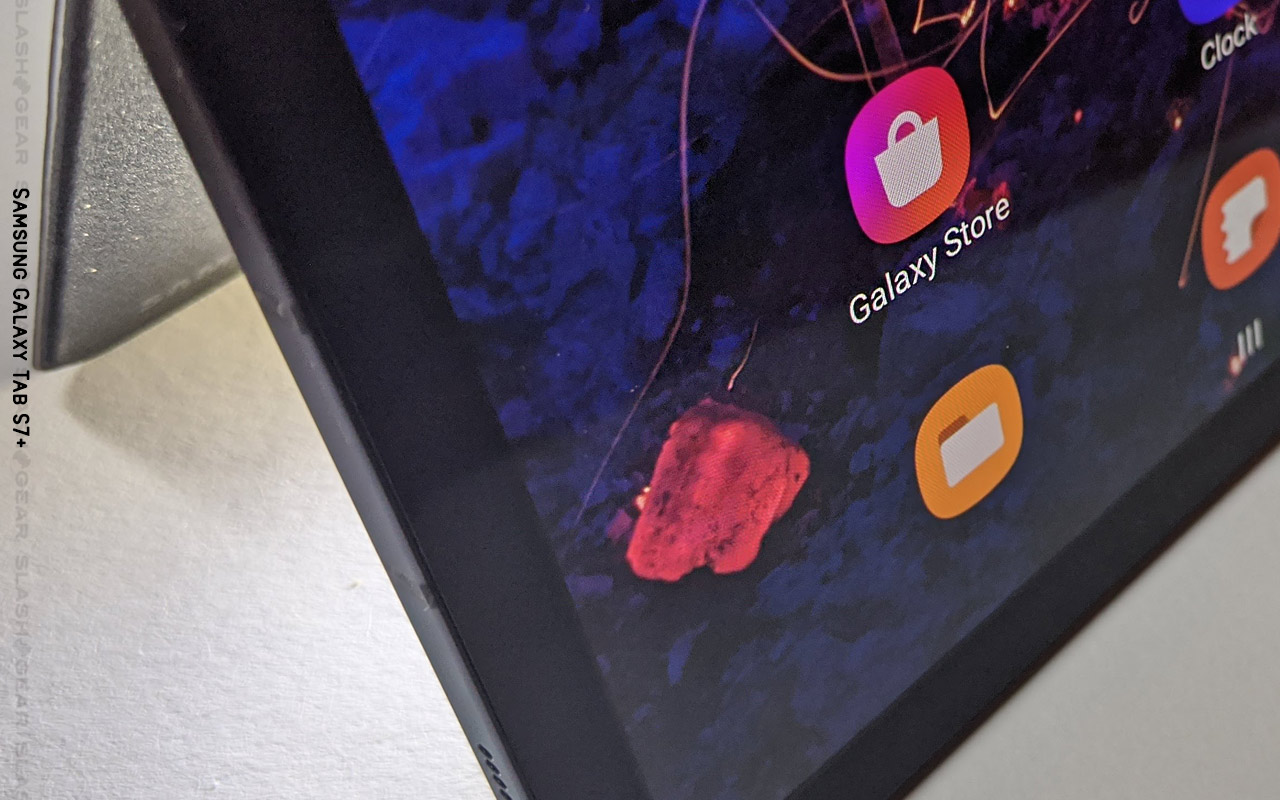 But with the Samsung Galaxy Tab S7+, we’ve got a device that feels like Samsung’s making a serious effort to make their tablet efforts (with Android) valuable to the end user. This isn’t just a giant smartphone anymore – and it’s not just pretending to be a tablet with a few heavy-handed extra-big software features that don’t ultimately add any value to the tablet experience beyond the first few uses where we say “wow, this is different.”*

This device has a Qualcomm Snapdragon 865+ processor under the hood, which means we’re rolling with enough power to easily handle any Android game or app.

*There’s an in-display fingerprint scanner on this tablet that works just as well as the Samsung Galaxy S20. I’m currently of the opinion that putting a fingerprint reader in or under a display panel is more of a “we could, so we did” type situation, so that may be the one example of unnecessary extravagance in this device. The non-plus version of the Galaxy Tab S7 has a side-mounted fingerprint reader, which I find far more reasonable. 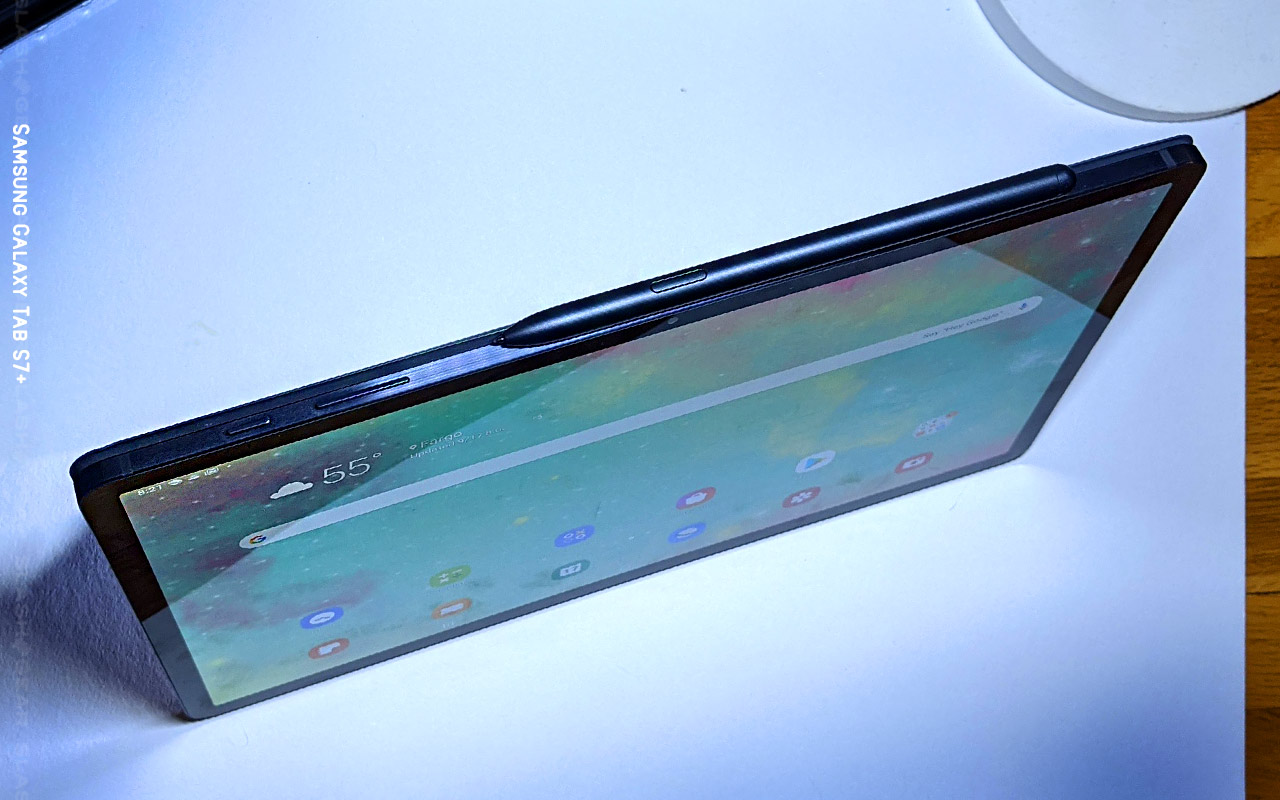 The first versions of the tablet will come in Mystic Silver or Mystic Black in September. Come October 16, 2020, we’ll also see Mystic Bronze.