Samsung Galaxy S21 Ultra, Plus leaks are a matter of good taste

Samsung’s set of three devices leaked in a few ways over the past several days, and today we’ve collected the lot. The Samsung Galaxy S21, Galaxy S21+, and Galaxy S21 Ultra will likely be released in the first couple of months of the year 2021 with a whole new design. The frontside bezels will be thinner, the punch hole will be smaller, and the back will have a camera array industrial design that takes the line out a whole new door.

The Samsung Galaxy S21 will once again take a position that’s not all that unlike the S21+, or S21 Plus. The Galaxy S21 and S21+ will have extremely similar specifications. The display on the Plus will be larger, with (likely) the same resolution, while both devices will have the same processor inside.

The backside array of the Galaxy S21 will have three cameras and an LED flash, all arranged in a camera bump in the upper corner. The bump will cascade over the side and the top of the phone, giving the entire device a more singular sort of look and feel. The image you see above was leaked by Sakitech.

The Galaxy S21+ will further exemplify the key elements of this new industrial design age for Samsung. In the past several versions of the Galaxy S family of devices, the camera array looked more like a “if we must” sort of situation. The bump was there because it needed to sit above the rest of the phone.

With the Galaxy S21+, the array hugs the side and top of the phone. The cameras appear to live within the element that surrounds the entire device. Samsung combines the metal/plastic combination of elements around the phone with the camera array at the back, giving the whole phone a more simple, powerful look and feel. You’ll also find imagery here made by Snoreyn for Let’s Go Digital. 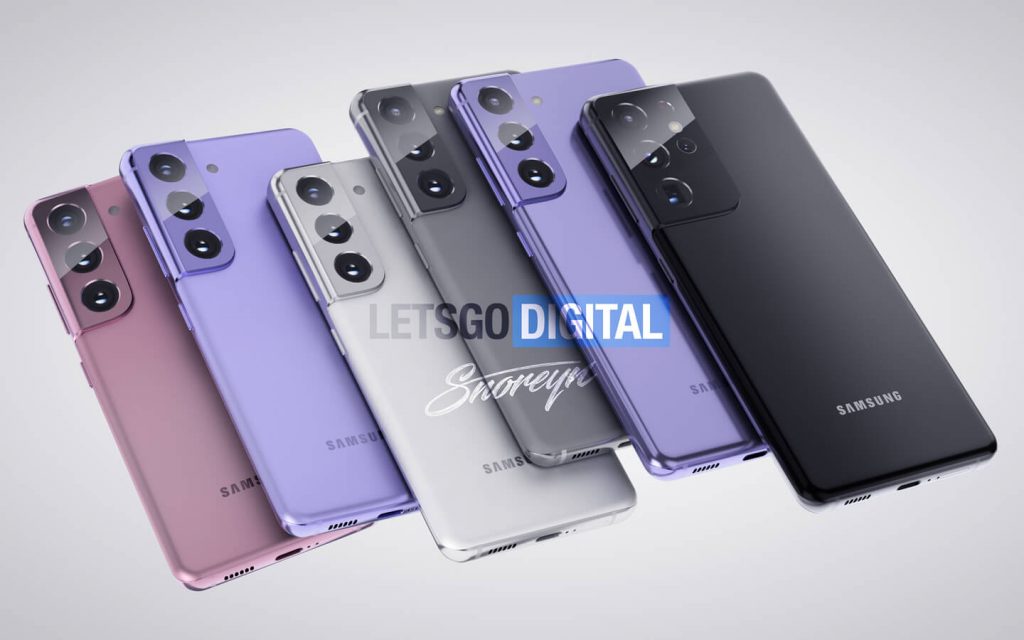 The Galaxy S21 Ultra here looks just as thick as the Galaxy S21+, which would indicate that there is not room for an S Pen housed within. It could be, instead, that Samsung is planning on making the Galaxy S Pen a separate accessory, not unlike what Apple does with the Apple Pencil.

The Galaxy S21 family will likely be revealed near the end of January or in early February 2021. It would not be shocking to see the Galaxy S21 release date appear in late February 2021. These devices will very likely launch in black, silver, and possibly some form of violet. Cross your fingers for one or all of these devices to appear in Slime Green, but don’t hold your breath!