Samsung either has an addiction or a compulsion: whatever the reason, the company can’t help pumping out Galaxy S 4 variants, like the Samsung Galaxy S 4 Active. A waterproof, dust-proof version of the flagship Android smartphone, the Active model toughens up with a butch new casing and a few tweaked features. Still, though, at its core it’s the S 4 we know and love, but is it the best version so far? Read on for our full review.

For the most part, Samsung has copied across the specifications of the Galaxy S 4 to the Galaxy S4 Active. Both run a 1.9GHz quadcore processor with 2GB of RAM and Android 4.2.2 with Samsung’s own TouchWiz interface, and each comes with at least 16GB of internal storage along with a microSD card slot for adding up to 64GB more. 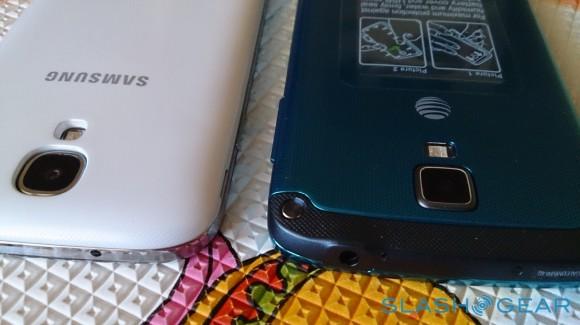 Connectivity is the same, too, so you get LTE and HSPA+, depending on market, align with WiFi a/b/g/n/ac, Bluetooth 4.0, WiFi Direct support, USB 2.0, NFC, and an infra-red blaster to turn the phone into a universal remote. There are also the usual accelerometer, proximity, gyroscope, digital compass, barometer, gesture, and light sensors, together with a finger-hovering sensor built into the touchscreen. Inside, you get the same 2,600 mAh battery.

The differences, then, are few. Both variants have a 5-inch Full HD display, but where the original S 4 uses a Super AMOLED panel, the new Galaxy S4 Active switches to a TFT LCD display. It also supports glove touch, for using the screen without having to take your gloves off first; useful, if you’re in the middle of working, or indeed winter. 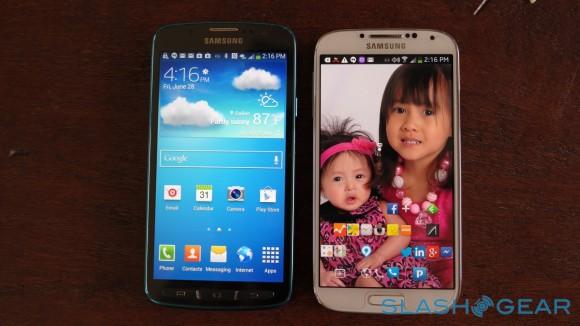 The other key change is in the camera. Both phones have a 2-megapixel front-facing camera, but the Galaxy S4 Active drops its resolution some, to 8-megapixels. The regular Galaxy S 4 offers 13-megapixels, but both have an LED flash.

Samsung is pretty keen to highlight the Galaxy S4 Active’s abilities – and its limitations. Despite what some have dubbed it, the Active is not a “rugged” device: there are no guarantees about it surviving drops or bumps. Instead, it’s intended for use by the pool, or in a workshop perhaps, where dust and splashes are likely candidates for clogging up a regular smartphone.

So, you get a tougher case, but not one which looks more like a dumper-truck tire than a phone. It’s slightly larger and heavier than the original, at 139.7 x 71.3 x 9.1 mm and 153g (versus 136.6 x 69.8 x 7.9 mm and 130g), but we actually find ourselves preferring the Active version overall. The plasticky feeling of the lightweight Galaxy S 4 casing is gone, replaced with a body that feels far more sturdy in the hand. The exposed metal screws are a neat touch, and the physical buttons – for menu, home, and back – are easily pressed and more tactile than the touch-sensitive keys on the original. 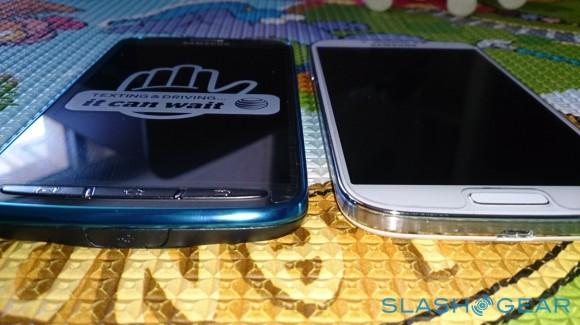 Of course, the main attraction is being able to dump your smartphone into a pool, or a bathtub, or even just your drink, and not have to worry about paying out of pocket for a replacement. Officially it meets IP67 standards; in practicality, that means you can be confident it’ll keep regular dust or sand out, and withstand depths of up to a meter for thirty minutes.

We’ve seen waterproof phones before, of course – Sony’s Xperia Z manages to be both stylish and withstand the wet stuff, for instance – but the difference with the Galaxy S4 Active is the almost complete lack of flappy ports. Where the Xperia Z has multiple little hatches that must be battened before it can take a dip, on the Galaxy S4 Active only the microUSB port has a flap. The headphone socket automatically seals itself, while the memory, removable battery, and SIM slot are under the back cover, which can still be pulled off like the regular S 4, but now has waterproof seals around the edges. 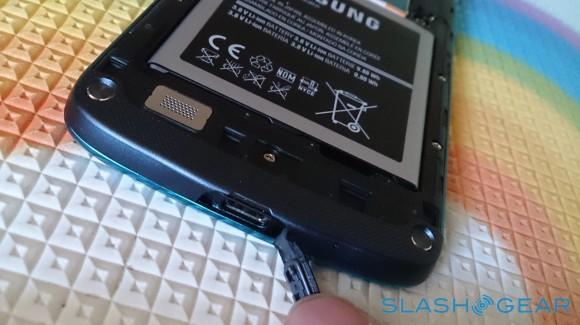 Unlike some earlier waterproof phones there are no screws to be fiddled with, or complex latches: the back of the S4 Active simply snaps off. When you replace it, Samsung says to make sure you press firmly around all the edges, making sure to remember to press around the cut-out for the camera too. 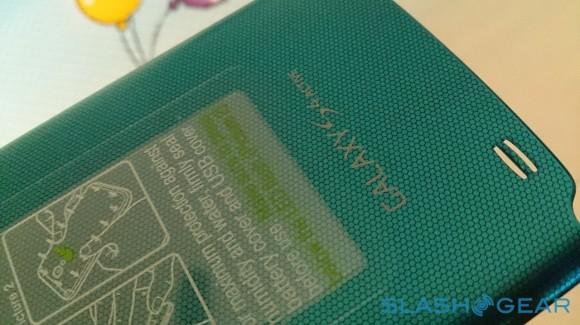 It’s an odd feeling to throw a phone into a pool. We overcame our reluctance, though, and set to dunking the Galaxy S4 Active like an Android-powered witch. Sure enough, when we retrieved the handset it worked as normal. In fact, we could even use it underwater, to a limited extent. Although the touchscreen won’t work, you can still control the camera using the physical buttons, for snapping shots of fish and the like.

With the same Snapdragon 600 processor, RAM, and other key internal components, there’s no change in how the Galaxy S4 Active performs. Come expecting the same experience as on the original Galaxy S 4, and you’ll not be surprised. With the Snapdragon 800 being used in the new LTE-Advanced version of the Galaxy S 4, that model is likely to show a more impressive turn of speed, but for the moment it’s expected to be limited to South Korea.

Megapixels are a contentious matter in the mobile industry right now. On the one hand you have Samsung’s own Galaxy S 4 pushing the top end, at 13-megapixels, while at the other extreme you have rivals looking to physically bigger pixels or optical image stabilization to increase picture quality. 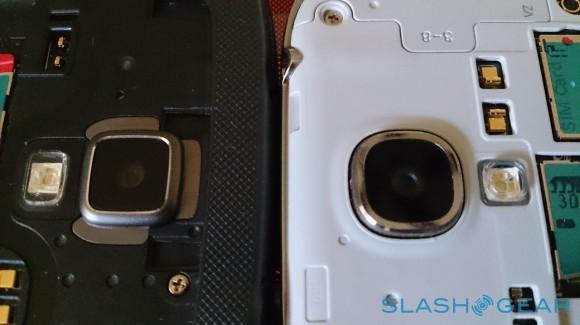 The Galaxy S4 Active falls somewhere in-between, with an 8-megapixel camera just like the older Galaxy S III. It gets almost all of the software of the Galaxy S 4, though – including native HDR mode, low-light, Best Photo, the oddly named Best Face and Beauty Face, panorama, and more – as well as Full HD 1080p video recording. The only thing missing is the dual-camera mode, which normally allows you to simultaneously shoot photos and videos with both front and rear cameras so that you yourself are in the shot. 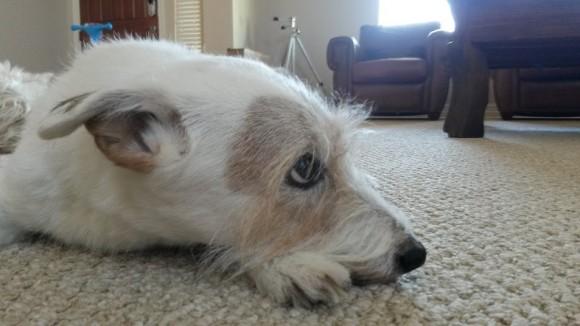 New, though, is the Aqua Mode, which allows the Galaxy S4 Active to continue shooting and filming while under the water. You’ll have to wait until you’re out until you can run through any of the native editing options, or indeed share images via Instagram or whichever other service you’re partial to, but it’s a neat trick.

With the drop in resolution, there’s unsurprisingly a slight hit in quality. You’ll need to be in near-ideal shooting conditions to really see it, however. With the original Galaxy S 4 we criticized the low-light performance at times, wondering whether the densely-clustered pixels of the camera might in fact be counter-intuitive for dealing with murkier scenes. The Galaxy S4 Active shows no real loss of quality in such conditions, though it does appear to have a different filter since frames with bright elements can often cause overspill and sacrifice detail in the process.

With the same processor, radios, and battery size, we were left wondering whether the Galaxy S4 Active’s switch to TFT LCD for the display would make a difference to battery life. In practice, even Samsung says the two will deliver roughly the same longevity and, with normal use – including a couple of calls, some messaging, push email turned on, some photography, a little YouTube playback, some web browsing, and some Google Maps with GPS turned on – we managed the same runtime from both, just over a full day. 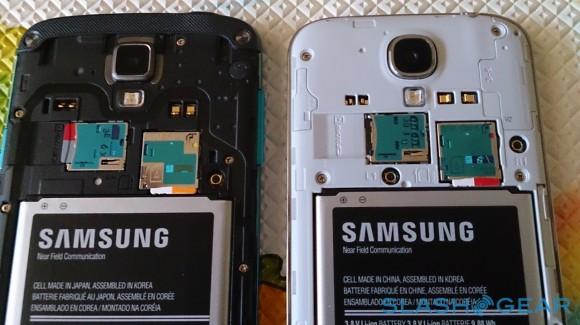 The Samsung Galaxy S4 Active almost did enough that we could legitimately ask why anybody would opt for the regular model. Still, the slight increase in bulk – which we’re not opposed to, seeing as we prefer the hand-feel of the Active version – and the slight drop in camera quality may frustrate some potential users, for whom the original Galaxy S 4 might still fit the bill. 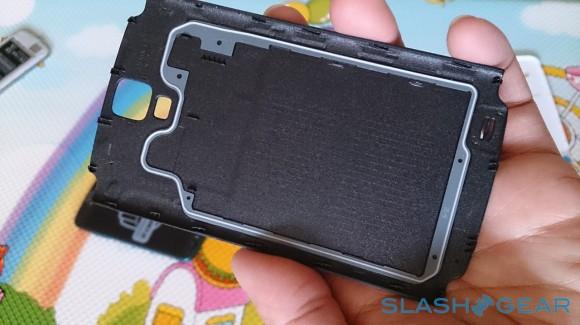 Nonetheless, while it may not quite be a “ruggedized” phone, it’s certainly more durable than most, and the water resilience makes it ideal for those with kids or pets. The reassurance factor of knowing that, even if you dump your phone into the sink, it’ll still keep on running as usual has plenty of appeal, and we like the fact that, though there’s a sober black version on offer, Samsung also makes bright blue and orange versions for those not afraid of color. In our opinion it’s one of the best-looking handsets in the company’s range.

For those reasons, we’d still opt it over the regular Galaxy S 4, even with the dip in the camera’s abilities. There’s an old saying that the best camera is the one you have with you; to that we’d add that the best camera is also the one which can withstand your lifestyle and shooting environment. The Samsung Galaxy S4 Active ticks those boxes, and that’s why it’s our pick of the Galaxy range.