Galaxy Note 9: Why fans are obsessed

Today we’re exploring the latest leak of the Samsung Galaxy Note 9, but we’re also having a chat about why this phone inspires such ravenous behavior in info-seekers and fans. Today we’re seeing confirmation of a double-block of elements on the back of the Galaxy Note 9, that bringing on perhaps the largest change between generations – acknowledgement of the finger-smudge on the camera lens cover glass situation.

Samsung’s been in the smartphone game long enough that they’ve got one seriously important sale-point element on their side. That’s trust – trust in quality. The hardware is made to the highest of standards in this personal handset industry, and consumers know that. Or they believe it, anyway. 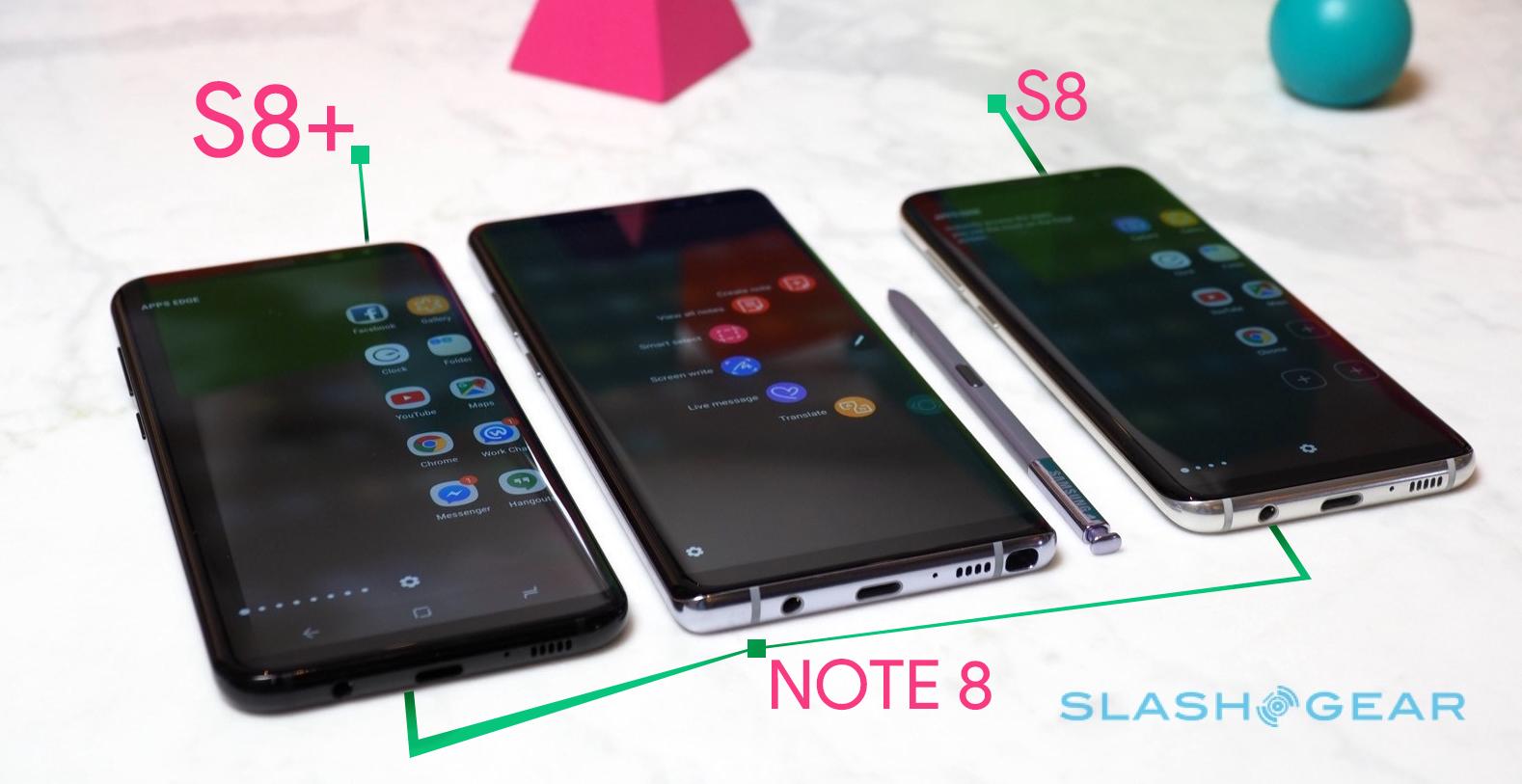 Belief in a brand’s products is a major deciding element in the sales of a smartphone here in 2018. Companies rise and fall depending almost solely on their public image. For direct consumer sales, a company must either be generations old or have some sort of hype machine with which to gather the masses hungry for change.

The Samsung Galaxy Note series is what Samsung sells as their hero of the 2nd half of the year, every year. In the early months of the year we’ve got the Galaxy S, then in the second half we’ve go the Galaxy Note. Galaxy S has traditionally brought out the biggest features, and Galaxy Note delivers what the Galaxy S promised, with a bit of extra power – and one very important extra bit of hardware.

The S Pen’s inclusion in the body of the Galaxy Note is more important to the buyer than actually using the device once they’re an owner. It’s like having an engraving on the inside of a ring. You won’t necessarily be looking at the inside of your ring all that often, but the fact that this ring has an engraving makes it feel more valuable to you than it might without any added features. 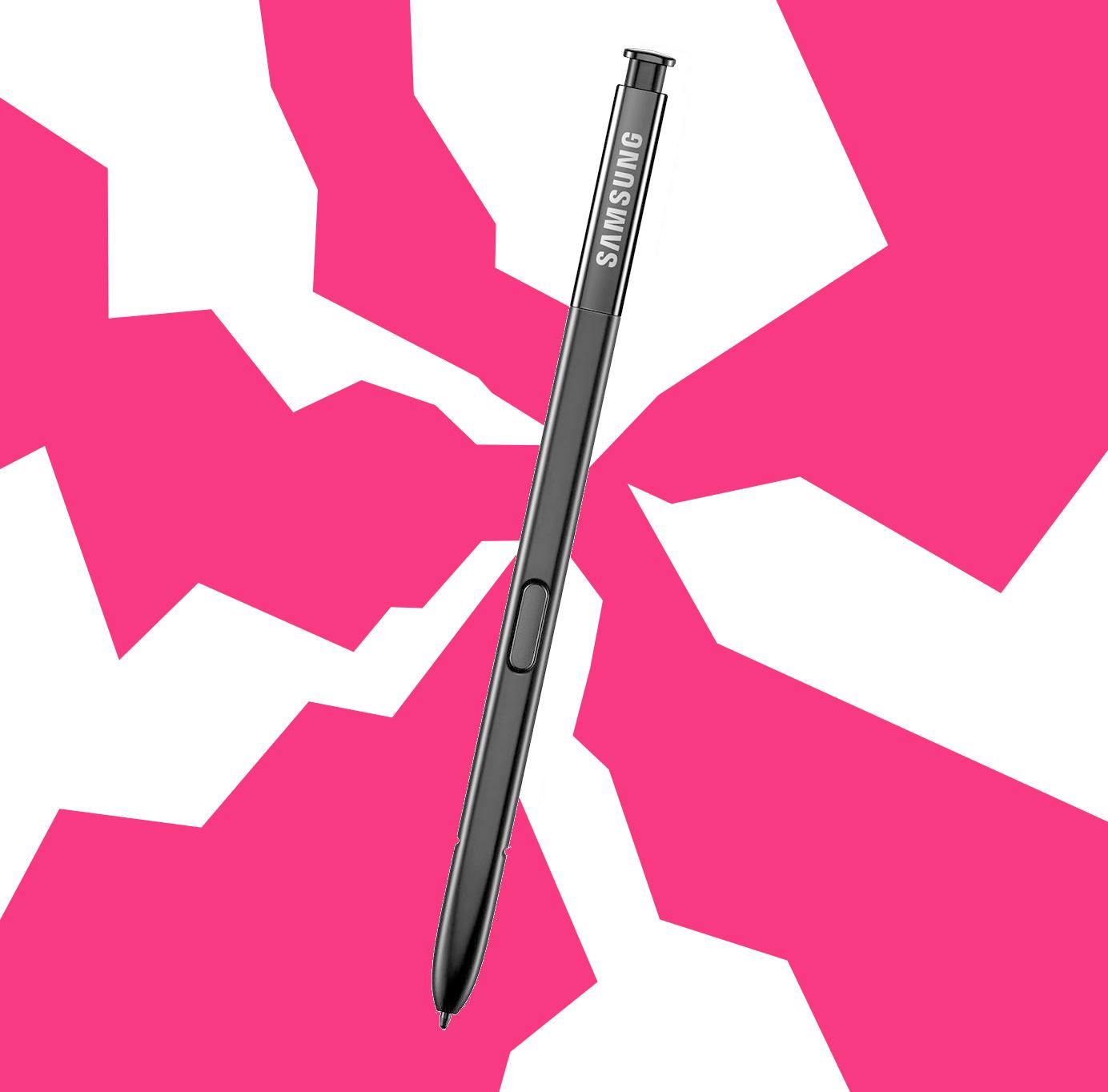 I’ve used a Galaxy Note for near a year – just a couple years ago. It was a pretty awesome device, and it did indeed have an S Pen. I frequently illustrate artwork and design, but I barely brought the S Pen out. The S Pen makes the Note feel like a pro-level piece of equipment. I might rarely use the added functionality, but I’m glad it’s there for when I do.

The S Pen does not appear to be changing this year – just like last year. There’s really not a whole lot else that can be done with a stylus of this size, especially when it’s got to fit in the body of this device. Any added space means less space for components in the Galaxy Note – and we don’t want any space taken away from the battery, or any other internal component for that matter.

Renders in this article are previews of a 3D design file created by MadMix. They can be found over at CGTrader too, if you’d like to pick one up. That’s also where the front render of the Galaxy Note 8 comes from here – but the back of the 8 comes from Samsung itself. Size comparisons are not exact. 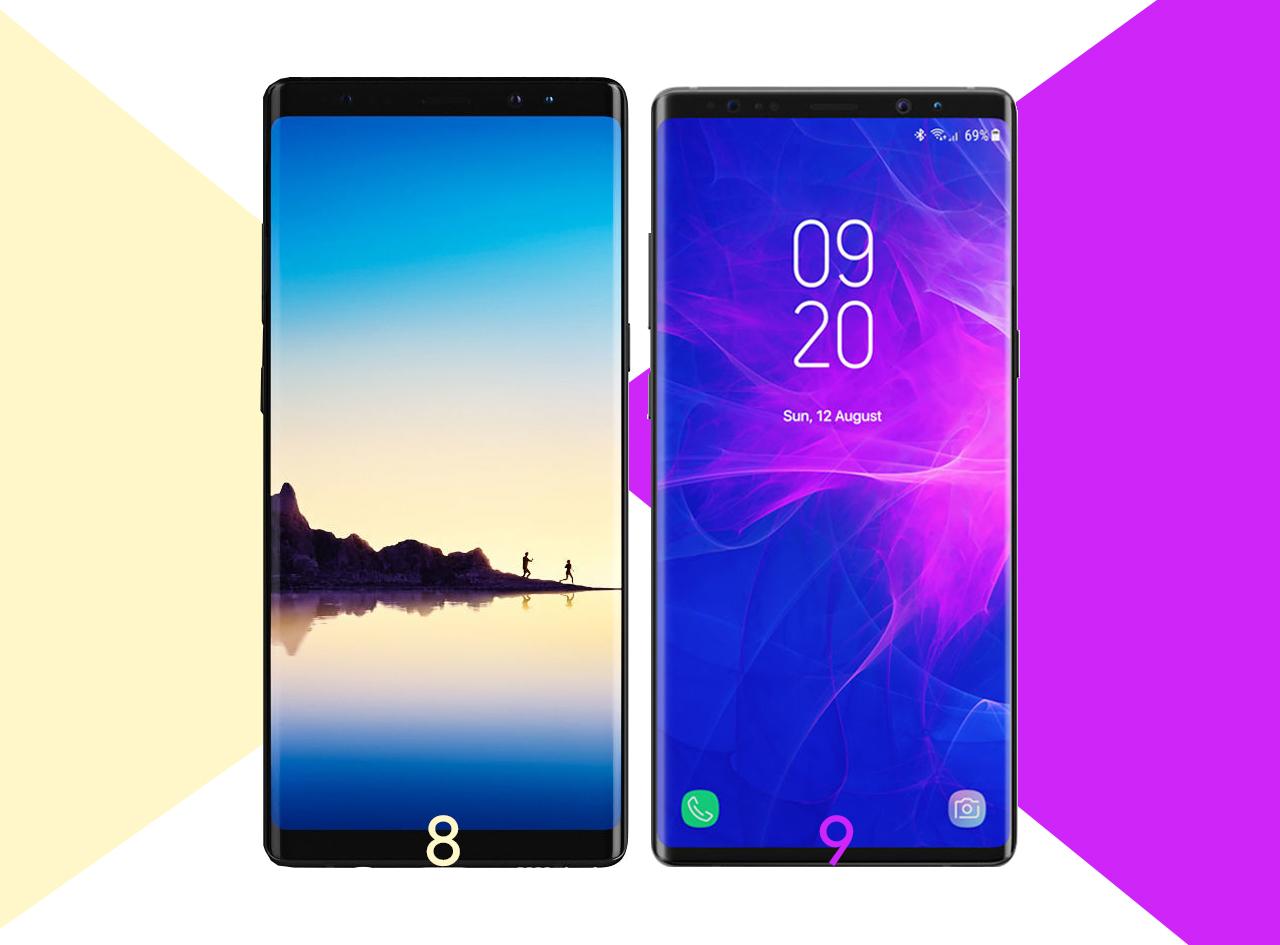 Notice the slight size difference between these devices. Sizes here are based on rumors, too, but based on that, we’ve got a device that’s the same width as in the 8 and the same thickness. The difference is in the height of the device.

Since this Galaxy Note 9 is shorter than its predecessor and its display is the same size, the bezels above and below are smaller by necessity. Because of this slight change, the display appears to be bigger – and it is, if by “bigger” you mean “covers a larger percentage of the front of the device.” 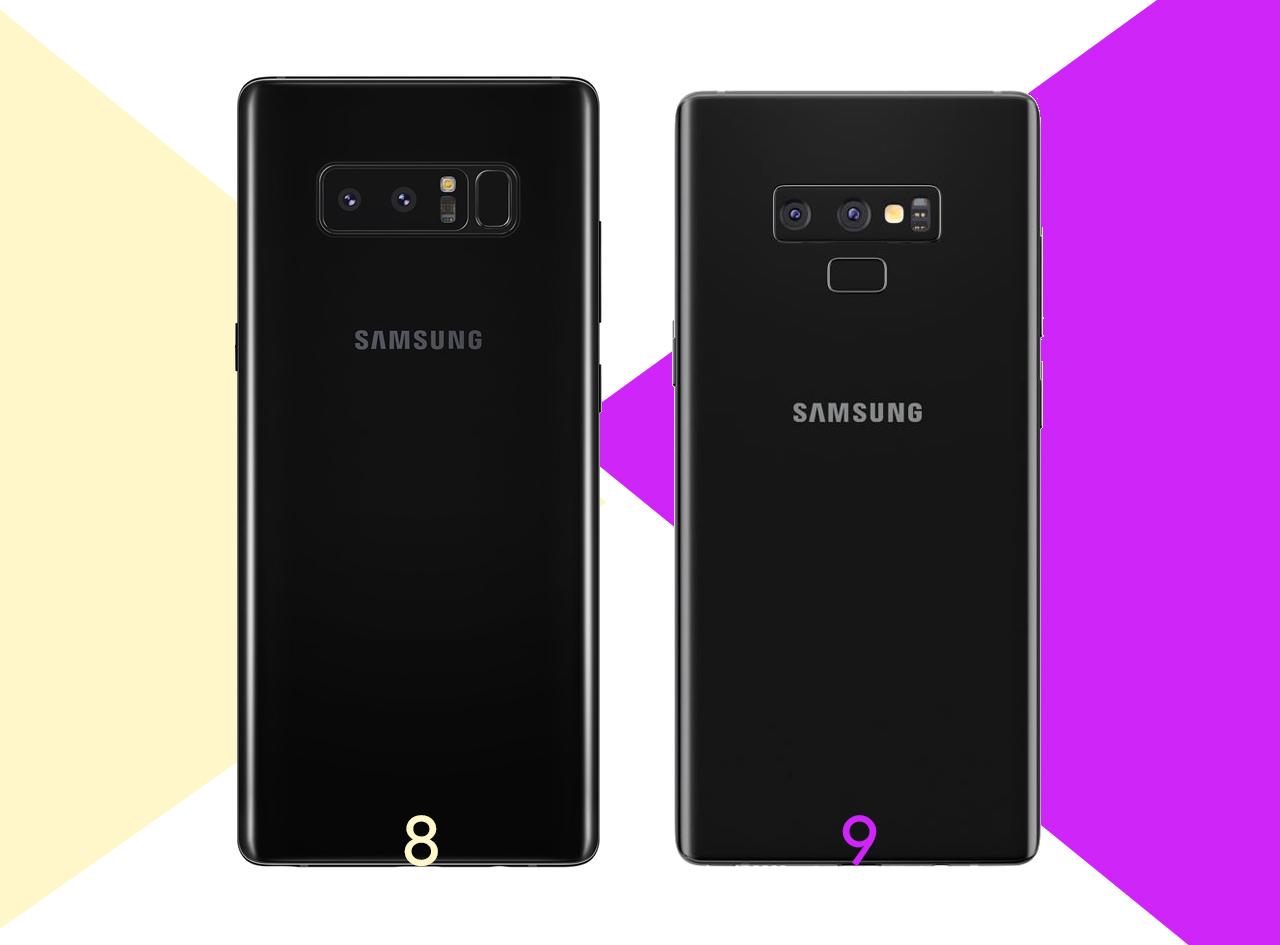 Size has always been a major selling point for the Galaxy Note series. The first device is normal sized by today’s standards, but when it was released, it was monstrous. The Galaxy Note 9 is set to be essentially the same size as the Galaxy S9 Plus. Putting a “Plus” in the title of a smartphone’s name today is like paying homage to the Note – the first of the mega-phones, or “phablets” if you prefer.

Cost as an Obsession Point

One major reason why there’s such an obsession with the Galaxy Note right this minute is the price point. It’s not that the device will cost anything different from its predecessor. It’ll probably cost $900+ USD. It’s that it’ll cost at least that much that makes some fans obsessively attack the refresh button on their tech news newsfeed. 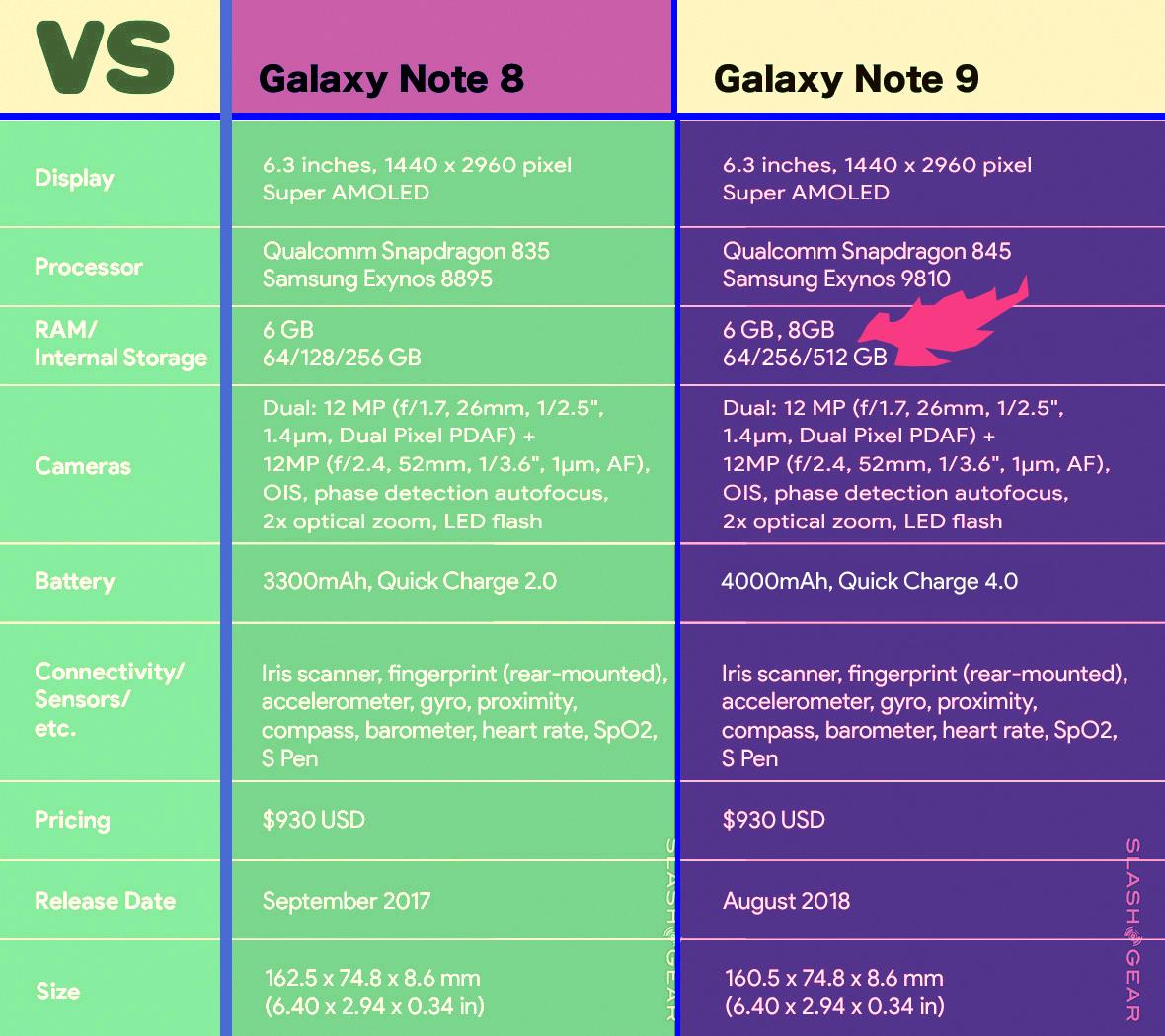 Take the headphone jack, for instance.* When I started using a device without a headphone jack, I needed to adjust how I played music and/or podcasts when I drove my car. That might not seem like a big change for some, but I do it every single day, multiple times a day. I plug my smartphone in to my vehicle at least hundreds of times, if not thousands of times, every year. If I’m going to pay nearly, or more than, a thousand dollars for a phone, I’m going to need to consider a change as significant as the absence of a headphone jack.

OF NOTE: This price/details point of interest isn’t necessarily any different from the obsession people have with such big-money devices as the iPhone X or the top-tier Galaxy S9. There’s also a money-based obsession with such phones as the OnePlus 6 or 6T, etc. It seems to affect the very highest-priced phones and those brands whose devices have prices that change a significant amount year-to-year – that’s primarily OnePlus, in this case.

The Galaxy Note 9 won’t be massively different from its predecessors – such is the way of things when it comes to a device as top-tier as this. Samsung’s big changes will almost certainly come next year with the Samsung Galaxy S10, a device which is rumored to roll with a nearly full-frontal-coverage display. The reason I look forward to the Galaxy Note 9 is refinement.

The Samsung Galaxy Note 7 was great – save for the whole battery combustion issue. The Galaxy Note 8 was a bit better, growing on the quality of the Galaxy S8. The Galaxy Note 9 is the highest quality iteration of this design generation. Come 2019, I estimate we’ll be entering a whole new world. As such, it’ll be cool to have the most high-quality version of a particular “age” of industrial design in this device.

There’s also the software – to such a small degree that I’m not even dedicating a full section to its importance. The software in any Samsung device is better with each new generation, and Samsung is currently in a place where they’re turning over a new leaf when it comes to artificial intelligence, smart assistance, and augmented reality tech. The Galaxy Note 9 will be, of course, the best place to experience all of these new software-based features – until, of course, the Galaxy S10 rolls up on us.

Have a peek at the timeline below and stick around as we approach liftoff. We’re expecting the Galaxy Note 9 to be revealed at an event in August, happening either on the 2nd or the 9th of the month. The event will likely take place primarily in New York, and it’ll be broadcast around the world. Release dates for the Samsung Galaxy Note 9 will likely come within the month thereafter.