The folks over at GSM Arena have acquired four documents containing the full specifications for Samsung’s Galaxy Note 3 Neo, a rumored so-called lite variety of the smartphone by the same (sans Neo) name. These internal documents confirm the existence of the handset, and in it we see details that lay out a handset akin to the previous Note generation, the Note 2.

According to the documents, the Galaxy Note 3 Neo features a 5.5-inch 720p-resolution AMOLED display, while under the hood there lies a 1.7GHz dual and a 1.3GHz quad-core processor, making it a hexa-core offering, eclipsing the Exynos, but not necessarily other high-end mobile processors out there. Beyond this, there’s an 8-megapixel camera and a 3100mAh battery.

The internal storage clocks in at 16GB accompanying 2GB of memory. There’s a micro SD expansion slot, as well, that supports capacities up to 64GB. Sensors are the typical APGS+GLONASS, a proximity sensor, accelerometer, barometer, compass, gyro, geo magnetic, thermometer, and humidity sensor, among other offerings.

Connectivity includes 802.11 a/b/g/n/ac and WiFi Direct, as well as Bluetooth 4.0 and USB 3.0, as well as the ever-handy NFC. There’s multi-window, according to the document, as well as air command, and magazine UX. Network connectivity is HSPA+42Mbps, and the software is listed as Android 4.3 Jelly Bean. 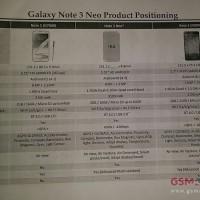 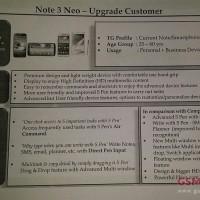 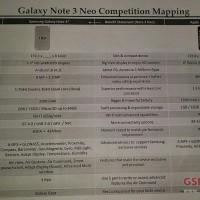 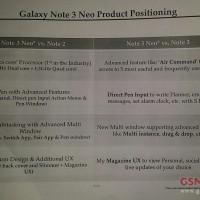