It’s quite encouraging that people are now pouring more attention into technologies that will empower those who otherwise cannot take advantage of all the fancy gadgets and software that this generation has at its disposal. After all, even people with disabilities might want to go online, use Facebook, or watch videos on YouTube. That is why efforts like Samsung’s EYECAN+, actually in its second generation already, are welcome additions to the slowly growing number of accessibility products that bring these people and technology closer together.

Samsung describes the EYECAN+ as an “eye mouse”. Since people with disabilities are usually incapable of moving a real mouse or even tap on touchscreens, sometimes their last resort are their eyes or their voices. There are actually many attempts at creating an eye-driven input for computers, though a good number of them are oriented more towards entertainment purposes. EYECAN+ was designed to give people almost complete control of a computer, truly substituting a regular mouse for one that is driven by your eyes alone.

EYECAN+ tracks eye movement and can be calibrated to a specific user’s eyes. It comes as a box that sits beneath the computer monitor so that the user won’t be constrained to a specific position. He or she can use EYECAN+ whether sitting down or lying down, as long as the monitor and the box are within sight. Selecting is done by focusing the eyes on a specific icon and the equivalent of a mouse click is an eye blink. EYECAN+ makes 18 commands available, each of which can be configured to a specific action or a general keyboard combination. The interface pops up as either a rectangular menu board or a radial menu. 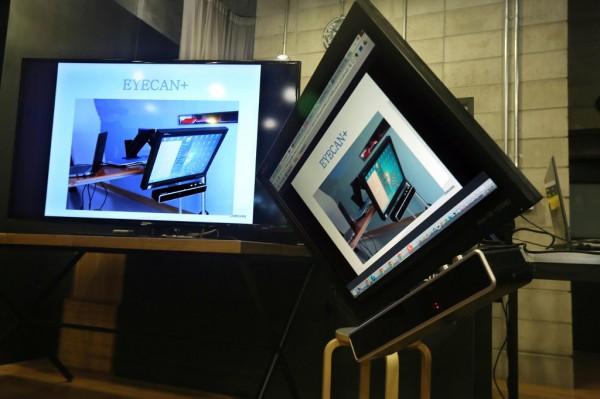 One interesting bit about EYECAN+ is that Samsung, though it develops the technology, won’t actually commercialize it. It will make some boxes to be donated to charity organizations. Instead, it will be open sourcing the design of EYECAN+ so that others who do wish to make one or even commercialize it will be able to do so.

The Samsung EYECAN+ is, of course, not the only game in town. Sesame is another such attempt that is seeking funding and verification on IndieGoGo at the moment. The difference is that Sesame is mostly a software implementation, utilizing a Nexus 5 as the hardware and employs both head tracking and voice commands to control the smartphone.