While Google remembers the Roswell UFO incident this week with a doodle like no other, we’d like to remind you of a document released by the FBI on the matter just a few years ago. This March 22nd, 1950 document was posted in April 2011 by the Federal Bureau of Investigation discussing three “so-called flying saucers”, each of them containing “three bodies of human shape but only three feet tall.” If you’ve not seen this document yet, it’s high time you did.

What you’ve got here is a letter that was indeed published by the FBI whose subject matter was, as the bureau notes, “a second- or third-hand claim that was never investigated.” While an FBI post in March of 2013 suggests that this file is the most popular PDF in the FBI Vault, said vault being made public due to the Freedom of Information Act of 1966. 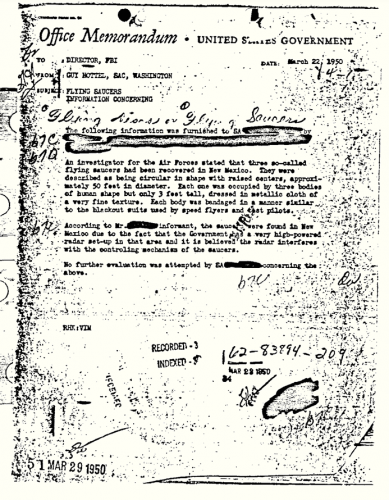 Above you’ll see the one-sheet itself – click for a larger version. Below is the information reproduced in text, of course.

“The following information was furnished to SA [REDACTED]

An investigator for the Air Force stated that three so-called flying saucers had been recovered in New Mexico. They were described as being circular in shape with raised centers, approximately 50 feet in diameter. Each one was occupied by three bodies of human shape but only 3 feet tall, dressed in metallic cloth of a very fine texture. Each body was bandaged in a manner similar to the blackout suits used by speed fliers and test pilots.

According to Mr _____ informant, the saucers were found in New Mexico due to the fact that the Government has a very high powered radar set-up in that area and it is believed the radar interferes with the controlling mechanics of the saucers.” 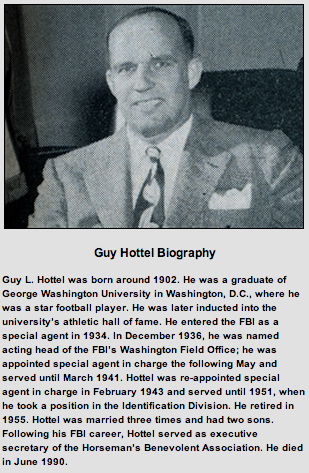 This file had existed for quite a while before the FBI Vault was launched as a web portal, and the group suggests that this piece of paper had been made public well before the webpage as well. While the file is not specifically dated by the author, there is a time stamp which suggests it was made three years after the original Roswell incident.

“The Hottel memo does not prove the existence of UFOs; it is simply a second- or third-hand claim that we never investigated. Some people believe the memo repeats a hoax that was circulating at that time, but the Bureau’s files have no information to verify that theory.

Sorry, no smoking gun on UFOs. The mystery remains…” – FBI

Please do take the time to have a peek at the actual original Hottel file to see for yourself the plain nature of it all. This certainly doesn’t prove or disprove the whole mess, but with files such as this still out there in the wild today, it reminds us that an incident as fantastic as an alien landing perpetuated in myth for this many years isn’t about to go away quietly!

BONUS: The FBI does, indeed, have an FBI Vault portal for “Roswell UFO”, if you’d like to dive in. Have at it!