A full decade in the making, tomorrow will likely be the first time we land on a comet. At around 4:30pm Central European time (about 10:30 EST stateside), the Philae lander is set to touch down on Comet 67P/Churyumov-Gerasimenko. Should it be successful, the robotic Philae is the first craft built by humans to ever land on a moving comet. Philae is set to detach from its Rosetta spaceship about six hours ahead of landing on Comet 67P.

Design of Rosetta began a long time ago, so this mission is actually decades in the making. After being conceived and designed in the 19990’s, Rosetta launched with Philae in 2004.

The duo have been in a pre-delivery orbit of the comet since Halloween. That orbital dance has yielded some pretty cool pics of the comet it hopes to land on, as well as some odoriferous emissions that only prove comets stink. 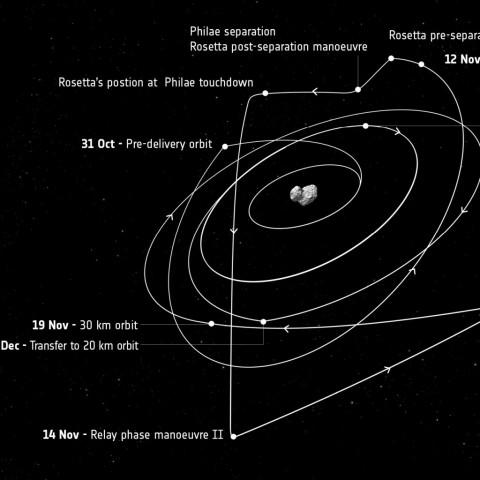 In studying the comet, scientists hope to learn more about the celestial bodies. What are they composed of? How do they react to the Sun’s radiant energy, or lack thereof? Philae is charged with drilling the comet for samples after it lands, but it will also snap more pics; this time, from the comet’s surface.

Those pics will also be a first — the first time pics have been snapped from the surface of a comet.

The final decision for landing will take place about nine hours ahead of the scheduled landing, but for now, all systems are “go”.