Over the years, Roccat has slowly carved out a name for themselves as a maker of quality gaming accessories. I’ve used a few of their mice and keyboards, and have generally been pleased with them. Today, I’m going to take a look at their Kova mouse, which I’ve been using for a little while.

The Kova is an ambidextrous mouse, which makes it one of the few mice that’s comfortable for lefties. Ambidextrous mice are slowly becoming more and more common, which is nice for those that need to use them. The mouse is grey with dark grey accents, which I feel gives it a sort of FPS military style look. I honestly like it a lot. It’s not a color scheme that I often see in mice.

Aside from the primary two mouse buttons, there are also two additional thumb buttons on each side. You’ll find the standard scroll wheel, along with a small button just below it. This is your DPS selector, which you’ll use to cycle through your various DPS settings, if that’s your sort of thing. 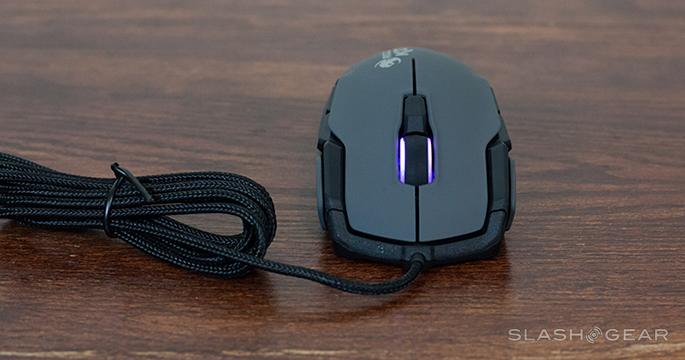 Finally, the Kova features a braided USB cable, and lighting around the scrollwheel, as well as a bar of light at the back of the mouse, toward the bottom.

As for the internals, you’ll find a 3500 DPI Pro-Optic R6 sensor. The Roccat software can double that, giving you a total of 7000 effective DPI.

The software that Roccat provides looks like it hasn’t changed a ton, since the last mice that I tested. They give you all of the options that you’d hope for. Changing sensitivity, DPI, and custom button mapping. Since you only have a single button for changing DPI, you have up to four different settings. These appear to be locked to 400, 800, 1600, and 3200. Personally, I like to be able to tweak these a little bit more, as my preferences tend to lie somewhere between these intervals.

In the button assignment area, you can customize every one of the buttons, including the actions of the scroll wheel, and your standard right and left buttons. What’s more, Roccat has a feature that they call “Easyshift” that sort of doubles the amount of available buttons. 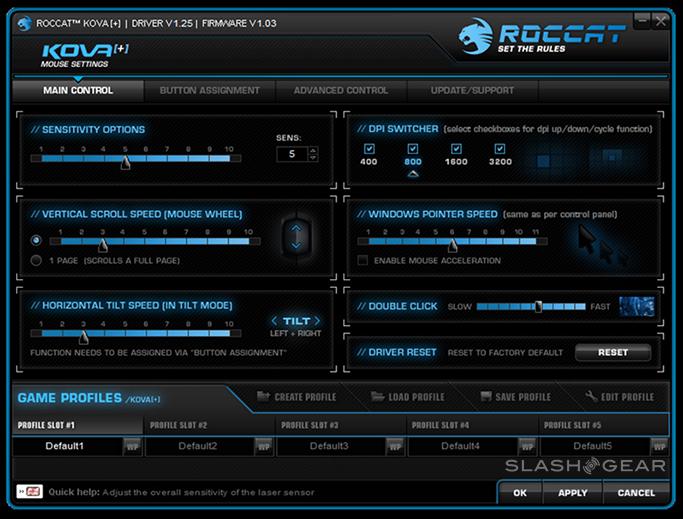 With Easyshift, you’ll assign one button to be the Easyshift button. This has to be one of the two rear thumb buttons (on the right or left side). When this button is used, the other buttons now act as their secondary functions. I don’t generally need this many buttons, but it’s nice for those that like to load up macros and such to all of their mouse buttons.

Finally, you can use the software to adjust the lighting on your mouse. There are only 7 colors to choose from, which is pretty limited these days. You can also set it to cycle through all of the colors, if you prefer a little variety in your life.

I found the Kova to be pretty comfortable, for an ambidextrous mouse. Every hand and every grip is different. I found that both claw grip and palm grip were comfortable, so if you tend to use either grip, you won’t go wrong here.
Since I’m right-handed, I use the left thumb buttons far more than the left ones. I like the placement of both sets. The left buttons were in the perfect spot, and the pressure required to activate them was a comfortable amount. I had to stretch just a bit to hit the right thumb buttons, but as I said, I don’t often use more than a couple extra ones on my mouse. However, by having to reach just a little to activate these, it ensured that I didn’t ever hit them by accident, which is very important to me. 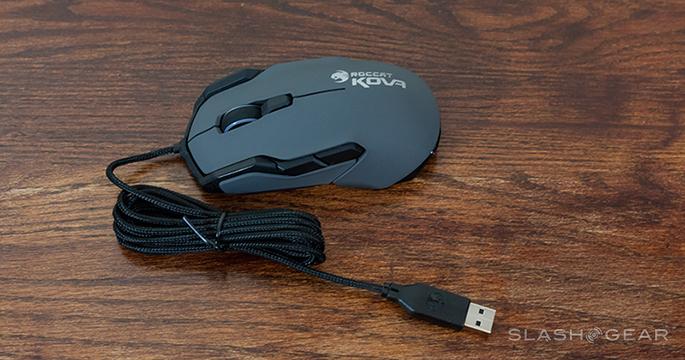 Overall, I was happy with the Roccat Kova. I was a little bothered by the lack of options in the software for the mouse, such as being restricted to the four preset DPI settings. The color options were also a bit limited, when you look at some of the other mice on the market. However, the mouse is solid, comfortable, and looks good. And for the $50 asking price, I can definitely recommend it, if you’re in the market for an ambidextrous mouse.