We knew the West Antarctic ice was melting, but it’s taken a school of robotic dolphins to figure out why, with researchers at Caltech using ocean gliders to explore the ocean eddies responsible. The six foot long robots take advantage of changes in buoyancy to soar through the water, rather than propellers, and swam the Southern Ocean off the coast of the Antarctic Peninsula for two months, diving to depths of around 1.2 miles before surfacing again to report their findings around temperature and salinity via radio links to the Caltech team.

Traditionally, such measurements would be taken by trailing instruments behind ships, the oceanographers say, or even looking to satellite data on patterns of water temperature.

However, the fact that the warm waters believed to be causing the melting is deep below the surface, and the difficulty in getting vessels to the locations of interest, forced the team to think up more unusual solutions.

The answer proved to be robotic vehicles that could remain in the water for extended periods, tracking the effects of temperature and oceanic currents over time. Battery-powered, they vary their own buoyancy by pumping fluid in and out of different compartments, either becoming more or less dense than the water around them.

Using wings on the sides, the changes in depth can also be translated into gliding to different locations.

Their findings have been unexpected. Underwater storms caused by swirling currents are increasing the amount of heat being delivered to the ice shelves, but had been overlooked in the past because they can be temperamental and thus not necessarily occur while more periodic observations are underway.

“[U]nless you understand how the temperature of currents is changing from day to day — information we can actually collect with the gliders,” assistant professor of environmental science and engineering and study lead author Andrew Thompson says, “then you can’t understand what the long-term heat transport is.” 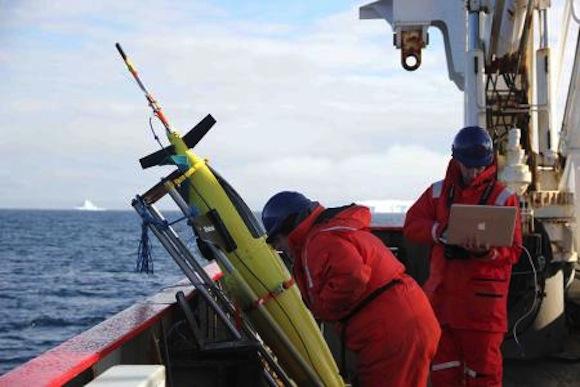 The school’s work isn’t over yet, however. Next up, Thompson suggests, is pairing the robo-dolphins with a surface robot, known as a Waveglider. Together, they’ll be able to compare rough oceanic activity at the Drake Passage – between the southern tip of South America and Antarctica – with activity at the surface plus wind speed and direction.

That will open up new data on the exchange of carbon dioxide between the atmosphere and the ocean, and hopefully cast further light on climate change.