RoboFly is a robot insect powered by a laser

A group of researchers is working on an insect-sized flying robot that they believe could help with all sorts of tasks from finding gas leaks to surveying crops. Rather than having propellers that push them like an airplane or rotors like a helicopter, these tiny robots fly around by flapping wings like an insect. The small size of the robot flying machines makes them cheaper to produce and able to slip into tight spots that larger drones couldn’t access.

The problem with most tiny robotic insects is that they require a tether to get the power needed to operate. A team of engineers from the University of Washington has developed a new tiny robot that needs no cord and has a brain of sorts embedded called RoboFly. 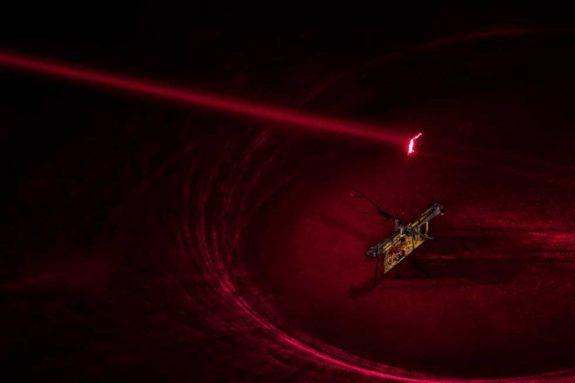 RoboFly is a bit heavier than a toothpick and gets power from a laser beam shined at an onboard circuit. That circuit can convert the laser energy into electricity to operate the wings and allow the robot to fly. The biggest challenge in the engineering of RoboFly was to get the power needed for wing flapping. It takes significant energy to power and control the wings. The team says the laser was the most efficient way to do that.

The catch is that the laser can’t provide enough voltage to move the wings. Fixing that required the team to design a circuit that boosts the energy captured from the laser from the seven volts captured to the 240 volts needed for flight. A tiny microcontroller on the same circuit controls the wings.

That controller brain sends voltage in waves to mimic the flutter of an insect’s wings and get RoboFly into the air. RoboFly is currently able to take off and land. It loses power once it flies out of the path of the laser and lands. The team does hope to devise a way to steer and hover the robot in the future.