A self-balancing unicycle robot could be your next home or office security guard, if startup Roambotics has its way, trundling from room to room and wirelessly pinging out alerts to users’ smartphones and tablets. Dubbed Jr., the wheel-shaped robot carries four cameras for near-360 degree video and still images, as well as microphones, WiFi, Bluetooth, and optional cellular connectivity.

Through those wireless pipes, Jr. will be able to push live video and on-demand recordings to the companion Roambotics app, with footage backed up in the company’s cloud.

The idea is that, rather than remotely control the robot such as with iRobot’s AVA 500 telepresence ‘bot, Jr. will learn its environment and autonomously decide where to patrol. Owners will be able to pick the robot up using the integrated carry handle to move it to different locations. 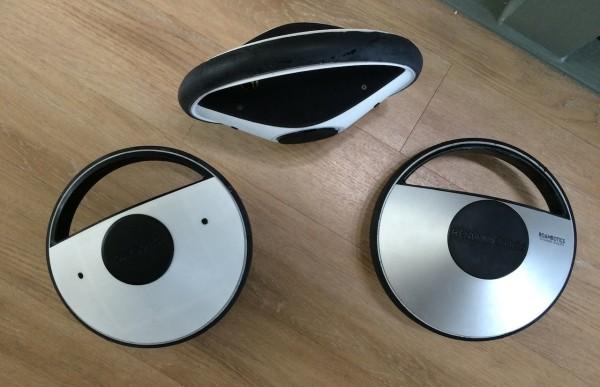 While security is seen as the obvious initial use for Jr., Roambotics has broader plans for the future. Telepresence is one, but the self-directed robot could also be used to spontaneously document social gatherings, or to keep an eye on sick or elderly relatives.

There’s also the possibility of using Jr. as a 3D mapping system, effectively turning it into a Google Project Tango camera on wheels.

Laying Jr. down on its side automatically powers it off (which also presumably means that kicking the robot over would in effect disable your security guard, though hopefully not before it captured some video of the whole thing). Recharging is done inductively, and the whole thing is powered by NVIDIA’s Tegra 4.

Roambotics says that its software platform will include open APIs for developers, and what it’s dubbed a “Skill” store which will allow third-party programmers to release new capabilities for Jr.

No word at this stage when the robot might launch, nor what it could cost.