Rivian has been busy for several months building pre-production vehicles at its production facility. The big push for the electric vehicle startup is to get its first vehicles into the hands of customers. Rivian CEO RJ Scaringe tweeted yesterday that the first customer vehicle rolled off the assembly line after months of working on pre-production vehicles.

In his tweet, he shared several images of a celebration held at the production facility with what appears to be virtually every Rivian employee in attendance. In some of the photos, we can see a long line of production vehicles behind that first customer ride there also complete and rolling off the assembly line. With the production of the vehicles complete, the assumption is they will be heading to customers very soon.

However, Rivian has made no comments on exactly when the vehicles will be delivered. Rivian began production with its R1T electric pickup, but it is also building the R1S electric SUV. Earlier this month, EPA estimated driving ranges for the Launch Editions of the pickup and SUV utilizing the Large Pack battery were published. 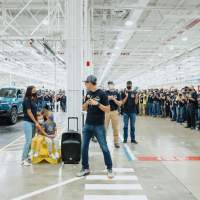 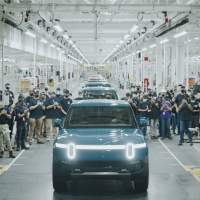 The R1T with a big battery is officially EPA rated at 314 miles per charge. That works out to 70 MPGe combined. Rivian’s R1S SUV gets slightly better range estimates at 316 miles but has a rating of 69 MPGe combined. It’s worth noting that the EPA’s numbers matched what Rivian had been promising.

After months of building pre-production vehicles, this morning our first customer vehicle drove off our production line in Normal!  Our team's collective efforts have made this moment possible. Can't wait to get these into the hands of our customers! pic.twitter.com/8ZidwTaXRI

While the company has been busy with pre-production vehicles and now customer vehicles, it’s also been talking about its IPO. In late August, Rivian revealed the first details of its planned IPO. Ford also confirmed that it intends to co-develop a vehicle with Rivian. Ford is an investor in the electric car company.