Ring wearable device puts the power right at your fingertip

Who says that a wearable need to be something geeky like an eyeglass or big like a watch? This Ring input device shows that something so small can just be as useful and perhaps even be more expressive.

Ring: Shortcut Everything puts the ability to control your device or do almost anything at your fingertip, almost literally. As the name, which is both rather generic but also indicative of what is, Ring is a device that you wear on your finger, exactly like a ring, except a very large one. Once worn and paired with any device with some smarts, you can do almost anything. The limit is the amount of gestures you can think of and, more importantly, remember.

You might remember a similar ring concept we came across before. While both Ring and Fin sport overgrown ring designs, they are different in the technologies they use and, consequently, the things you can do with it. Ultimately, Fin’s abilities limit it to your palms and the number of segments on your fingers. While that might be more than enough for regular users, power users, who might be the primary audience of these types of accessories, will probably be left wanting more.

Ring uses a single finger, your forefinger to be exact, like a writing device or, if you prefer, a wand. Logbar Inc., the startup behind Ring, developed its own ultra-small finger gesture recognition technology from scratch. This allows the Ring to detect not just large sweeping gestures with the hand but even minuscule ones made by the finger alone. Ring comes with its own preset gesture for launching and controlling apps. It even comes with its own Ring alphabet to let you write your messages in the air. The companion smartphone app, however, will let users use their own gestures and even create new ones for things like turning on a lamp shade. 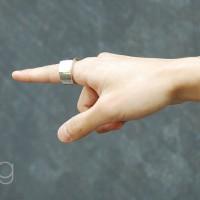 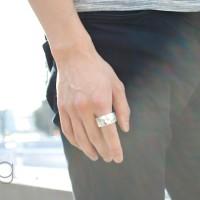 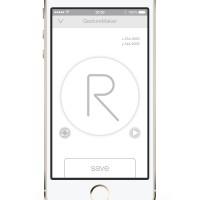 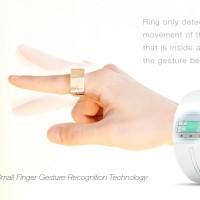 Ring is, however, far from perfect. Probably most obvious is the fact that it is not a small, inconspicuous ring. But if you’re going to be using air signs in public, how the ring looks might be the least of your worries. The Ring could also leave your finger a wee bit strained with prolonged use, though it could possibly give our overused thumbs a bit of a break as well.

This Ring of input power isn’t yet available commercially. It currently exists as a Kickstarter campaign where a $185 pledge will get you one Ring when it gets shipped in July this year. The funds will be used to mass produce the devices and no mention was made if it will be offered on retail in the future.