Motorola have dropped out of the top five worldwide mobile phone manufacturers ranking, according to analysts IDC, with RIM taking their place.  The move – which pegs Nokia in first place, followed by Samsung in second, LG in third and RIM sharing fourth place with Sony Ericsson – is being described as a sign of growing smartphone demand.  Motorola, who have been a member of the top five since IDC began tracking worldwide quarterly figures in 2004, shipped 8.5m handsets in the three month period at the start of 2010; in contrast, RIM shipped 10.6m.

Western Europe has shown a strong pick-up in both smartphones and featurephones, while interest in the former was high in both the US and Canada.  However, both countries saw decline, with only a renewed interest in messaging-centric featurephones keeping things buoyant.  Asia/Pacific, meanwhile, saw strong growth, predominantly due to entry-level smartphone sales in the Chinese market.

However, as for the manufacturers themselves, it’s only when you look at the market share figures themselves that you begin to see the real movement.  Nokia are down from 38.4-percent to 36.6-percent year-on-year, despite unit shipments being up by more than 14m, while Samsung have increased their market share to 21.8-percent and shipped almost 50-percent more devices than a year ago. 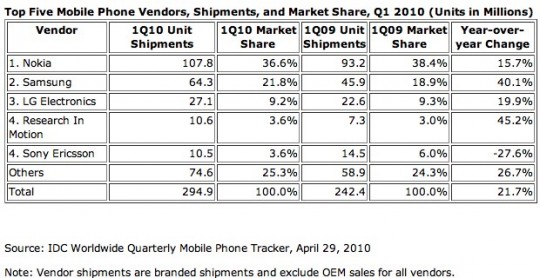