The BlackBerry Bold features a 480×320 pixel resolution, 65,000-color display, a new design that looks much more elegant than previous BlackBerry models. The Bold sports curvier edges and a silver trim complementing the black casing. Flip it over, and you’ll find that RIM has added a leatherette texture to the back. The days of cheap and slippery plastic are gone. RIM intends to sell replaceable backplates in different colors, including blue, gray and red. The Bold weighs 4.7 ounces and measures 4.5-inches tall by 2.6-inches wide and only 0.5 inches deep. The blackberry Bold also has a new QWERTY keyboard that’s a more modernized version of the Curve. People who have used the new layout have commented that it’s pretty easy to use thanks to its “large-ish” buttons with some spacing between the keys. 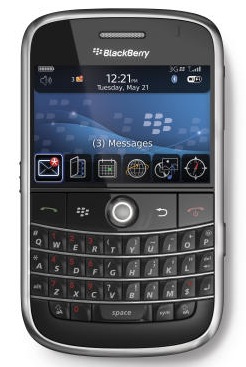 For web junkies, the web browser has been improved with options to view pages in a full desktop HTML style or a mobile version. The trackball acts more like a mouse cursor and zoom in/out; allowing for moving around the screen easier. The 2.0 megapixel camera isn’t much to brag about but at least it lets you zoom up to 5x and record videos. The media player support numerous audio and video formats, including MP3, WMA, AAC, DivX4, and WMV3 files, and the phone is equipped with a 3.5mm headphone jack. The Bold has now got some pretty powerful speakers. Wahoo.

The Bold isn’t available because it’s still going through carrier certification, and yes, base on the power of deduction, the Bold will launch on AT&T network. If you’re salivating over the Bold, expect to shell out between $300 to $400. It should launch worldwide this summer.