Rhapsody comes to Ford and Lincoln vehicles through SYNC AppLink

While we’ve got all sorts of cool little gadgets to check out here at CES, a number of car manufacturers are also showing off whats new with their vehicles. One of these car manufacturers is Ford, which today announced that Rhapsody will soon be available in Ford and Lincoln vehicles equipped with SYNC AppLink. This is the first time Rhapsody has been fully integrated with vehicles, so this is certainly pretty big for the popular music streaming service.

SYNC AppLink has a number of benefits for the Rhapsody user who wants to use the streaming service in the car. While it was definitely possible to use Rhapsody in your car before this integration with Ford and Lincoln vehicles, AppLink will let you sync the app to your car, thus allowing you to control the app using the SYNC touch controls or the radio buttons on your steering wheel. This, in turns, lets you keep your eyes on the road, which means that you get the best of both worlds – you get to listen to Rhapsody while at the same time keeping the chances of a potentially nasty crash low.

Setup seems pretty easy too, with Rhapsody’s mobile app connecting to AppLink via Bluetooth as soon as its started up. This partnership will probably be a big win for Rhapsody, as the company recently polled its users to find out what they did for entertainment while driving in the car. 40% of them said they stream Rhapsody while only 13% listen to the radio, so if Rhapsody can make the streaming process easier for Ford and Lincoln owners, we might see that number rise. 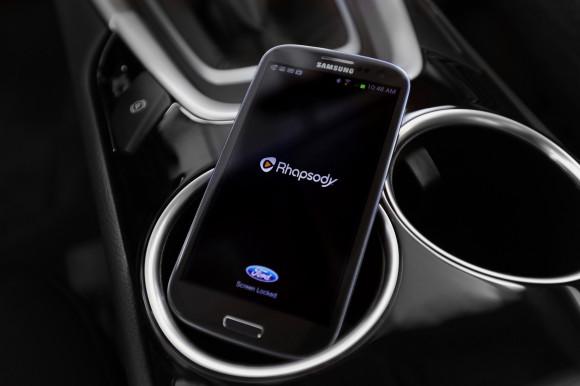 In addition, Rhapsody has found that the number of users accessing the service through mobile devices is growing year after year, so this new team up with Ford could help that percentage grow as well. Given the fact that SYNC AppLink is available on 1 million different for vehicles (including the 2013 Fiesta, Mustang, Expedition, and F-150, among others), there should be a fair number of Ford users who can take advantage of this new functionality. Be sure to check out our CES portal for more from the show here in Las Vegas!