Resistive RAM ready to take on the big guys soon

Despite what seems to be fast-paced progress from the outside, much of the tech world moves at a rather slow pace. Take for example data storage technologies. We are, to some extent, getting more storage, sometimes in smaller spaces, but we’re basically just lumping more of the same thing. Eventually, the laws of physics will take over and we can no longer expand. Resistive RAM, or ReRAM or RRAM, wants to take take things to the next level by replacing the age-old NAND tech by something completely different.

NAND technology is based on storing electrons inside cells. While that has worked so far, and will continue to work for the foreseeable future, its progresses will eventually be impeded by limitations in physics. As such, improvements in storage speed and capacity are sometimes usually focused on the controller or interface and not on the NAND technology itself.

Crossbar’s ReRAM technology creates resistance in circuits to store data instead. There are several advertised benefits to this. For one, it consumes less power, 64 picojoules per cell, a fraction compared to NAND’s usual 1360 number. It is claimed to also be faster than NAND, because, for one, it doesn’t require erasing existing data before being reprogrammed. These benefits also lead to a simpler microcontroller compared to those needed by regular NAND storage, which further cuts back on complexity and cost. 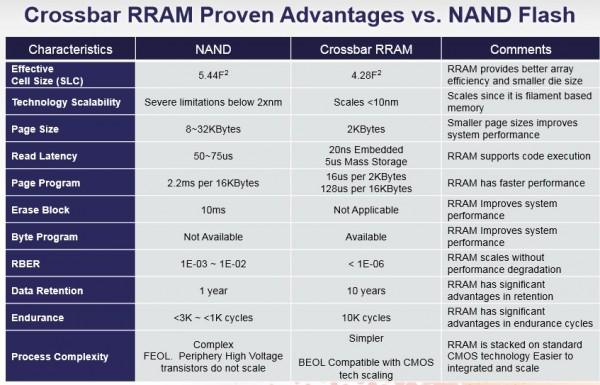 Crossbar claims that it is ready to commercialize the design of ReRAM, already licensing it to SoC developers, with samples expected to arrive next year. That said, even if it does hit that milestone, it might take some time before we even see actual commercial devices bearing this new technology. And it isn’t for the lack of desire for better storage.

In the end, the biggest impediment to ReRAM won’t be technical but economical. Major tech companies have already invested millions in NAND technology and they would be very wary of throwing those out of the water by embracing something still untested in the market. So in the meantime, these companies will continue to invest in more conservative improvements to NAND, like Samsung’s 3D V-NAND foray.