It isn’t unusual to find paintings hidden beneath paintings, and the latest amongst these discoveries is a new Picasso work of an unknown melancholy man. The image was discovered using infrared technologies, and while research isn’t complete, it has finally been revealed to the public.

The hidden painting was first spotted back in the 1990s, confirming a long-held suspicion that a work may exist under Picasso’s The Blue Room. Advances in infrared technology allowed a clearer image to be discerned back in 2008, with research continuing since them to slowly piece together an even clearer image of the unknown painting. 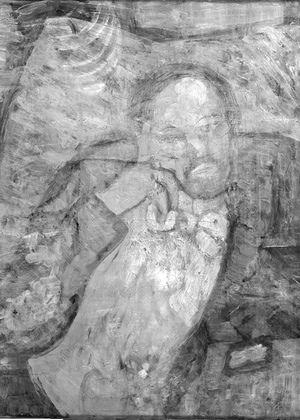 The painting was revealed for the first time last week, and at this point it is still in black-and-white. In it, we see a man who hasn’t yet been identified with his face resting on his hand — a self-portrait, however, has been ruled out.

Research will continue, and others have been brought in to scan the image using multi-spectral technologies alongside x-ray fluorescence intensity mapping. Using this, the researchers hope to determine what colors were used on the discovered painting, giving a more realistic representation of it.