Researchers devise way to control drones with your body

Normally when people control drones they do it using handheld controllers of some sort rather like a gamepad from a console. In the future, controlling a drone may be done with no joysticks, but with movements of your body. Researchers from EPFL have created a more intuitive way to control a drone using your body.

Researchers are working now to implement the body-machine-interface technology into drones used for search and rescue. The team says that the tech would allow pilots to fly a drone using body movements leaving their head free to look around. Using the new method of control the scientists say that piloting a drone is easier to learn and requires less mental focus from the user. 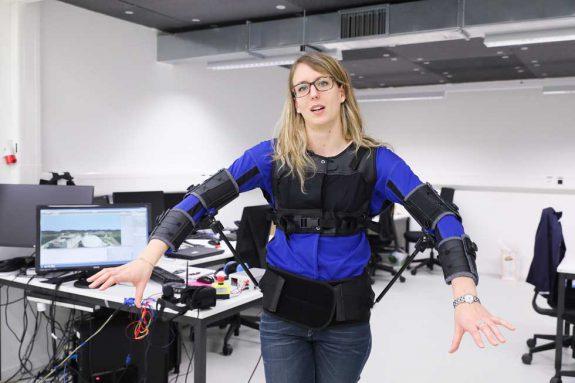 Less mental focus for flying the drone allows the pilot to use that focus on more important aspects of the search and rescue operation. Using your torso promises to give the pilot the feeling of flying and makes it easier to precisely control distant objects. Researchers started the project by monitoring the body movements of 17 individuals using 19 infrared markers placed on the upper body. The sensors also monitored muscular activity.

Each of the participants then plotted the virtual drone through simulated landscaped and passed the data to the pilot using virtual reality goggles. This allows for control patterns to be gathered and established torso-related strategies for piloting drones. The team found that only four markers located on the torso were needed to pilot the drone.

Those markers were used to pilot a real drone through an obstacle course. The next stage is to integrate the things learned and technology needed for piloting drones in this manner into a wearable control device. The team has so far developed a wearable that has no external motion detectors dubbed Fly Jacket. The weird arm supports are meant to help reduce fatigue.