Supposing you’ve not yet purchased either Borderlands 2 or Borderlands: The Pre-Sequel, the team at Gearbox Software and 2K have ushered in a box set made specifically for the Xbox One and PlayStation 4. There are two different editions popping up today (2 sets and two versions of each set, one for PS4, the other for Xbox One). The first is just “The Handsome Collection” – this includes both games and a whole lot of add-ons released since Borderlands 2 was first revealed. There’s also a remote control Claptrap toy to be had.

The double-pack disk will be on sale on the 24th of March, 2015 in North America, then the 27th internationally. “The Handsome Collection” might very well be the best reason to own more than one controller, too – you’ll get four-player local split screen for multiplayer action right out of the box.

The Handsome Collection will be available for $59.99 USD when its released in March. 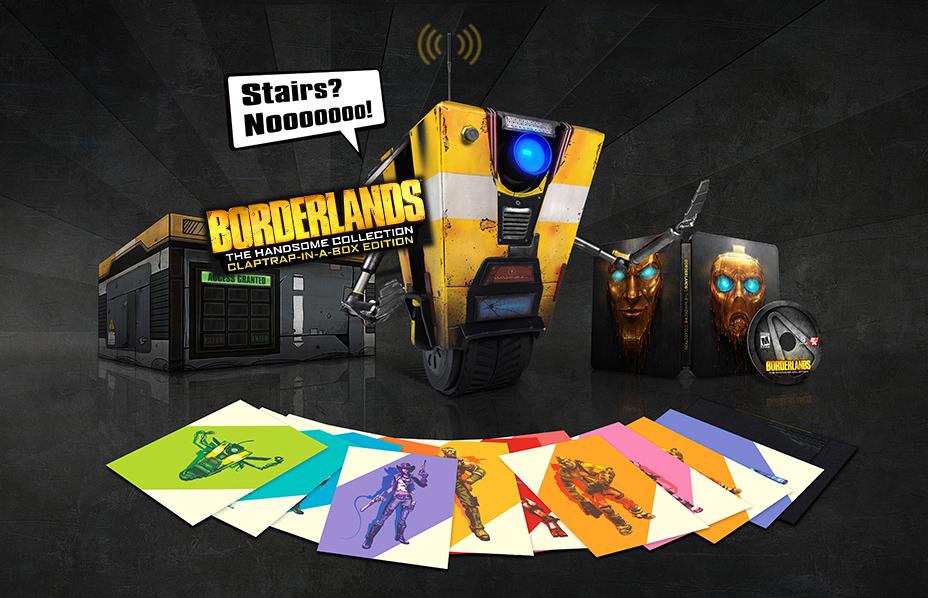 And it includes a remote-control Claptrap robot.

This robot works with PCB Gyro technology allowing him to balance on one wheel, just like he does in the game. He does a whole lot of cool stuff, in fact:

You can see what Claptrap sees in your mobile app remotely. It’s like a magical robot fantasy! You also get the whole set in a big collectible steel case.

Of course this robot magic comes at a price. You’ll be dropping a cool $399 USD at select retailers – this edition will be available in a Limited Edition of 5,000 units in late March.