This week Reddit changed the mind of EA on a game they were just about to release called Star Wars: Battlefront II. This game was looking amazing at first, then the public turned sour at EA’s reveal of in-game transactions. After days of bad press from game and tech blogs and a massive front-page-fiasco on Reddit, EA “heard you loud and clear.”

What about these GIFs and Memes, you say – why would a meme-master make a meme with any regard to this game? Because memes and GIFs are the backbone of any social media movement – and with Star Wars, everyone can be involved. Because seeing the comedy in the situation gives fuel to the people that’d otherwise fall to the whims of EA and an increasingly greedy gaming market – that’s why.

They didn’t fall, and they didn’t give up. Above you’ll see Reddit user Oly-SF-Redwood’s reaction to the situation. This user included the title: “When nerds cause enough of an uproar to impact profits of a AAA company.” Once it was revealed that Battlefront II included cash-for-heroes in the game, users got mad.

Once it was calculated that, outside of cash, players would have to play a MASSIVE amount to attain a hero in the game, users got especially mad. The total was somewhere around 4,528 hours of gameplay or $2,100 cash to unlock everything. That’s one large amount of work, either way.

It was at that point that the pics and the GIFs really started rolling in. Perhaps the most amazing and entirely accurate portrayal of the situation in-game at this point came from Technohawk. This is one massive GIF, so get your popcorn ready. UPDATE: Turned to video for quicker load-time.

The problem was microtransactions – and the inclusion of in-game purchases (loot crates and heroes and such) in a game that already cost cash up front. Allow Qui-Gon to explain what microtransactions are. This image was put together by MandalorianMemes. It includes a shot right to EAs gut on the matter – not that they’ll see it that way, necessarily. 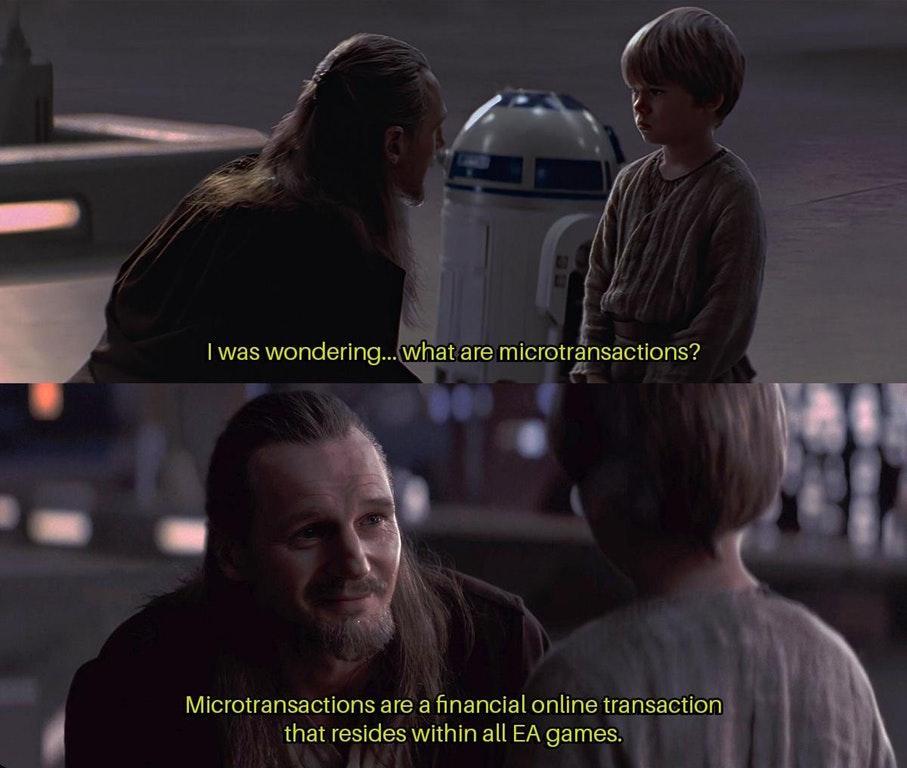 The Jedi Mind Trick was strong with this one. This image ended up being pretty good at foretelling the future. This constructed image was made by roguesquadpod. 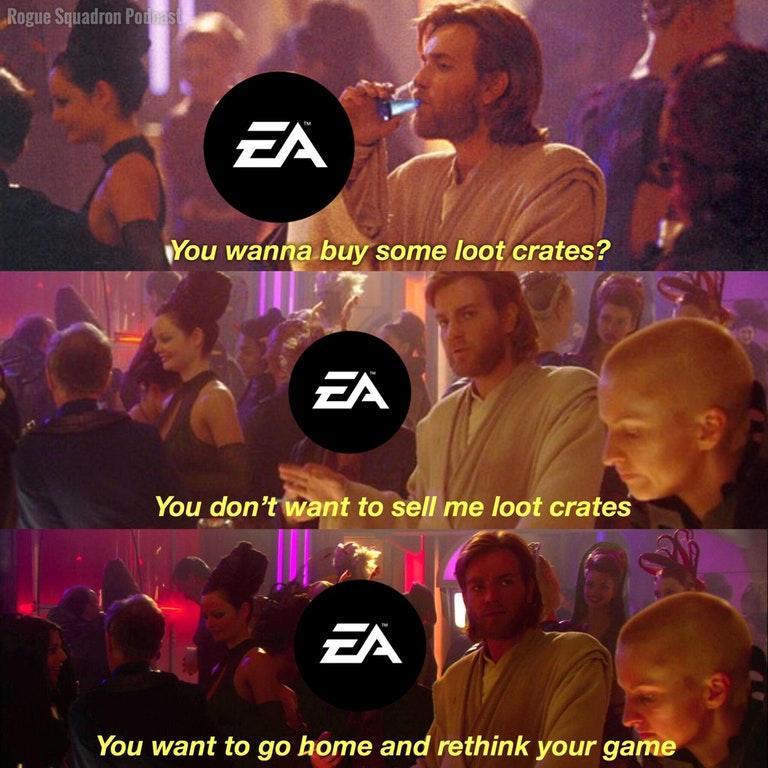 Reddit’s war with EA over Battlefront also included an AMA session with the creators of the game. It did not go as they’d planned. One response from the official EA Community Team on Reddit scored a new world record: most downvotes for any comment in any thread on Reddit since the beginning of time.

The Pride and Accomplishment memes reared up at this point. Below you’ll see one from CardinalVader. This is Krennic, once again, showing what it would have been like to be some of the first people to spend real cash in the game, when later microtransactions were done away with.

As more news outlets caught on to the situation, memes with reference to said worry on behalf of EA appeared. This one comes from ilovelindz. 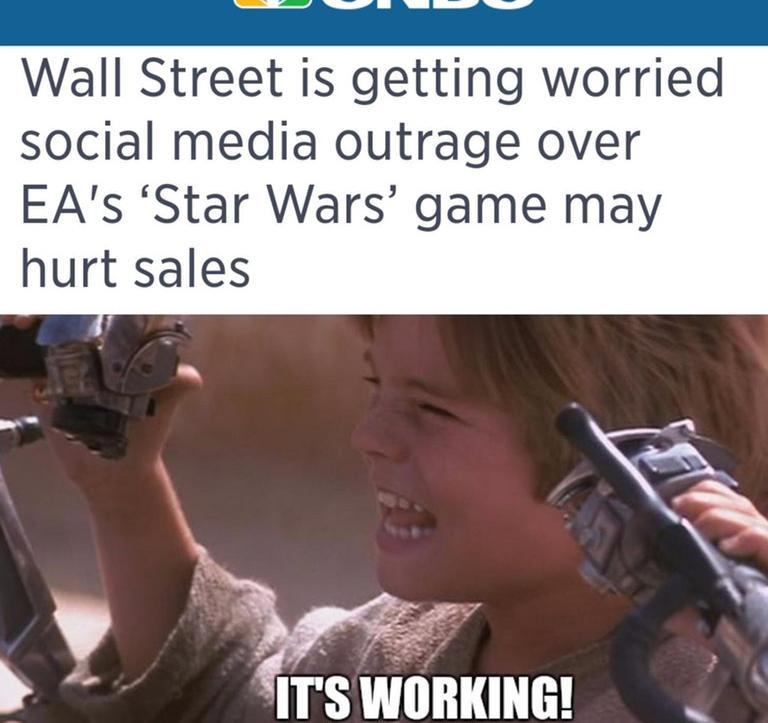 Below you’ll see an interpretation of the situation as meme’d by user PhilEklund. There you’ll also find the next-to last message – a message from DICE – as it appears to have happened this week. 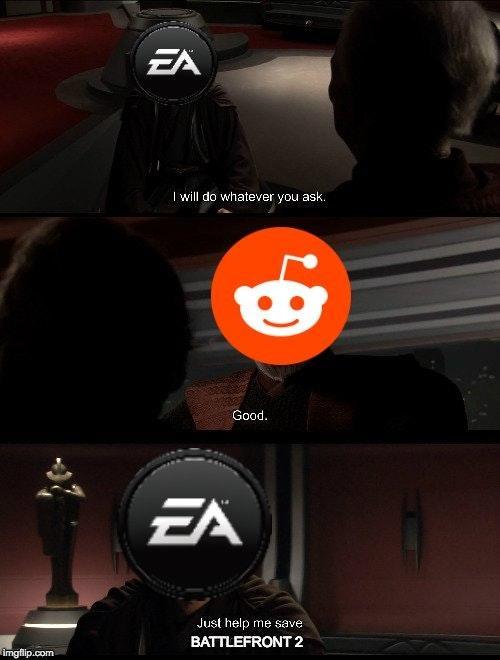 EA’s announcement that they’d be disabling microtransactions with the possibility of their return, users again reacted with Director Krennic from Rogue One. This one comes from ArmyAndStuff. 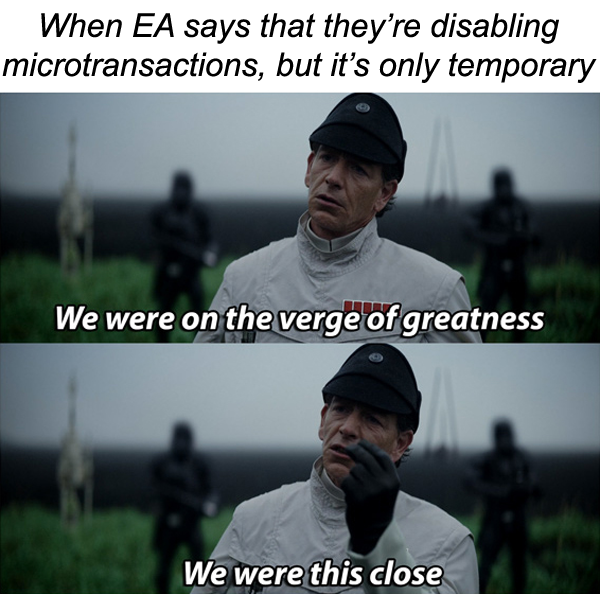 Users on Reddit and gamers across the globe seemed to take the next-to-latest update from DICE and EA with a similar attitude. This is Obi-Wan in The Phantom Menace, made by SEAN77177. This is Star Wars, after all – it might be a trap! 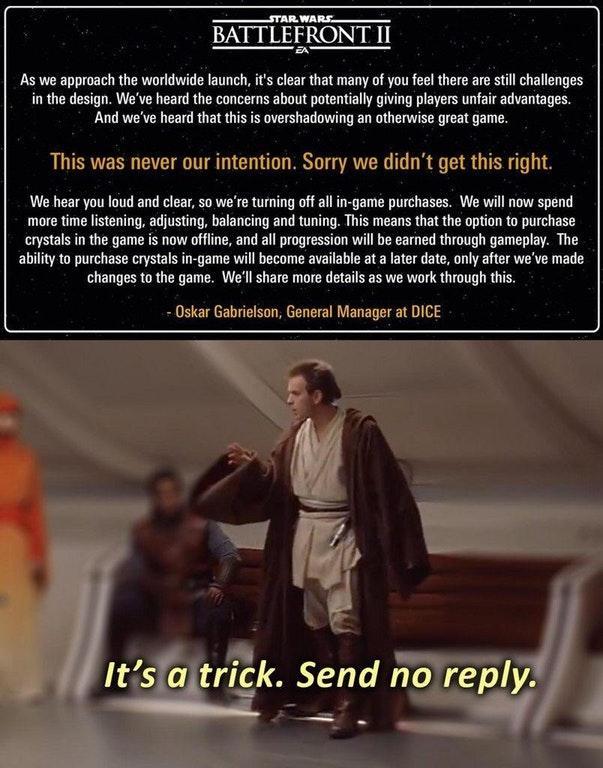 We’re now at a place where we’ve got an uneasy truce between the makers/sellers and the buyers/gamers. It’s not perfect, but it’s certainly better than the alternative.

And so it was that Reddit changed the minds of DICE, EA, and whoever else was responsible for in-game transactions. The masses – the consumers – the gamers made the change happen. Let this be a lesson to all those involved!