In case you missed the initial announcement, Reddit introduced an alpha test for a News tab in its iOS app about a month ago. The feature provides a dedicated in-app area where news content on a variety of categories can be accessed directly. This week, the company revealed that it is bringing that new tab to all of its iOS users, but not everyone is happy about it.

A few weeks ago, Reddit launched an alpha version of the News tab in its iOS app as an initial test with some users. That evidently went well and the company is back with a new announcement: the testing has moved into beta. Under this beta, Reddit is releasing the News tab to all of its iOS app users. 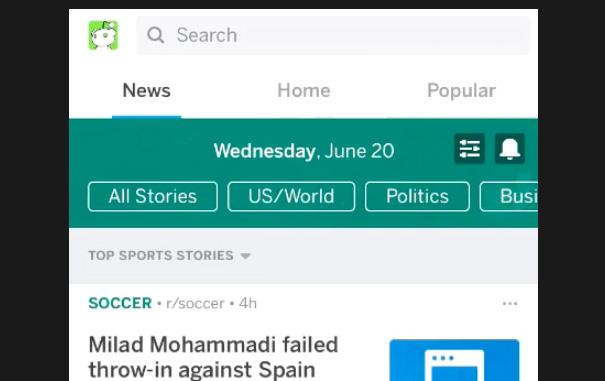 The News tab is exclusive to Reddit’s own mobile app and isn’t yet available in Android. With it, users can choose which news topics they’re interested in, then scroll through those topics (“World,” “US,” etc) at the top of the app. Tapping one shows the trending stories in that category.

The content is surfaced by the subreddits where they’re posted. The company plans to expand the feature for desktop later this summer, but it hasn’t revealed when it’ll be offered to Android users. Despite the convenience of aggregation, not all users are happy with the change.

There are currently concerns over which subreddits get included in the news category and whether there’s enough diversity between them. Some users worry the News tab could lead to a sort of echo chamber, though Reddit says it plans to expand the number of subs it includes later on this year. Whether it will be made available in third-party Reddit apps isn’t clear.