The Razer Phone is apparently rolling with Android 8.1 Oreo in testing – so says the benchmark system Geekbench. But before the device is released to the public, it might well be bumped up to Android 9 Pie. That’s been known to happen between Geekbench appearances and final versions of phones in the past. That is, bumps to new software before final in-store availability.

Razer Phone 2 has a motherboard whose code-name is Cheryl2, which is entirely giggle-worthy, but tells us little about the final product – other than it’s kept its similar name (Razer Phone 1 was Cheryl). Memory onboard appears at 7667 MB, which essentially means it’s going to be 8GB RAM on the spec sheet. This fits perfectly with what we’re seeing the System-on-Chip’s processor as: the SDM845.

This benchmark result shows a Qualcomm processor with “ARM implementer 81 architecture 8 variant 6 part 2050 revision 13”. With 8GB of RAM and other details matching those of similar devices (including the base frequency of 1.77 GHz), we can surmise that this is the Qualcomm Snapdragon 845. The name Cheryl2 on the motherboard spec likely means Razer’s done some custom work to make their phone work in a more unique way – perhaps for some more 120Hz (or more) display action! 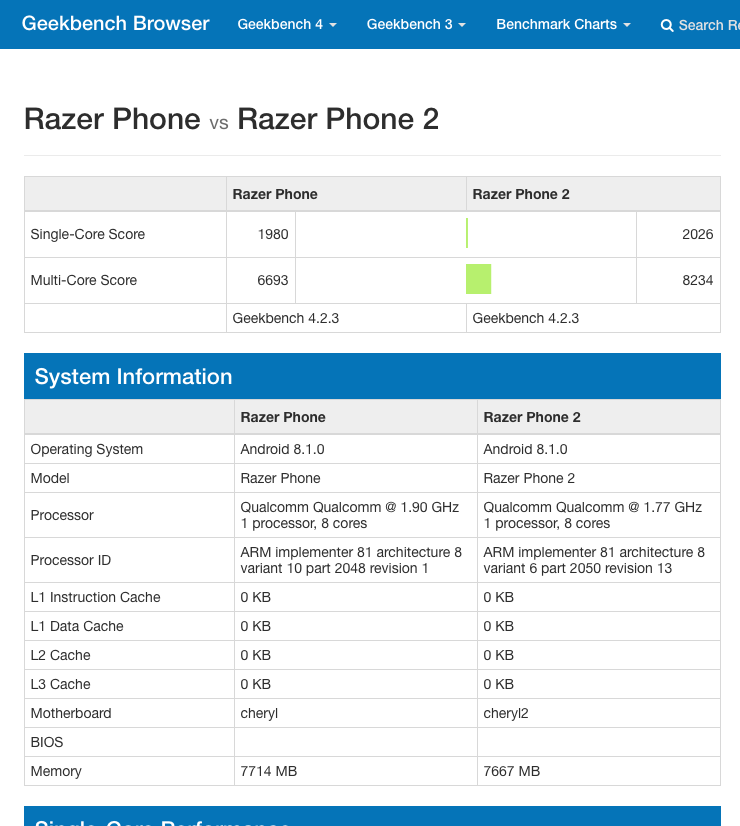 Benchmark results on Geekbench COULD be faked, and have been faked in the past, and that COULD be what’s going on here. But given what we know about Razer, what they’re planning, and what they released with the first Razer phone, this looks pretty gosh-darned believable. Cross your fingers for this or higher up in the final release version of this monster smartphone.

Have a peek at our original Razer Phone Review and stick around as we learn more about this generation 2 amalgamation of gaming finesse.