Qualcomm’s Gimbal is a proximity awareness device that pushes pertinent information depending on your location. By locating your device, retailers and others can push timely information to you. We’ve imagined quite a few use-case scenarios for the proximity-based information service, and at CES, we caught up with Qualcomm to chat about Gimbal.

Still in testing, Qualcomm’s Gimbal is seeing success early. Through various partnerships, Qualcomm has been seeding the technology and trailing it at various locations. One such prominent partnership is with the Miami Dolphins, where Qualcomm gives us a glimpse of Gimbal bend retail. Initial reports placed Gimbal as a retailers dream come true, where information about products in the department pushed to your device would entice you to buy. Apple has iBeacon in all of their stores for such scenarios, and it works well. Go to the accessories wall and try it for yourself. We have, and it’s sublime.

Gimbal’s use at Sun Life stadium, where the Dolphins play, encompasses a litany of uses we’ve not really thought of. Qualcomm tells us that Gimbal can push information at any point, and it is contextual to boot. In the parking lot enjoying a nice tailgating party? Gimbal can be used to let you know the game is going to start soon, and you should probably start making your way to your seat. It may even remind you who your team is playing that day, and push information about who’s hurt, or which team is favored. 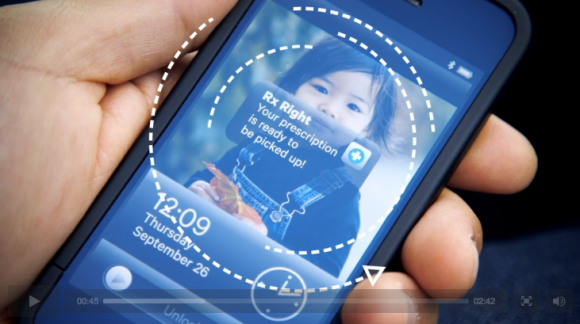 One such scenario explained to us about micro-location awareness was being at the stadium on a hot day. Perhaps an ice cream vendor at the top of the escalator is having a discounted offer, and that might be nice in such weather. The Gimbal knows you’re on the escalator heading up, and that the vendor is to your right after you get off. It pushed the right info at the right time, guiding you to ice cream bliss.

Maybe you’re in line for a hot dog, but there are shorter lines at another stand. Gimball sees you’ve been at that location for a while, and lets you know it’s probably safe to try another spot. Maybe there was an emergency in part of the stadium, and it’s closed off. Gimbal can feed you all that info, making it uniquely aware even when you’re not.