Smartphones may have taken a back-seat to TVs and car tech at CES, but Qualcomm is revealing the Snapdragon 835 that’s likely to be at the heart of many 2017 flagships. The new chipset is Qualcomm‘s first 10nm silicon, but the company is using the milestone for more than just competitive crowing. Indeed, the physically smaller package has big implications for the overall size of phones and other devices, as well as what they can do.

In fact, the Snapdragon 835 – which will be manufactured for Qualcomm by Samsung – will have a 35-percent smaller package size. That works out to around 3mm savings on each side. Though that might not sound like much, when you’re a smartphone manufacturer trying to fit as much as possible into as compact a form-factor as you can, every millimeter counts.

Indeed, Qualcomm explained to me, the usual layout in a smartphone is that the PCB is an L-shape, fitting around the battery. The width of the “L” is pretty much defined by the width of the chip. If you can shave even a small amount from that, you can potentially keep the phone the same size but fit a larger battery – or, conversely, have the same size battery but a smaller device. 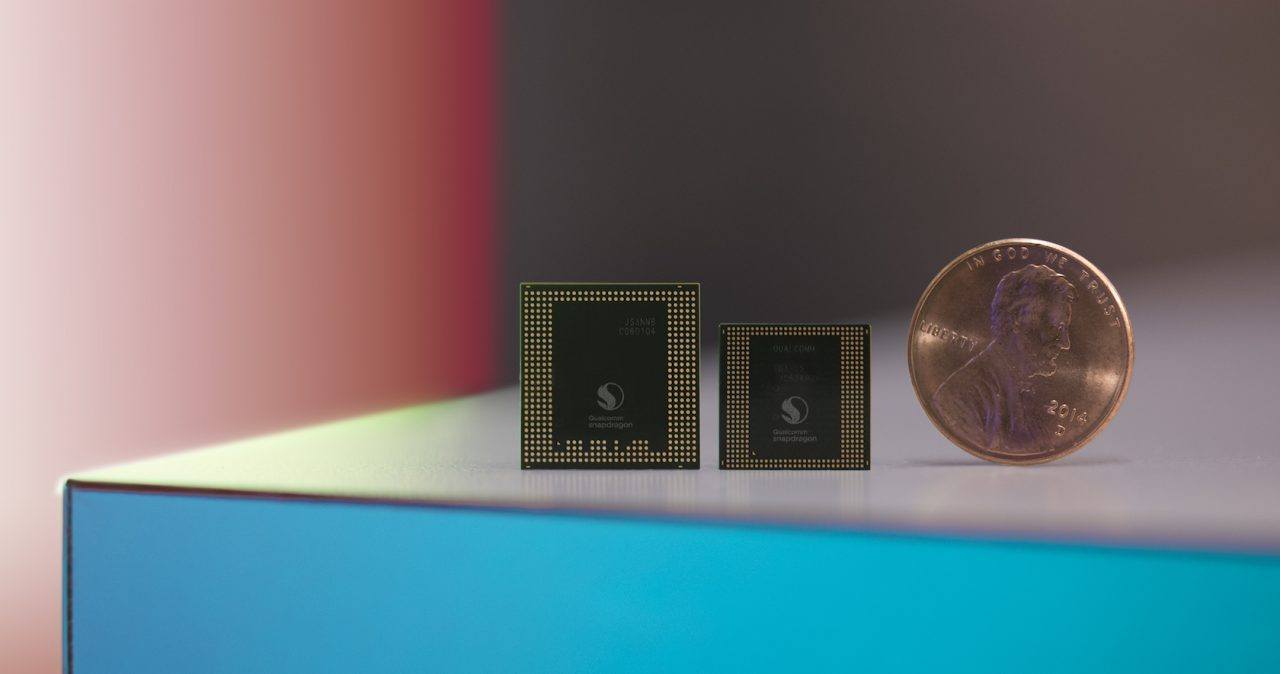 The scale advantages of 10nm haven’t all gone into physically shrinking the chip, mind. Qualcomm has had space for a new digital WiFi block, now integrated into the digital die for the first time in several generations. By doing so, the overall Snapdragon 835 PCB cuts size in half and power requirements by up to 60-percent, versus the old Snapdragon 820.

It’s a faster, smarter breed of wireless, too. There’s now 2×2 802.11ac MU-MIMO WiFi, along with Bluetooth 5.0, and Qualcomm has implemented more antenna sharing so that fewer overall antennas are required for the various radios. The new X16 Gigabit LTE modem is onboard, too, with Cat 16 downloads of up to one gigabit per second supported (if, of course, you could find a network capable of that, offering up to 4x carrier aggregation) and up to 150 Mbps Cat 13 LTE uploads.

Snapdragon 835, so Qualcomm tells me, focuses on five key areas. Perhaps the most important, at least to the majority of users, is battery life, and indeed there the chipset shows the biggest improvement over the Snapdragon 820/821. Overall, it uses around 25-percent less power, reportedly.

That’s partly because 10nm is simply more efficient than the old 14nm silicon. However, Qualcomm also redesigned how the cores are used, with a new “efficiency” cluster that attempts to maximize how many apps run on the more frugal four cores versus the more power-hungry performance cores.

There are software enhancements too, ensuring compatible apps run on the most efficient cores, though I’m told that there’ll be visible improvements even if developers don’t code their apps in the best-practice way to take advantage of that. Even without software changes, the new “neural processing engine” scheduler manages whether processes run on which CPU core, on the GPU, or in the Snapdragon 835’s DSP. In a best case scenario, there’s up to a 25x improvement in power efficiency.

So, Qualcomm is saying that devices based on the new Snapdragon will offer things like more than 24 hours of solid talktime on a charge, or capture 4K video for more than three hours straight. Playing virtual reality for more than two hours should be feasible, without either running out of power or – arguably even more pressing – overheating.

The new Hexagon DSP supports a fresh batch of machine-learning vector extensions, and there’s an always-aware hub on a separate power island that tracks movement and such. If according to the GPS you haven’t physically moved, for instance, the phone needn’t wake the cellular radios to re-search for the nearest base station. On the flip side, the already-announced Quick Charge 4 will mean five hours talktime from five minutes on a compatible charger.

Of course, actually talking on your phone is probably a minority use-case these days. The Snapdragon 835’s real focus is immersive applications, whether they be visual (like 4K gaming, VR, or augmented reality) or audio. The Adreno 540 promises 25-percent faster rendering and there’s now Q-SYNC to synchronize graphics perfectly to avoid dropping frames in virtual reality.

Foveated rendering with eye-tracking is now supported at the silicon level. If you’ve not been keeping up with the cutting-edge in VR, that allows headsets to track where the user is actually looking in the scene and concentrate GPU rendering at those points: because of how the human eye works, you see the higher-quality focus point and the lower-resolution (and thus more power-frugal) periphery doesn’t detract from the experience. It should mean better quality VR experiences that a smartphone can power, rather than demanding a full gaming PC.

On the audio side, there’s 32-bit processing and 3D audio support, adding a sense of height to what users will hear. Qualcomm has a 3D Audio SDK that’ll work with Snapdragon 835, and – since acquiring aptX – is promising better quality Bluetooth audio too, with half the power consumption. USB Type-C audio power consumption has been halved, too, and there’s the next generation of Fluence noise cancellation.

Indeed, while we may associate Snapdragon chips with phones and tablets, Qualcomm tells me it’s seeing a lot of designs already in-progress that use Snapdragon 835 in dedicated virtual reality and augmented reality wearables. For those wanting to make headsets where a smartphone snaps into place, meanwhile, the new chipset will be Google Daydream-ready. A jump from 8-bit to 10-bit graphics support means more than a 60x improvement in color space, with more granularity and a wider color gamut: Qualcomm expects that to be particularly useful in VR, given how close the eyes will be to displays, along with in e-commerce when shoppers will expect products seen on-screen to be color accurate.

Then there’s content capture. Sure enough, the maximum resolution of cameras Snapdragon 835 will play nicely with has increased: now up to 32-megapixels, in fact, and up to 4K Ultra HD 30 fps recording. However, though Qualcomm tells me that some smartphone OEMs are sticking with a single camera, there’s an increasing shift toward dual-sensors. As a result, the new chipset can handle twin 16-megapixel cameras.

For single-sensor setups, there’s now support for hybrid autofocus systems that combine laser, contrast, structured light, and dual-phase. Qualcomm is seeing two main avenues for dual-sensor adoption, meanwhile. First, there’s the addition of a wide, or telephoto lens, much as we saw Apple do with the iPhone 7 Plus. Qualcomm’s focus there has been streamlining how the output from both such cameras are fused, rather than having to manually switch between them.

The other approach is rarer – and, the company pointed out to me, more expensive – but involves combining a regular sensor with a mono sensor. That’s particularly beneficial for low-light photography, playing to the advantages of each sensor and keeping exposure times down.

With device security increasingly an area of concern, and phones relied upon for mobile banking and payments, Snapdragon 835 also offers improvements there. There’s hardware-based authentication support, whether from fingerprints, eye/facial recognition, or voice print, and each works with secure hardware tokens that allow service providers to compare an encrypted state report of the device – including whether it booted securely, what apps are running, and its GPS location – with that they’re expecting from the individual user.

If, for instance, someone in a foreign city tries to log into your bank account, the financial provider could use the token technology to spot that they’re not where you’re meant to be. A similar approach is taken with Secure Camera, which locks down visual data of things like iris scans throughout the entire pipeline, storing it in protected memory where it can’t be accessed by malicious apps. For those concerned about governments petitioning Qualcomm for access, the company tells me it literally won’t be able to unlock the raw iris information: that’ll be encrypted on service providers’ remote servers, and only the pattern compared with what’s kept locally.

Finally, there’s greater investment in machine learning. Snapdragon 835 has been optimized for computer vision, for instance, while a brace of supported machine learning frameworks – including Google-favored TensorFlow – should make it the chipset of choice for smarter apps. At the same time, Qualcomm is using the same technologies for security: if an app is spotted doing something malicious, for example, that can be reported up through an API to the device manufacturer or the carrier.

What’s notable about Snapdragon 835 is its breadth beyond just core processing and pushing graphics performance for mobile gaming. While it’s not the first chip Qualcomm has billed as ideal for virtual reality, secure mobile payments, and advanced computational photography, the advent of 10nm production – and the focus on power consumption – may finally unlock devices that can do all that without significant compromises in battery life.

Qualcomm, unsurprisingly, won’t be drawn on which devices we can expect to see powered by Snapdragon 835. However, we shouldn’t have long to wait for manufacturers to show their hand. The chips are already in large-scale production, the company tells me, and devices using them should be on sale in the first half of 2017.