It would appear that United States President Barack Obama will be showing no end to his interest in advancing home-grown scientific research efforts as the BRAIN Initiative was announced today. This research effort will take on the mighty task of revolutionizing our understanding of the human mind – no small task! Qualcomm’s CTO Matt Grob has let it be known that they are onboard with this effort and, as he joined the press event at the White House today, has assured the White House and the public that they’re bringing more than just a couple of their own innovations to the party.

BRAIN stands for Basic Research through Advancing Innovative Neurotechnologies, and through this initiative, scientists will be searching for new ways to treat, prevent, and cure brain disorders such as autism, epilepsy, traumatic brain injury, Alzheimer’s, and schizophrenia. Straight from the White House press room you’ll find this rather upbeat video narrated by the Director of the National Institutes of Health, Dr. Francis Collins.

The full White House Fact Sheet on BRAIN includes a paragraph or two on the first “public-private partnerships” in this effort, it including several institutions you may have heard of before.

Public-private partnerships: Federal research agencies will partner with companies, foundations, and private research institutions that are also investing in relevant neuroscience research, such as the Allen Institute, the Howard Hughes Medical Institute, the Kavli Foundation, and the Salk Institute for Biological Studies.

Qualcomm will be amongst those companies aiming to make a big push for BRAIN in both their internal efforts as well as through a co-development agreement with the Brain Corporation. The Brain Corporation is a private company that aims to develop brain-based mathematical algorithms, visual systems, and, with Qualcomm, “specialized neuromorphic hardware” that will one day bring “smart consumer products utilizing artificial nervous systems.” Rather exciting!

“Qualcomm supports today’s exciting announcement of the Basic Research through Advancing Innovative Neurotechnologies (BRAIN) Initiative, which aims to develop and implement new tools to collect and process large scale brain activity and to develop a theoretical framework to understand this brain activity. The BRAIN Initiative will necessitate stimulation and recording of an unprecedented number of neurons, requiring real-time data processing.

These goals will be facilitated by wireless data collection. Given Qualcomm’s rich heritage in wireless communications, we are well positioned to make contributions to the BRAIN Initiative. Furthermore, modeling of the functional connectivity of the brain will be a challenging task. Qualcomm is developing a neural simulation accelerator (Neuromorphic hardware) that can potentially enable large scale, real-time neural simulations, as well as a comprehensive software tool suite that will enable rapid development and analysis of neural models.

The Qualcomm Research team includes neuroscientists and applied mathematicians with a background in multi-unit cortical recordings and neural network modeling. Our innovations have included development of new mathematical models of processing and learning in neurons. In addition to Qualcomm’s internal efforts, we have a co-development agreement and an investment in the Brain Corporation (www.braincorporation.com ), with whom we are working on these initiatives. In sum, we have a vested interest in the success of the BRAIN Initiative, and we hope to apply new insights gained from the BRAIN Initiative to our development efforts concerning scalable Neuromorphic hardware.” – Matt Grob, CTO of Qualcomm

Sound line a positive set of moves to you? Let us know what you think of the BRAIN initiative and Qualcomm’s efforts to keep science powered up! 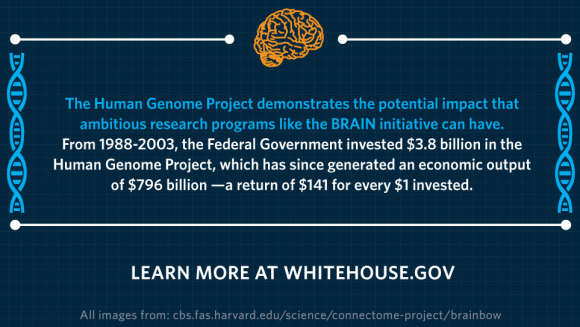