Qualcomm are holding their annual IQ event in London today, and while the company has confirmed that their 1.5GHz Snapdragon chipset for smartphones and tablets is due in Q1 2011 (Update: the 1.5GHz actually won’t be until near the end of 2011; the 1.2GHz will arrive in Q1 2011) more interesting perhaps is their AR photo frame demo. Currently running as an Android app, the system allows users to take a photo on their smartphone, point the handset’s camera at a digital photo frame, and then instantly squirt the image over to it.

After you tap the usual “Share” option in Android, then choose Photo Frame, the camera view shows you what you’re looking at in your living room. The system users AR technology to recognise each frame, highlighting it with a purple border; tap it, and the photo is automatically loaded over whatever wireless network you’re on.

So far Qualcomm aren’t saying exactly what they’ve done to create the system – obviously each frame has some degree of internet connectivity, and we’re guessing they’re pre-registered as your “home” displays – so we’ll be chasing up more details during the demo section of IQ 2010.

Update: We’ve just spoken with Qualcomm about the hardware and software behind the AR photo frame system, and it’s clever stuff.  It all centers on Qualcomm’s Augmented Reality SDK, running in this case on a Google Nexus One but compatible with any Android 2.1+ device, together with their P2P technology.  The frames are actually standard LCD monitors, each hooked up to a generic ASUS Eee Box PC running a custom app Qualcomm coded for the demo (with P2P functionality), and everything is on the same wireless network (we were told a regular WiFi router was used, though it was implied that Bluetooth could also be used for direct connections).

Rather than register each display to the phone, the system uses image recognition to identify them.  The AR engine knows what each picture frame is showing, and matches that to the view through the camera: when you tap on-screen to select it, the P2P engine automatically swaps the pictures over.

The downside is that all the displays being used must be showing something different, else the AR recognition system can’t differentiate between them.  Qualcomm aren’t looking to produce apps or displays themselves, but are expecting vendors using their AR SDK to offer similar services. 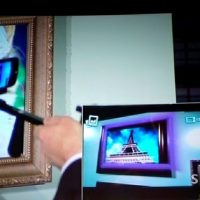 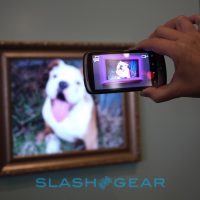 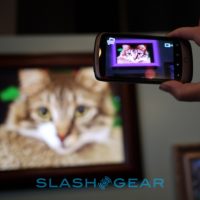 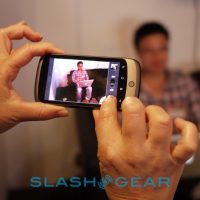 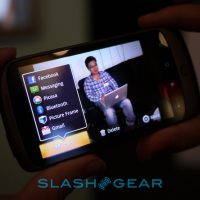 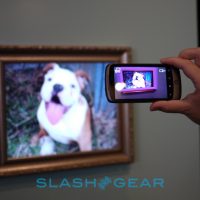 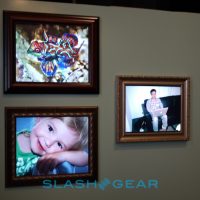