Open-source robot project Qbo has gained a new set of sensors, in the shape of a custom ASUS Xtion tiara that allows the ‘bot to 3D map his environment, autonomously navigate and – most importantly – avoid obstacles. While Qbo already has twin HD webcam eyes and four ultrasonic sensors (two up front and two on the back), adding in the Xtion Pro Live sensor bar augments the robot’s awareness of its environment, layering 3D on top of the 2D mapping it was already capable of recording.

“This sensor emits a 3D point cloud that, along with the robot’s odometry sensor and the incorporated gyroscope, enables Q.bo to build maps, 3D modeling of objects and autonomous localization in real-time” the TheCorpora team says of the modification. ASUS’ sensor is based on the same sort of 3D tracking technology as in Microsoft’s Kinect, but the Xtion Pro Live was picked because it is more compact. 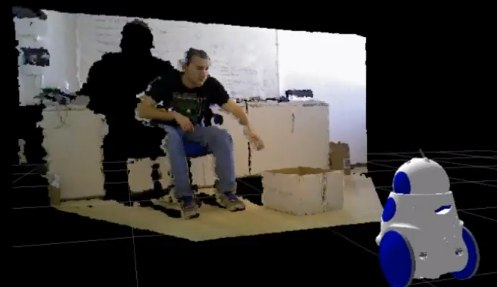 All combined, both 2D and 3D sensors are used for SLAM (Simultaneous Localization And Mapping), allowing Qbo to navigate around a changing environment autonomously. The Xtion sensor builds up a 2D map of the room which is cached and then overlaid with ad-hoc collision prevention data.

Qbo is, TheCorpora says, nearing the stage of commercial readiness, with the robot expected to go on sale sometime later in 2012. No word on pricing yet, however.