Joining the Jongo T4 wireless speaker and other offerings that Pure has introduced here at CES, the company has debuted the Evoke F4, a digital and Internet radio with multi-room system setup via the use of both WiFi and Bluetooth. Calling it the “Ultimate Radio,” Pure’s Evoke F4 is compatible with the Jongo multi-room music system, and brings support for Sirius XM Radio.

The Evoke F4 can be used as both a standalone device or in conjunction with other Pure Jongo products, allowing it to be integrated into a speaker setup that is already in place, for example. Jongo speakers can also be added onto the wireless network to expand the existing setup, whichever works best based on the user’s needs.

There’s Bluetooth connectivity for streaming for a device, whether it’s a tablet, smartphone, or Bluetooth-enabled computer. The Evoke F4 provides access to in excess of 20,000 Internet radio stations and 200,000 on-demand podcasts and radio programs globally. For those who don’t subscribe to any particular service, there’s also Pure Connect Blue for unlimited streaming of tracks, a subscription service initially priced at $4.99 USD monthly.

The Evoke F4 is a Class-D device with digital signal processing, equalization, loudspeaker correction, and sound profiling. Adding to the features is the ability to record live Internet radio to a USB flash drive, and there’s a kitchen timer, alarm system, OLED display, and touch controls. The Evoke F4 is priced at $229 USD. 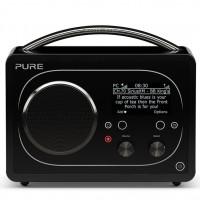