Project Spartan is now ‘Edge’, and will have Chrome extensions

Spartan was a cool working title for Microsoft’s browser. I really enjoyed it, but they’re not keeping it. Instead, they’ve come up with a new, ‘edgy’ title (pun intended). Instead of Spartan, they’re going with ‘Edge’. That’s right, Edge. Like from U2. The browser brings all the cool stuff we already knew about, like reader mode and notations, but is also sniping a bit of energy from another great browser. According to Microsoft, a bit more work on Edge will bring Chrome extensions.

So why “Edge”? Microsoft says it refers to being on “the edge of consuming and creating”. It also “refers to the Developer notion of being closest to the modern capabilities of the web.”

One handy feature of Edge is it’s understanding of the ecosystem. If you were to search for something or navigate to a site, Cortana may suggest accompanying apps.

So what else is on Edge? At the core, nothing too fancy. You’ll get reading mode, the ability to notate, and Cortana popping up at (hopefully) just the right time. 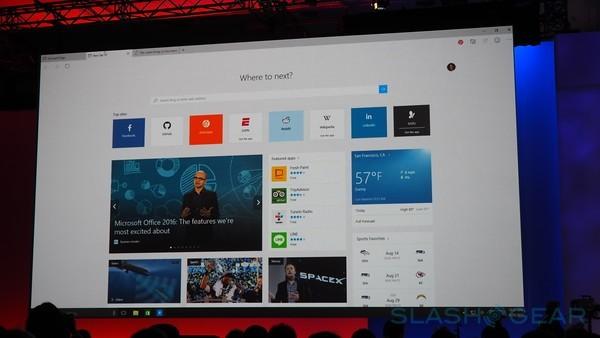 Microsoft says it’s meant for doing stuff, and when you think about how you do stuff in the browser, chances are extensions come into play. For those who use extensions to accomplish things, Microsoft isn’t asking that Developers build native Edge extensions so much as they want existing extensions.

Chrome extensions will soon come to Edge, much like Android and iOS apps are coming to Windows. With a “few minor modifications”, extensions already written for Chrome (or Firefox) can be used for Edge.

Like those Android and iOS apps, extensions will need to be submitted and accepted to Microsoft’s extension portal.