Products with Microbeads: why you need to stop using them, now

The dangers of using health and beauty products with microbeads have been explored in a paper published this week in at the ACS. With the American Chemical Society, researchers have (once again) confirmed a number of reasons why microbead products contaminate our shared environment, suggesting then that the inclusion of microbeads in all products be banned immediately. While some bans have begun, much of the world continues to allow the manufacture and distribution of microbeads without regulation.

When someone uses a product – like a face wash, for example – that has microbeads, several things happen. First – they get a unique kind of cleanse in their face that beauty companies suggest they can’t get any other way. Second – the microbeads (tiny pieces of plastic) are washed down the drain with water.

These microbeads do not get recycled. They do not get caught in filters before they hit the sea. They pollute. 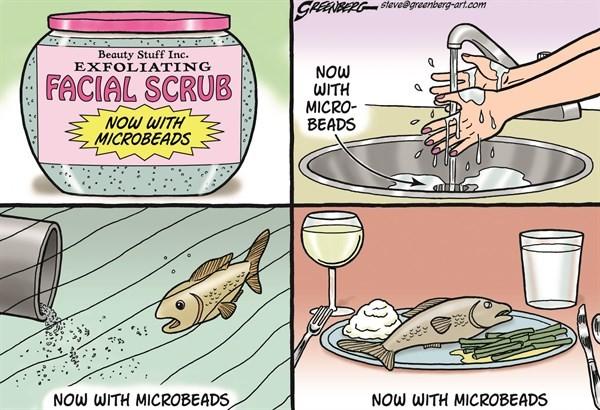 Comic above by Steve Greenberg.

According to the study published this week, “Because of their small size, some microbeads are littered into the environment via final effluent or biosolids (sewage sludge) from wastewater treatment plants and have become one of the many types of microplastic debris reported in aquatic habitats.”

Microbeads are eaten by animals in the water. Before they enter the bodies of animals, microbeads are able to absurd chemical pollutants. Once they do this, animals eat them, and – again, according to the paper published this week, this can cause “cellular necrosis, inflammation, and laceration of tissues.”

Also if you’re the sort of person that eats fish, you’ll also be in danger of eating the microbeads that’ve been pushed through the system, into the fish, and into you.

Photo of various microbeads on a penny via 5 Gyres – read more on legislation AB 888 there as well.

According to Chemical Watch, New York counties are still in the process of accepting a ban on microbead products after an Erie County ban that passed last month. The California State Senate has passed legislation to ban all sales of personal care products that contain microbeads just this past week – that’s legislation AB 888.

For a full list of products that use microbeads, head to the Beat the Microbead product list page. They’ve got lists of countries from Australia to the United States. South Korea coming soon!