Most of us (hopefully) know that our smartphones aren’t just snazzy glass, aluminum, and plastic, and that there are actually some hazardous materials lurking on the inside. The components of most smartphones are made using nasty stuff like PVC, mercury, tin, flame retardants, and lead, and though those chemicals and metals don’t pose much of threat to you while they’re all locked up inside your device, they could potentially contaminate the air and water if smartphones aren’t disposed of properly.

That’s the problem, too: for the most part, consumers typically don’t recycle their smartphones like they should, which could lead to environmental issues that no one wants to deal with. There is a glimmer of hope, however, as a new iFixit and HealthyStuff.org study has found that present-day smartphones contain fewer toxic chemicals than smartphones of the past. iFixit and HealthyStuff tore apart 36 different new and old smartphones for this test, including the iPhone 5. Once they had a look around to determine the amount the toxic chemicals present in each phone, each device was rated on a scale of 0 to 5, with 0 being the best possible score and 5 being the worst.

Of the devices tested, six were given a ranking of “low concern,” including the iPhone 5, the Motorola Citrus, and the Samsung Evergreen. 24 of the device were labeled as “medium concern,” including the Samsung Galaxy S III, the Motorola DROID X, and the BlackBerry Bold 9000, while the remaining six were grouped into the “high concern,” category. Phones that were given a high concern ranking include the Nokia N95, the iPhone 2G, and the BlackBerry Storm 9530. 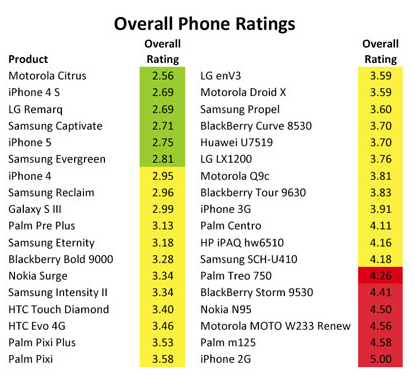 So, while there are still some pretty dangerous phones floating around out there, manufacturers are getting better at making their handsets more environmentally friendly. Apple in particular is showing great improvement with this test – while the second generation iPhone was given the worst possible score, both the iPhone 4S and the iPhone 5 were placed among the six best-rated handsets. iFixit and HealthyStuff warn that there is still progress to make, and even though the overall trend shows a reduction in these dangerous chemicals, “‘better’ is not ‘perfect.'” Let’s just hope that manufacturers keep it up and make handsets that are even more safe in the future.