Unlike with the first Galaxy Tab S, Samsung hasn’t been marketing the Galaxy Tab S2 as much, which is strange considering the line is supposedly its flagship Android tablet family. Perhaps its due to a worldwide somewhat negative attitude towards tablets in general. So it is somewhat not a surprise that a Galaxy Tab S3 isn’t making a big splash in Samsung’s rumor mill either. It might have even entered our radars if not for a sighting, coupled with some deduction, on GFXBench, hinting at its existence.

OK, so a Galaxy Tab S3 name isn’t established yet, but if we go by the model numbers, that can pretty much be speculated. One of the tablets sighted at GFXBench was named the Samsung SM-T819. Coincidentally, the 9.7-inch Galaxy Tab S2 was the SM-T810. There is also an SM-T719 seen, which is believed to be the 8.0-inch model of the Galaxy Tab S3, since the Galaxy Tab S2 of that same size was the SM-T710.

Then again, a Galaxy Tab S3 could be an SM-T820 or SM-T720 and these two tablets on GFXBench might simply be “half steps”, a theory that might be supported by the tablet’s listed specs.

The SM-T819’s display is the only one listed, noted to be a 9.7-inch 2048×1536, exactly the same as the Galaxy Tab S2. There’s also 3 GB of RAM, again the same size as the predecessor. Even the 8 megapixel main camera and 2 megapixel front camera seem to be similar. 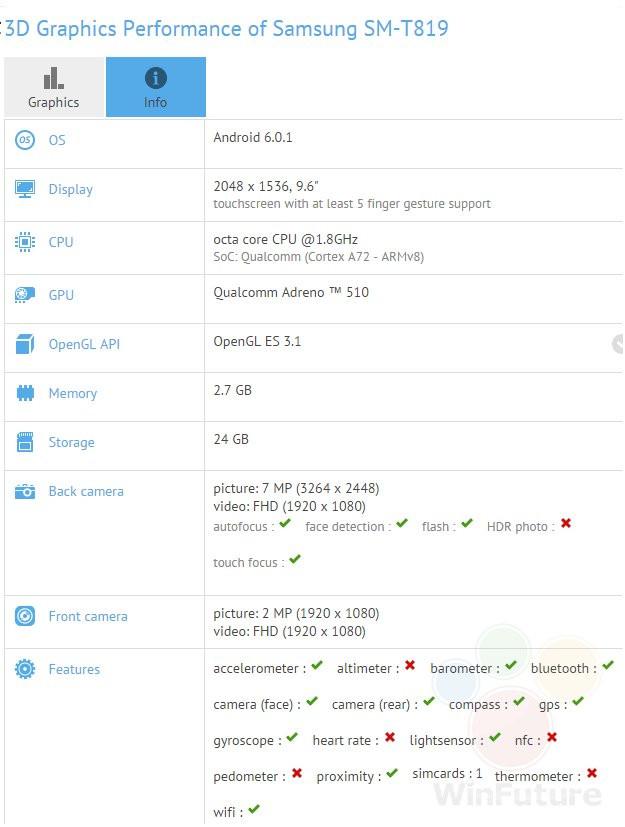 The key difference between the two is the CPU. The Galaxy Tab “S3” is believed to run on a Qualcomm Snapdragon 652, a higher mid-range chip that is composed of four energy efficient Cortex-A53 cores and four high performance Cortex-A72 cores running at 1.8 GHz. Whether that’s actually an improvement over the previous generation’s Exynos chip is yet to be seen.

And we might actually get to see it soon indeed. It is believed that this tablet, whatever its name will be, will also debut at MWC 2016 in just a few more days. Of course, it will most likely take a lesser place in Samsung’s event, but it could still give some Android tablet fans something to chew on these coming days.