Today the folks at Atari re-released the original game PONG as a stand-alone gaming experience. Just like the original PONG, this unit includes two controllers and just ONE game. Instead of requiring a television set to show video, this “Atari Mini PONG Jr.” is its own all-in-one system, including a 7.9-inch LCD panel for gameplay.

This is the gift you give your boomer dad when you don’t know what else he could possibly want for Christmas in the year 2020. Atari Mini PONG Jr. is roughly the size of a tablet – albeit thicker because of the dial controls – and it’s dead simple. One button and one dial per player, LAUNCH and control.

This machine has three rechargeable batteries inside, so you can play plugged in to USB or (once charged), wherever you may roam. UPDATE: Never mind! The batteries are sold separately. You’ll need to stay plugged in with the included USB cord and wall plug when you’re playing this PONG, unless you buy yourself three AA-batteries. 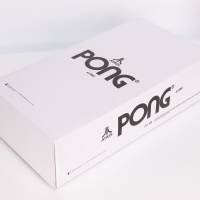 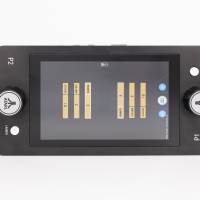 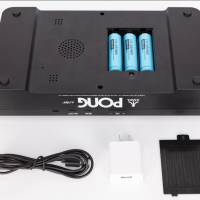 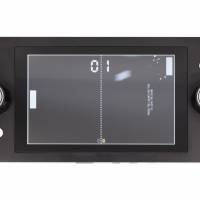 The 7.9-inch LCD display is controlled entirely by hardware dials and buttons. There’s a button to launch, and a dial to move the paddle back and forth. It’s like Breakout (brick breaker), but… for PONG. If you’re 30+ years old right now, you might remember the last massive sit-down console machines at restaurants/bars/pubs with the dial control – this is sort of like that, but far, far smaller.

UNIS Games suggests that the Atari Mini Pong Jr. will be available in time for the holidays in the year 2020. This should be true of North America and throughout Asia. Pricing has not yet been revealed for the hardware.