Pokemon tries to get scary with Junji Ito collaboration

Halloween, that time of year when people are undecided whether they should be adorable or frightening or frighteningly adorable. It is also a time when monsters come out of the shadows and land on store shelves to separate you from your money. Trying to jump in on the spirit of the season, Pokemon is teaming up with master horror comics illustrator Junji Ito to release a series of Halloween-themed products that you will still probably download and buy, even if they are the stuff of nightmares.

Lest we forget, the “mon” in Pokemon stands for monsters, but perhaps not in the same league as legends like Dracula, the Frankenstein monster, or a werewolf. But that doesn’t mean that these critters, some of which are too cute beyond all reason, don’t have their fair share of ghastly stories. Cute as it may be, that helmet that Cubone wears is the skull of its dead mother. Yamask is a ghost Pokemon that is said to have been human during ancient times. And yes, there are definitely ghost Pokemon. And there are some that are not exactly ghosts but are just as terrifying, like Banette, a doll-like creature that is possessed by pure hatred.

It is that latter Pokemon that Ito, who has under his pen horror comics such as Uzumaki, Gyo, and The Enigma of Amigara Fruit, has chosen to kick off Pokemon’s Kowapoke or “Scarypoke” event. The first illustration to come out is one of Banette stalking a little girl lovingly clutching her doll. The story goes that Banette is in search of its owner that threw it away for a newer replacement. And it isn’t searching for her to rekindle lost love. 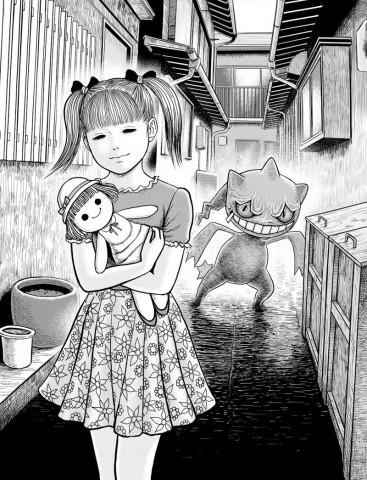 The Junji Ito Banette illustration is being offered for free as a wallpaper for mobile devices, but those really into the art can purchase a shirt with that design. The Pokemon website is also offering a few episodes of the anime that have some element of spook in them as well as very short comic strips of the same themes. Rest assured, though, that despite being Halloween themed, these are undoubtedly still child-friendly. More Junji Ito illustrations are expected to arrive, though those might end up a tad more for mature folks.

But horror gives way to sadness as you realize that the entire Kowapoke event is available only in Japanese, leaving a good part of the Pokemon-loving world out of the loop. Unless of course they have learned to read Nihongo. Hopefully, there will be an English version coming along, though when it will happen is still unknown.