Pokemon Sword and Shield Isle of Armor Review: A fun, but short, addition

If anything, it should be clear by now that Pokemon Sword and Shield represent some big departures for the series in general. For starters, they’re the first main-series games on a home console. Then we had the whole Pokedex controversy and the fact that a significant number of Pokemon were culled – the first time in the series that has happened. Now, for the first time ever, we have DLC, which seems to be taking the place of the “enhanced edition” we’d typically see release after paired games (à la Pokemon Yellow after Pokemon Red and Blue or Pokemon Platinum after Diamond and Pearl).

The Isle of Armor also features a new story, though it feels more appropriate to call it a side quest. In it, you’ll be joining a Dojo and completing a number of tasks before meeting the new legendary Pokemon Kubfu, who can evolve into Urshifu, a Pokemon with two different typing possibilities – the dual-type Urshifu you get depends on a choice you make toward the end of the Isle of Armor’s story. You’ll also meet a new rival that you’ll battle several times as you explore the new island. 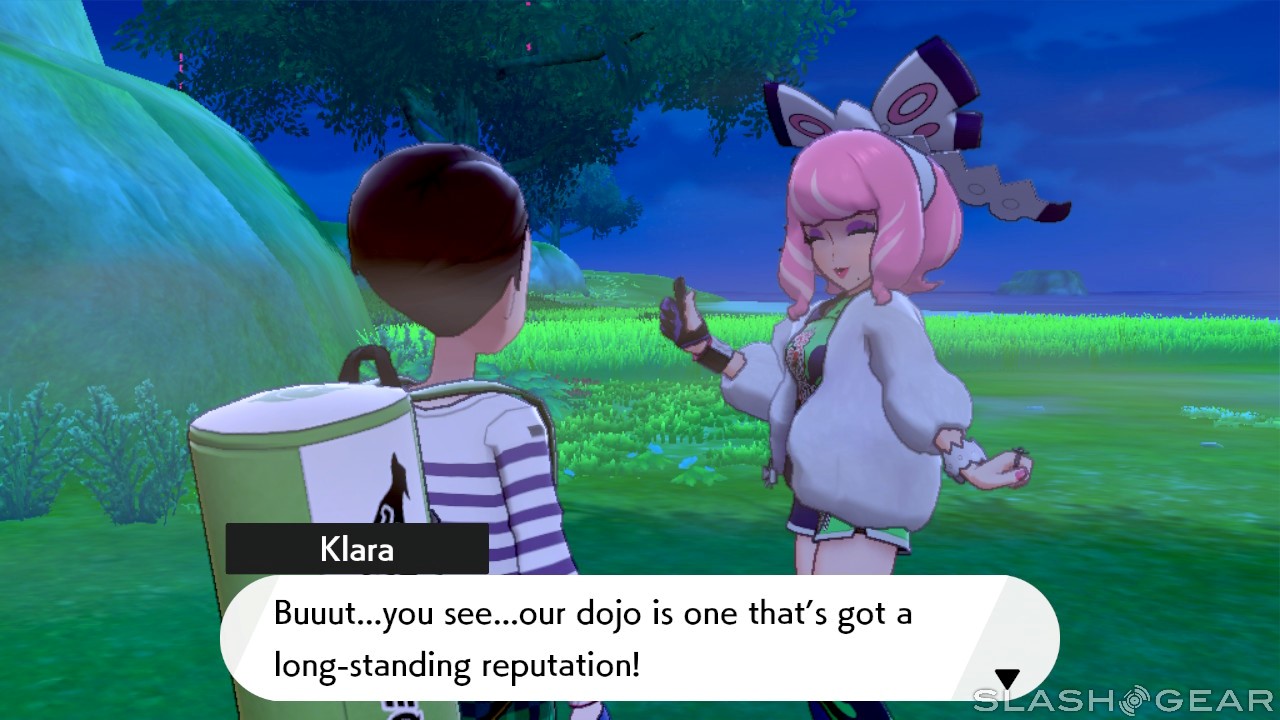 On the surface, it doesn’t seem like there’s a whole lot to the Isle of Armor. I was able to work my way through the expansion’s story somewhat quickly, leaving me with a new legendary Pokemon at my side and an island to explore more thoroughly. The Isle of Armor is like a more exciting Wild Area – save for a few buildings, the island is essentially an open world, with fields, caves, swamps, and even lagoons to explore.

Wild Pokemon walk around out in the open here, and when you first arrive on the island, it’s genuinely exciting to see returning favorites pop up in front of you. I think I had more fun exploring the Isle of Armor than I did the Wild Area, if only because the landscape of the Isle of Armor seems more varied to me. There also seems to be a lot of Pokemon from generations one and two returning in this expansion, which is another exciting thing for someone like me who’s been around from the start. 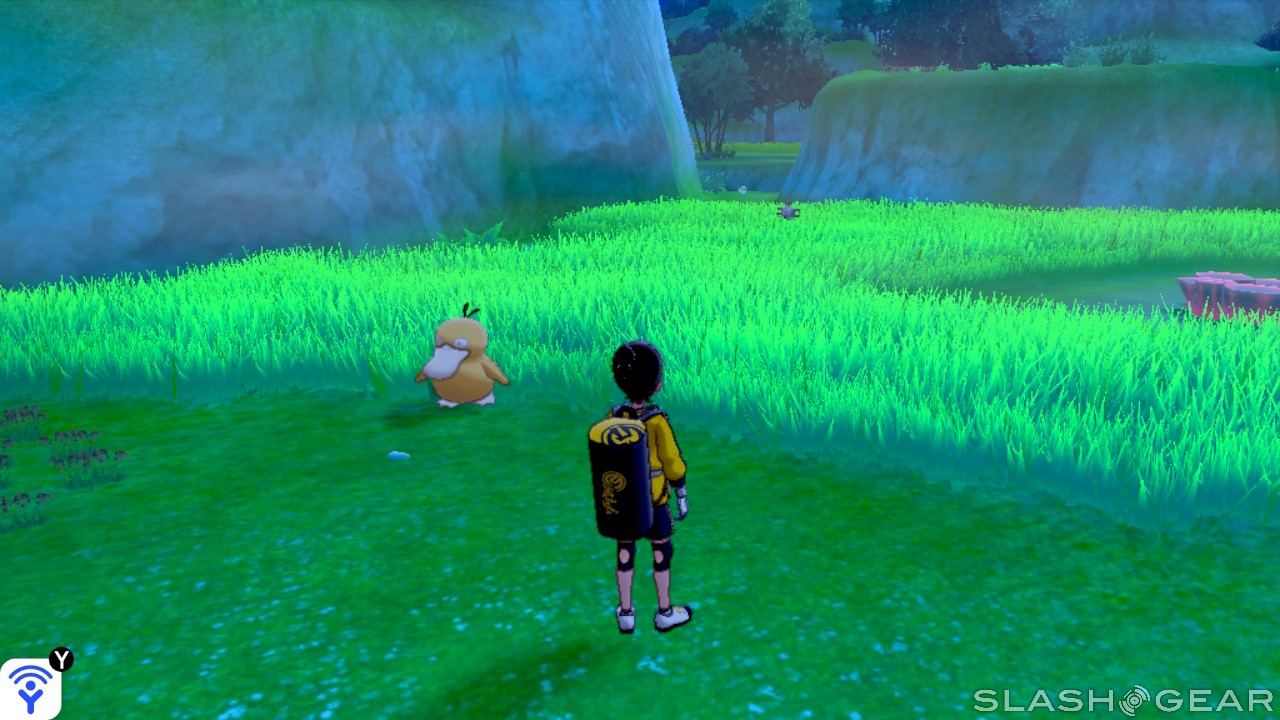 Since the Isle of Armor is more or less a new Wild Area, that means there aren’t any routes and, by extension, there aren’t very many trainer battles outside of the NPCs you fight at the Dojo. If there’s one thing I miss, it’s that – I like trainer battles (for the most part), but you don’t get to have very many until near the end of the story and beyond.

On the other side of that coin, one addition I really like is Restricted Sparring, a mode that limits you to using one Pokemon type and pits you against a string of often difficult opponents with only a couple of chances to heal. The only reward for succeeding here are battle points (BP), but I think a lot of players will really get into this.

Another aspect of the Isle of Armor I’ve been having a lot of fun with is the Diglett Hunt, which challenges players to find 150 Alolan Digletts scattered around the island. It’s sort of like searching for Koroks in Breath of the Wild and it’s a fun little distraction. One thing I will note is that it can get difficult to spot the Digletts in handheld mode because the graphics take a hit when you’re outside just as they do in the Wild Area, so if you’re going to do any significant hunting, you might want to do it on a TV. 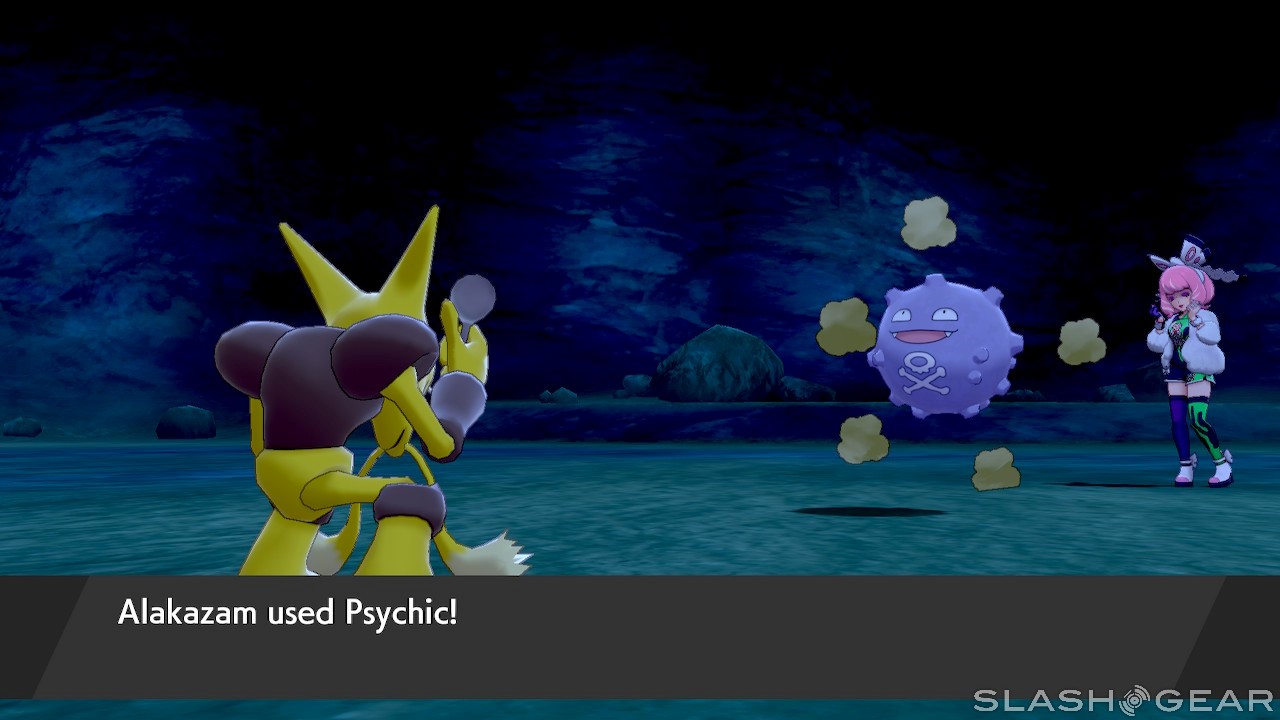 There are two additions in the Isle of Armor that I think a lot of players will really love, and the first is Max Soup. Max Soup is a major shortcut in that it can be fed to any Pokemon that’s typically capable of Gigantamaxing to give them Gigantamaxing capabilities, which is great for competitive players.

Usually, those Pokemon are only available through raid battles that can often be difficult to find, so if you’re looking for a specific Gigantamax Pokemon, this feature can save you a lot of time. Obviously, it isn’t as effortless as going into the Dojo and getting some soup – you’ll need to track down some relatively rare Max Mushrooms before you can actually make the soup – but it’s definitely a lot better than finding the raid you need or contending with Pokemon Sword and Shield’s awful online mode to find someone hosting that raid. 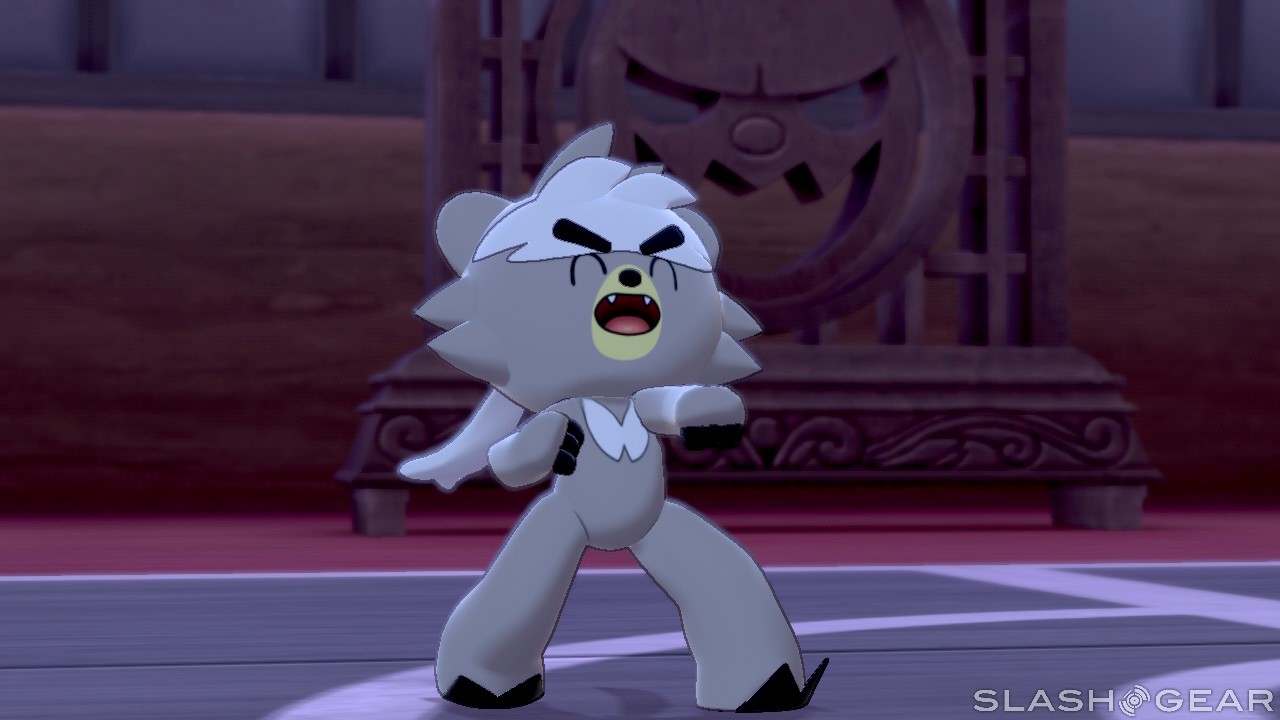 The other feature is one that SoulSilver and HeartGold adherents like myself will be excited about, and that’s the ability to have any Pokemon follow you when you’re exploring the island. You can only do this in the Isle of Armor, but regardless, it’s a really nice throwback to what I consider to be the best Pokemon games ever made (but come on, Game Freak: Let’s just make this a standard feature moving forward).

All in all, I think the Isle of Armor is a fun little adventure. If you burn through the story it can feel too short, but I think the value comes from exploring the island itself, catching a bunch of new – or, rather, returning – Pokemon, and doing all of the extra activities like the Diglett Hunt and Restricted Sparring. It seems like the Isle of Armor has a lot of value for competitive players specifically, though I also have to point out that I’m not much of a competitive player myself so I might be overestimating how handy things like Max Soup and Restricted Sparring as a source of BP actually are.

Ultimately, I think the Isle of Armor makes small improvements to many of the good things about Pokemon Sword and Shield. The island itself feels like a better Wild Area, the expansion makes it easier to obtain Gigantamax Pokemon (which I think is the coolest part about Dynamaxing Pokemon to begin with), and it offers players some challenge – something that is severely lacking in mainline Pokemon games – with Restricted Sparring. Really, the main draw for nearly everyone will be catching more Pokemon, as there are a lot of favorites from previous generations to catch in this expansion.

It isn’t a perfect expansion, of course. The story doesn’t feel all that significant in the grand scheme of things and, just like in the Wild Area, the graphics don’t look great when you’re exploring the island itself. I still think it’s weird that there’s no voice acting at all even though there’s often a big focus on what characters are saying and the Y-Comm is still an awful way to handle internet connectivity, but really those are issues with Sword and Shield as a whole. 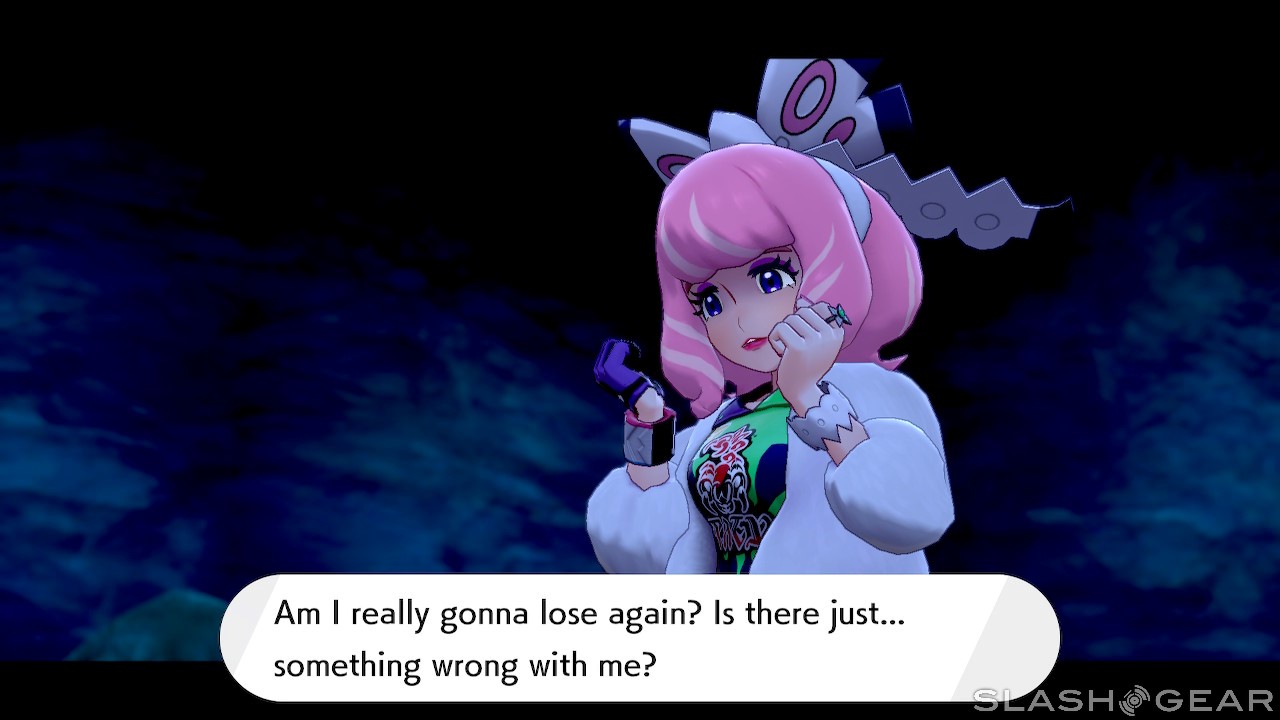 We’re in something of a weird spot because I wouldn’t say that the Isle of Armor is worth $30 on its own, and even though it isn’t the only DLC that will be available in the expansion pass, it’s the only part that’s available now. If the Crown Tundra is similar in scope and size to the Isle of Armor, then the expansion pass will be worth the cost. That won’t be launching until sometime this fall, so it could still be several months before we have the Crown Tundra in our hands, so to speak. Those who feel they can wait until the Crown Tundra releases are probably best served doing just that, if for no other reason than to make sure that Game Freak doesn’t drop the ball with the second expansion in the pass.