Although battling doesn’t have the same key role in Pokemon GO as it does in the game or the TV series (at least not yet), a Pokemon’s Combat Power or CP is still an important metric in choosing which Pokemon to keep or ignore, especially when you’re intent on duking it out in gyms. But if you’ve ever wondered how high your Pokemon can go, GamePress has a nifty list that ranks all 150 species according to their CP. Unsurprisingly, the ones with highest CP points are the Pokemon you can’t yet catch.

To the casual Pokemon GO player, the augmented reality game is nothing more than a novel way to collect cute, and some not so cute, virtual pets and hatch eggs. But for the more invested Pokemon trainer, Pokemon GO hides all sorts of complicated game mechanics, stats and calculations, one of which is CP, which determines the Pokemon’s Attack, Defense, and Stamina or HP.

CP, however, isn’t a static thing and grows as the Pokemon levels up. But even Pokemon have their limits too, and you might be curious if yours is even anywhere near the max. Or if the gym leader you plan on challenging has maxed out champs.

Luckily for Pokemon GO players and challengers, five of the top 10 Pokemon when it comes to CP points can’t be caught in the game. Or at all, depending on Niantic Labs’ plans. That includes Mewtwo, Mew and the legendary birds Moltres, Zapdos, and Articuno. However, the other five are indeed available in-game. To the shock of no one, Magikarp has the lowest CP rating. That is until it evolves. 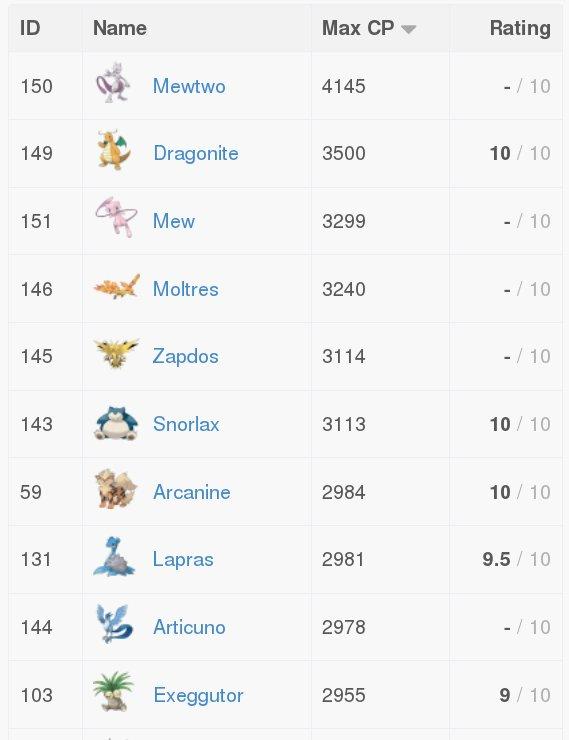 GamePress happens to hold a treasure of geeky info on Pokemon GO, from stat information and calculations, though most of these are based on more or less scientific guesswork. It’s a handy encyclopedia for hardcore Pokemon GO players and might come very handy if more involved Pokemon battles get implemented.