News of the Pokemon GO Rock Event suggests that Promo Codes are right around the corner – and that Adventure Week is about to begin. Today we’re going to make the event and preparation for the event easy for all users to digest. This event begins on Thursday in the afternoon – starting at 1PM Pacific Time, which is also noon 2PM Mountain Time, 3PM Central Time, and 4PM Eastern Time. If you live somewhere else in the world, you’re on your own!

Step One: Catch These Pokemon

First, behold the Pokemon that’ll be more common during this event. Just like the first event in the history of Pokemon GO, the Halloween Event, this event has a burgeoning blossom of monsters not normally quite so easy to catch. Or to find, for that matter. This time around it’s all about the Mountain Biome and Rock Type Pokemon.

The Pokemon with stars next to them have not specifically been mentioned by Niantic as coming to the game more commonly this next week. We’re listing here the full collection of rock Pokemon that WE are pretty sure are going to pop up more commonly. We’re crossing our fingers extra-hard for Corsola, as it were.

Buddy Pokemon during this event will be much, much easier to benefit from. Instead of having you walk 4KM, for example, for one single Pokemon Candy, this event cuts the distance down to 25% of its normal size. As such, a Pokemon that normally costs 4KM to walk for a single candy will now cost just 1KM instead!

Pokemon that you’ll want to try to walk during this event are… whatever you do so desire. The only big change might come with Eevee. While Eevee can evolve into one of two Pokemon as a result of walking an Eevee as a Buddy Pokemon, this method of evolution generally takes a hefty amount of distance (for such a small endgame). With this event, we might only have to walk a short way! Have a peek at the Eevee Candy Cycles Guide to see what this is all about.

Step Three: Spin SO many Pokestops

This event will allow the user to get so many Pokeballs that their backpack will most certainly explode. Pokeballs will be half-price – if a user wants to spend their real money on the game, that is to say. Or their gold coins from the game’s Gym component, but otherwise there’s still Pokestops.

And the Pokestops during this event are special. So very special that users will want to spin them all day long, because they’re going to be giving out more items than normal. We’re not sure yet if that means they’ll have more Special Items (Evolution Items) – but maybe! Spin to your heart’s content!

This week will recall the Magikarp event with a new special super-free hat for the masses. This new hat will be called the “Adventurer’s Hat” and it’ll definitely be completely monstrous. I personally hope it’ll make my character’s head look like a Geodude – but we’ll see. Stick around our @TeamPokemonGO Twitter Portal for more information as it arrives over the course of the entire event!

This Adventure Week event for Pokemon GO – aka the Rock Event – lines up perfectly with another Pokemon event. That event goes by the name Rock Gym Cup, and it’s appearing in Pokemon Duel. That’s a rock and roll with a Corsola, too! As it were, we’ve received an anonymous tip that Pokemon Duel MIGHT be the first place where a Pokemon GO Promo Code will appear – and that’s a big MIGHT. We do not have a history with this source yet – this is the first we’ve heard of them with a tip like this. 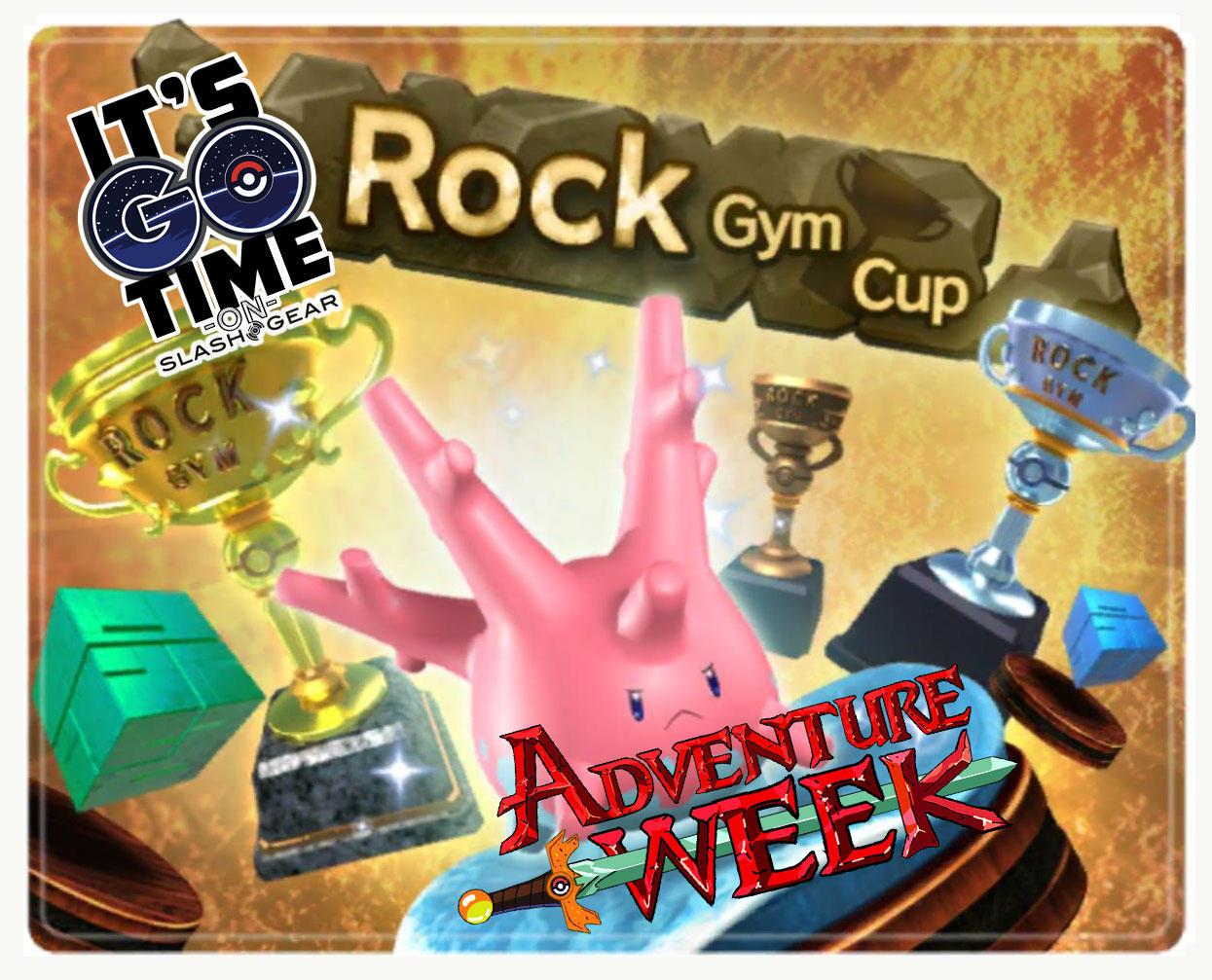 Regardless, Pokemon Duel is a fairly fun game that’s also free, and officially Pokemon Company made. That game is also available for both iOS (for iPhones) and Android! The rock event appearing in both games could mean something amazing, it could mean nothing! It could all be a big coincidence – but a real hardcore coincidence it’d have to be indeed!