Am I banned from Pokemon GO? It’s a question many gamers that’ve been playing in ways not quite “on the level” have been asking lately. Niantic has begun taking grander measures to destroy attempts to bypass their listed intentions with the game – especially those that include not actually playing the game on foot. Users that move around the Pokemon GO universe without moving their feet are subject to ban. Niantic is finding new and more innovative ways to find these people out before they move on to new techniques themselves. We’ve worked with several developers to find a variety of reasons why a person might be banned, how they’ll have been detected, and what their punishment will end up being.

Several new types of bans have been implemented by Niantic over the past couple of weeks – bans that come from developer innovations running a bit too deep for their liking. The “if this then that” of these bans suggest that they’re aimed at automatic bots – the bane of legitimate Pokemon GO gamers everywhere.

1. Pokestop over-use: Users will be banned when they tap and spin around 2-thousand Pokestops within a single day.

2. Pokemon over-catch: Users will be banned when they catch over 1-thousand Pokemon in a single day.*

*Even if a user caught one Pokemon every 5 minutes without fail for a full day, they’d only be capturing 288 monsters total. For a real user, catching 1,000 Pokemon in a single day isn’t actually possible without cheating.

The same goes for the Pokestop over-use rule – a user would need to spin more than one Pokestop every single minute for a full day to get anywhere near the 2-thousand spins mark. That’s just spins that produce loot, not the same Pokestop over and over again, one immediately after the other.

3. Too many accounts on the same IP: A user should not, under any circumstance, be running more than a single Pokemon account from their phone (or other nefarious devices) at once. Users will be banned when 3 or more accounts are running at once on the same IP – unless they’re just standing around doing nothing, or just hatching eggs by walking.

4, 5, 6, etc: There were already plenty of reasons why an account would be soft or hard-banned from Pokemon GO, including but not limited to: GPS coordinates/ server requests from 100’s of miles away made within minutes of one another, being caught (through various means) using a “bot”, attempting to access Niantic’s Pokemon GO servers through non-sanctioned means, or using a modified/hacked version of the Pokemon GO app file.

Data not received from server

At this time it does not appear that the “Data not received from server” message necessarily means an account is banned. It would seem instead to be an issue with uptime in actual servers near the user – though we’re not certain on that information, either.

If a user finds themselves seeing the “Data not received from server” message – or any other message for that matter – there’s a “Ban Appeal” page at Niantic’s Pokemon GO webspace now.

This Ban Appeal Form includes the following text, which can be confusing: 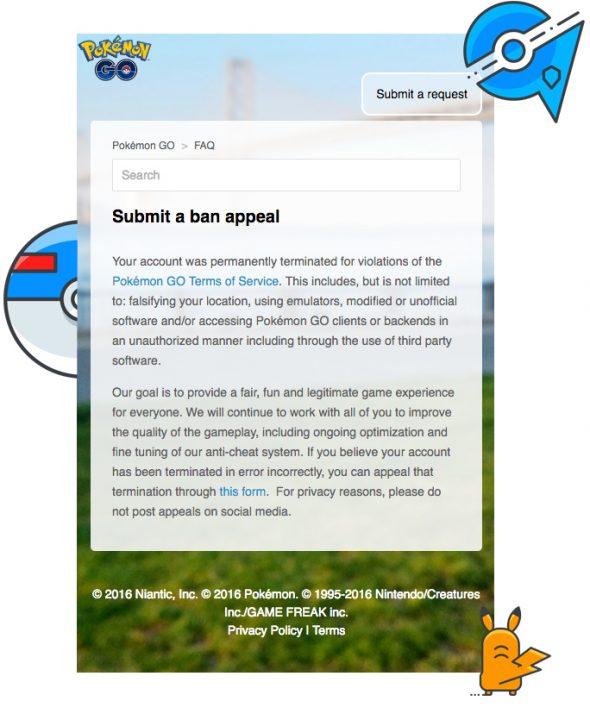 The text can be confusing to some users because the following sentence is included for anyone that reads it: “Your account was permanently terminated for violations of the Pokémon GO Terms of Service.”

Users could potentially see this message and not actually be banned at all. Don’t take that message as a guarantee.

Submitting an appeal seems to have little effect as of yet – we’ve found no reports of any appeal having any affect on an otherwise banned account. We shall see.

Stick around our @TeamPokemonGO Twitter portal for more new rules, tips, and updates from Pokemon GO.