What the Pokemon GO Adventure Week event was supposed to be is a little different from what it’s turned out to be. As far as news on promo codes – any rumors we’ve heard haven’t come up Milhouse, while rock type Pokemon in this event are not exactly the same as the list that some had envisioned. Today we’re taking a look at the details that are ACTUALLY in play VS what we were to expect.

Rock Pokemon actually out there

The list of Pokemon out in the wild differs ever-so-slightly from the list we’d assumed would appear. There’s been very few Corsola – not any more than what appeared before the start of the event. The same is true of the topmost powerful tier of Pokemon in the Rock Type collection. Shed a tear for those that expected a bunch of Tyranitar to be lurking about. 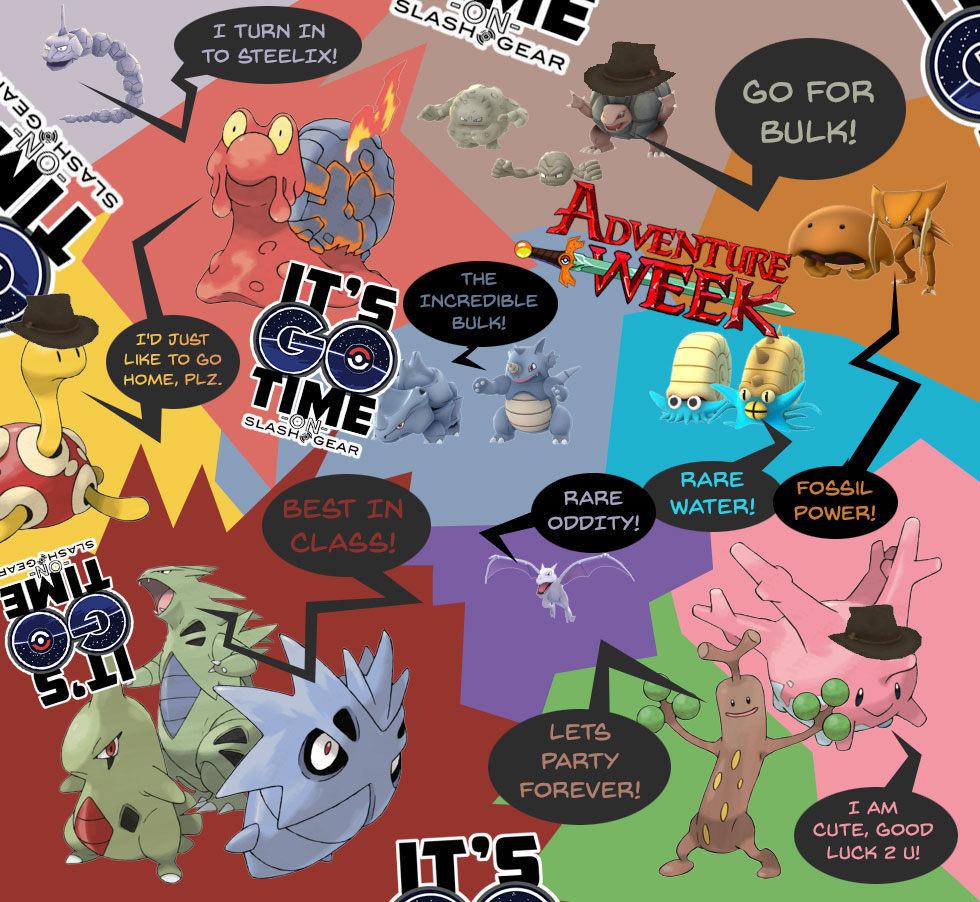 From most common to least common, here’s what we’ve accessed as the list for this Rock Event thus far: Geodude to Omastar. If you happen upon an Omastar, Kabutops, Aerodactyl, or Larvitar – consider yourself super lucky!

Hows this compare to the full list of Rock-Type Pokemon in Pokemon GO? It’s pretty darned close. We’re only missing the rarest of the rare on the list thus far. It’s not like they wont appear, but they’re not significantly more common.

Of note: The Pokemon with the star next to their name were not mentioned by Niantic before the event as being part of the event. If you’ve seen any other oddities that you’ve never seen in your biome before, by all means, let us know VIA our @TeamPokemonGO Twitter portal swift like a bunny!

Pokemon Trainer Club was down, indeed

The Pokemon Trainer Club login servers were down – if only for a few moments – when the Pokemon GO Adventure Week event began. You’re not losing your mind – not from tapping the login button incessantly, anyway. You might be losing your mind if you can’t see the adventure cap in the game, Indiana Jones style.

In the Caps section of the Pokemon GO clothing section is a new cap that looks shockingly similar to what Indiana Jones wears. This hat – up close and personal – includes a lovely little Pokeball pin, and comes in any color you like, just so long as it’s black. This hat will almost certainly continue to be free beyond the end of the event.

Pokeballs cost half as much as they normally would, for users that wish to toss real cash at them. Pokestops are dropping a few more items each time they’re spun – now more than usual. Both the Pokestops dropping more items and the Pokeballs being half their normal price are both in play to encourage users to go out and play more – a real super strong link to the Adventure Week theme, of course.

Walking Buddy Pokemon will result in 4x the standard amount for the same distance traveled. Instead of rewarding all four candies at once, this event has cut down the distance required to attain a single candy – so those that required 10km now only need 2.5km for a single candy. And the Eevee trick has not changed, sadly.

While it was generally assumed that walking Eevee for two full Candy cycles was the key to getting the two secret evolutions, it’s not. Instead it’s a full 10km, or 2x standard Candy cycles. See our full Eevee evolution guide if more information on the 4th and 5th evolution are desired.

The event began yesterday, the 18th of May, 2017. It began at 1PM Pacific, or 4PM Eastern Time. While Niantic suggests that the event will end exactly 7 days from that time, we’re skeptical. Basically every event in Pokemon GO’s 1+ year past has lasted just a bit longer than the standard end-time, and we’re gonna go ahead and guess that the same will happen this time around.

So while Niantic suggests that the event will end on the 25th of May at 1PM Pacific, we’re guessing it’ll be later. While I wouldn’t recommend placing any bets, there’s a good chance we’ll have a few more hours to see the Rock Type Pokemon after the bell.