It seems like everything is getting the “smart” prefix tacked onto it. We now have smart TVs, smart watches, smartphones, etc. Now, street signs are getting the treatment. A new sign technology called Points includes an LED panel that can display text, and it connects to the internet to show real-time information on the sign’s display.

Points is developed by Breakfast NY, and the smart sign can tap into various resources to show the most relevant information for pedestrians. The sign can also rotate its arrow-shaped displays to point to a specific direction and show a relevant event happening that way, like a sporting event or a concert.

Points can also use Foursquare, Twitter and other geotagging services to display trending locations around town and point people in the right direction. The signs can also display sports scores, news, and other updates in real-time. There’s also another sign option that can display a list of items and change them throughout the day, which can be perfect for restaurants with their daily specials. 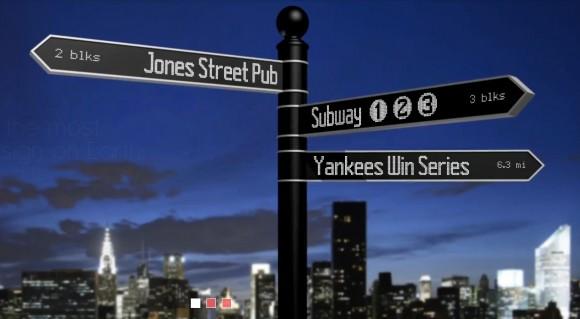 The sign system you see above consists of three separate signs that can each rotate 360-degrees around the post individually. They can also display their own information or the three of them can coordinate together to display a string of information or updates. The three signs collectively consist of 16,000 LEDs powered by an XMega processor.

Breakfast NY hopes that companies and local government bodies will get in on the action to have the signs placed in cities and at conferences, as well as at transit shops, sporting events, and concerts. Probably the niftiest part about the Points sign system is that it can be powered over a traditional three-prong outlet and uses 500 watts of power (about the same wattage as a small set of worklight). The company doesn’t list pricing, and says that those interested will have to get in contact with a quote, but we’re guessing these aren’t that cheap.