Sony has just officially announced its new motion controller at GDC 2010, and it’s dubbed the Playstation Move (for rather obvious reasons).  You’ll be able to acquire a Move in three packaged ways: bundled with a PS3, by itself, or in a starter kit targeted at “under $100” with the Playstation Eye, a controller, and a game, all slated for a Fall 2010 launch.

Gizmodo has a hands-on, and Editor Jason Chen takes a few looks (or rather, grips) on the Move:

“I just got hands on with two of the games, one is Socom, a shooter that has been adapted to use the Move and the sub-controller, the second is the Sports Champions swordfighting.

Socom, compared to point-and-shoot shooters on the Wii, was much smoother, much less jittery and more accurate. The combination of Move and PlayStation Eye seems to work well in this aspect, but it’s not exactly better to use this when you compare it to a standard controller or a Mouse + Keyboard. I can see this as better for novices to shooters, being able to aim where you want to shoot.

The other game, the Sports Champions sword + shield fighting, is about what you’d expect. It’s more or less 1:1 motion, like the Wii MotionPlus, but it’s not so much more accurate than the Wii that you’d call it a dramatic improvement. An improvement, yes, but not dramatic. The left hand also holds a controller in order to wave the shield around, and that was a bit awkward in my experience. Right hand was fine, left hand a bit awkward to control simultaneously.

Swinging the hammer to your left, or right, or over your head actually moves it on screen, but again, it’s not SO much better than Wii MotionPlus. The graphics, of course, are one generation higher, but the controls, ehhh.” 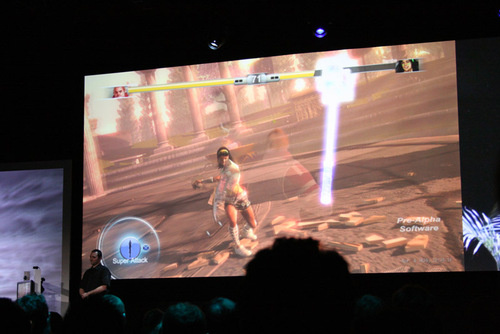